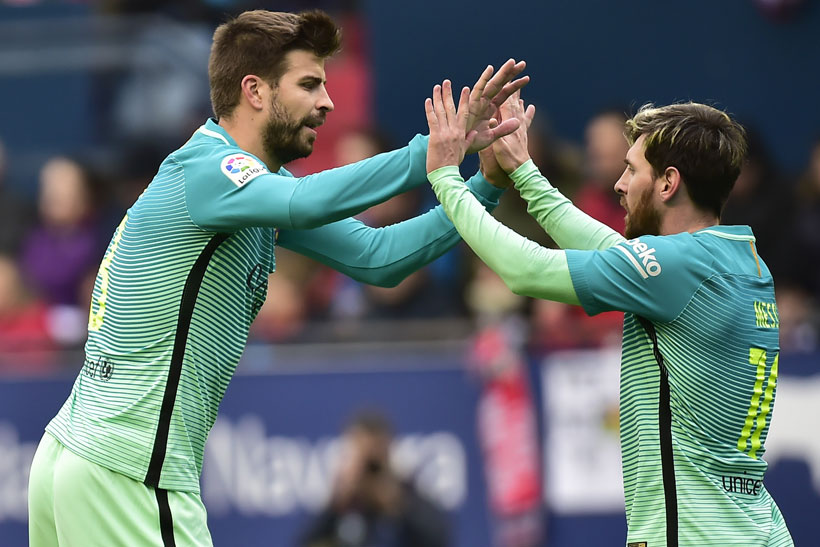 BARCELONA, Dec 10: Lionel Messi scored twice in the second half to lead Barcelona to a 3-0 win at Osasuna on Saturday, ending a run of three consecutive draws for the defending Spanish league champions.

Messi unlocked the hosts' defense in the 59th minute by threading a pass between four defenders to meet Jordi Alba's run into the area. The left back squared the ball for Luis Suarez to tap home.

In similar fashion, Alba set up Messi to side-foot in his first goal in the 73rd after substitute Denis Suarez played Alba clear.

Messi got his second goal in stoppage time, when he took on three defenders, picked his spot and rifled home a left-footed strike.

"We knew that once we scored the first goal the match would open up for us, and thankfully the goal came soon enough," Suarez said.

Barcelona's first win in four rounds came a week after it drew at home with league leader Madrid.

The victory at Osasuna put second-placed Barcelona within three points of Madrid before the pacesetter hosts Deportivo La Coruna later.

Suarez and Messi both went close to scoring several times early on at El Sadar Stadium.

Suarez shot wide and sent another attempt off the post before Messi failed to beat goalkeeper Nauzet Perez twice from close range.

Barcelona was without the suspended Neymar. Arda Turan started in his place and combined well with Andres Iniesta and Alba on the left of Barcelona's attack, before Denis Suarez replaced him after the opening goal.

Promoted Osasuna remained bottom and winless at home since its return to the top tier.

Sona wants to go to Spain and meet Messi!

Sona Thapa, 19, was excited that night to watch the match between Barcelona and PSG. She hadn’t forgotten the pain... Read More...