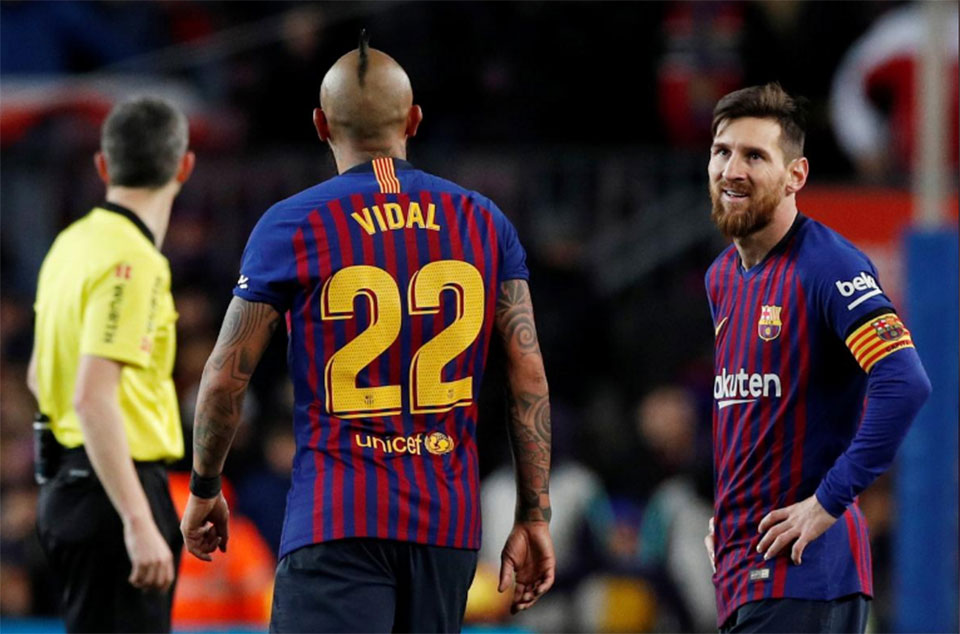 BARCELONA, Feb 3: Lionel Messi dragged Barcelona back from two goals down by scoring twice to snatch a 2-2 draw at home to Valencia in a thrilling encounter on Saturday which interrupted the La Liga leaders’ streak of eight consecutive league wins.

Valencia, who hit the woodwork in the second minute, went ahead in the 24th with a well-taken finish from French forward Kevin Gameiro and doubled their lead with a powerful penalty from Dani Parejo in the 32nd.

Messi halved the deficit seven minutes later by scoring for the ninth consecutive game in all competitions, converting from the spot after having a goal chalked off as the referee had already blown his whistle to award the penalty.

Barca’s insatiable captain equalised in the 64th with an unstoppable curling strike from outside the area, averting a first league loss for the league leaders since November and taking them on to 50 points from 22 games.

Messi had to be treated on the sidelines shortly after scoring his second goal but was able to come back on and finish the game.

“We have to wait until he does tests, I don’t know what he has, he is feeling some discomfort; I don’t think he’s very bad but I can’t give any information,” Valverde said.

Valverde’s side are six points ahead of nearest challengers Atletico Madrid, who visit Real Betis on Sunday, and 11 clear of third-placed Real Madrid, who host Alaves on Sunday.

Both teams had enjoyed remarkable comebacks during the week to reach the Copa del Rey semi-finals, with Barca thrashing Sevilla 6-1 to win 8-3 on aggregate and Valencia seeing off Getafe 3-1 for a 3-2 aggregate win with two goals in stoppage time.

Valverde, who had warned of the dangers of exhaustion at this stage of the season, started without Jordi Alba and was missing Sergio Busquets through suspension and Ousmane Dembele through injury.

Valencia, who began the season in the Champions League but have had a haphazard campaign and are seventh in the standings, looked to be on their way to a third league win in six visits to the Nou Camp after making a flying start.

Marcelino’s side’s strategy of intense pressing and rapid counter-attacks paid off with their two goals while their organisation and discipline prevented Barca from hitting top gear, even through Sergi Roberto almost equalised before the interval when his shot hit the post.

“We did not play well in the first half but then we showed our character and we dominated,” said Barca midfielder Ivan Rakitic.

“We put in a massive effort, it’s not easy to play against Valencia who were feeling more confident after their recent results.”

Valverde threw on Alba at the start of the second half and his side immediately looked more dangerous yet once again their fate rested on the brilliance of their all-time top scorer Messi, who struck his 21st league goal of the season to level the game.

“There was one moment when I didn’t suffer, and that’s when Messi was on the sidelines being treated,” said Valencia coach Marcelino.

“He is so decisive, he conditions the opponent completely. We are talking about an extraordinary player.”