Screen shots of a disrespectful picture of Prime Minister Oli in an editorial published by Times of India (Left) and a TV grab run by Zee News TV channel (Right).

People from various walks of life including political parties, media fraternity, civil society and intellectual community have vented their ire on social media particularly against a recent imaginary and defamatory show run by Zee News which has linked Prime Minister Oli with Chinese Ambassador to Nepal Hou Yanqi.

In the 16-minute show with a headline offensive toward PM Oli and Ambassador Hou, the two anchors tried to give an impression to the Indian audience that PM Oli is working at the behest of China and Hou is doing her best to meddle into Nepal's internal affairs. They even accused the Chinese ambassador of hatching conspiracies to harm Nepal-India relations.

Former Foreign Minister Kamal Thapa said, "We have serious differences with PM Oli on many issues, including his conduct of international relations. But deliberate/sustained campaign of mudslinging against PM Oli by some Indian media cannot be acceptable. That does not do Nepal-India relations any good." 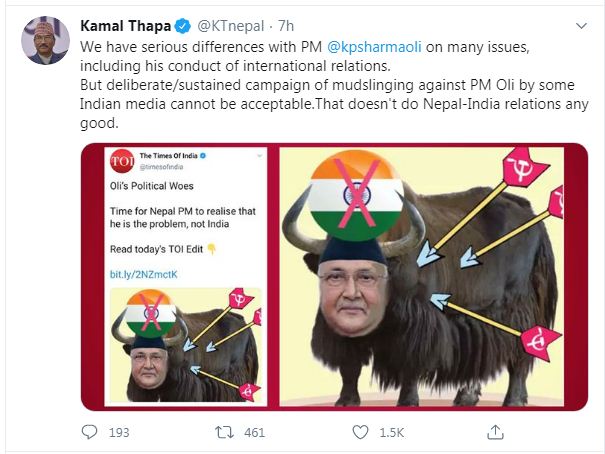 On Twitter, former foreign minister and the spokesperson for the ruling Nepal Communist Party (NCP), Narayan Kaji Shrestha said that the Indian media must stop the baseless propaganda against Nepal government and Prime Minister Oli.

Shrestha expressed his disbelief on the extent to which some media channels have gone to defame the current government. “The baseless propaganda by the Indian media against the Nepal government and Prime Minister Oli has crossed all limits. This is too much. Stop this utter nonsense.”

He went on to say “Nepal is always united as far as issues related to the country's sovereignty and territorial integrity are concerned. What we do here is our matter of concern. Divide and rule policies by external elements are uncalled for. They will not work here at all.”

The Federation of Nepalese Journalists, Press Council Nepal and other media organizations have also vented ire against the Indian media reports which ran news on PM Oli, linking him with the Chinese ambassador to Nepal.

We may seek political and legal remedies: Government

Meanwhile, the government on Thursday condemned a section of the Indian media which “engaged in the character assassination of Prime Minister KP Sharma Oli and Chinese Ambassador to Nepal recently.”

At a press conference, government spokesperson Yuba Raj Khatiwada said that the government may seek political and legal remedies through diplomatic channels against baseless Indian media coverage which has undermined Nepal's sovereignty and dignity. "We urge the entire media including from our neighboring countries not to undermine Nepal's sovereignty and dignity," the spokesperson said.

Prime Minister's Foreign Relations Advisor Rajan Bhattarai tweeted, "The news coming from Indian media against our PM and government after publication of the new map is condemnable. We completely reject their fabricated & fake reports. We urge them to respect Nepali government & people's unified position on our sovereignty & national independence."

Likewise, the prime minister's chief political advisor Bishnu Rimal tweeted, "The news stories and comments coming from the Indian media against the Government and Prime Minister of Nepal are highly objectionable thus condemnable. Such reports do not care about the basic ethics of journalism. The malicious intent inherent in such reports will only damage the age-old friendly ties existing between our two countries and peoples." 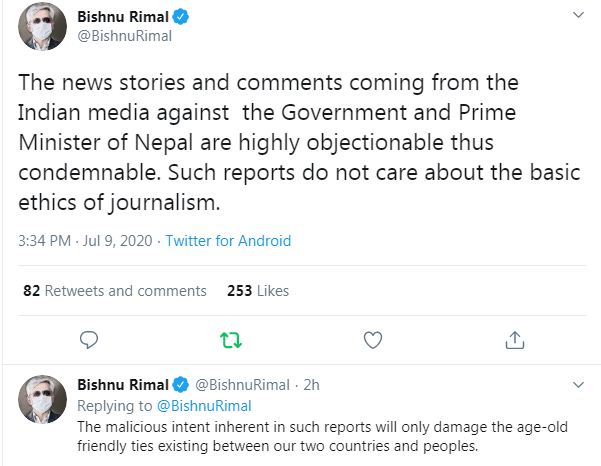 However, this is not the first time that India media made such allegations against the Nepal government and Prime Minister Oli. Earlier in May, Nepal's objection to India's unilateral inauguration of a road through Lipu Lekh, a sovereign Nepali territory, was horribly misinterpreted in Indian media. Basically, they said that Nepal is taking up this issue at someone else's behest. 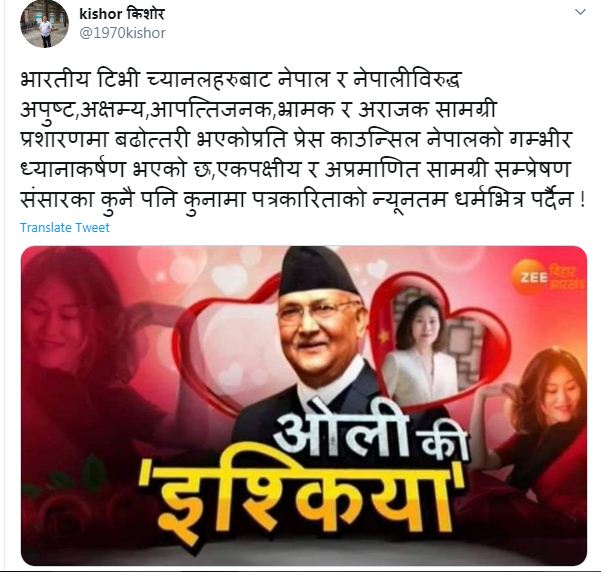 'I will pay attention to appropriate allocation of budget, increasing expenditure capacity'
22 hours ago