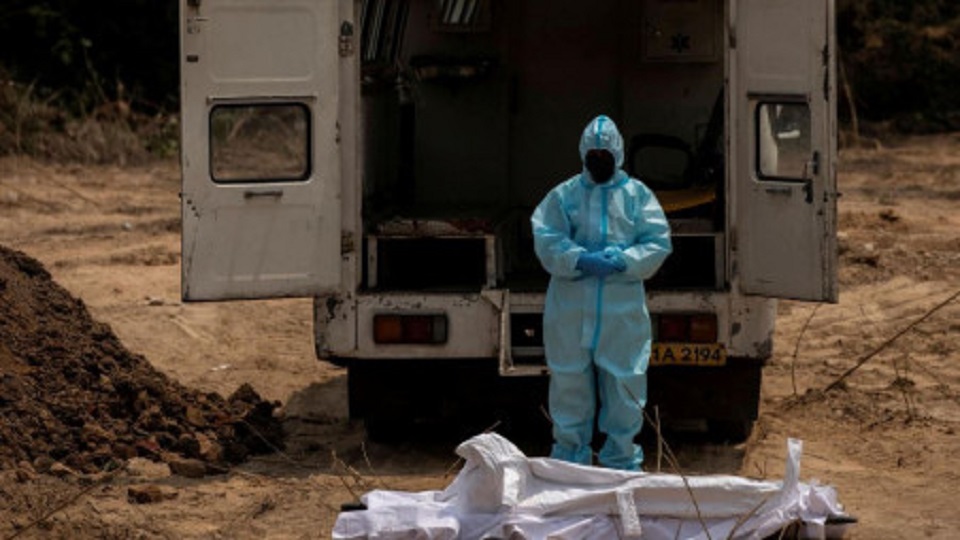 A man offers funeral prayers for a Central Reserve Police Force (CRPF) officer who died from the coronavirus disease (COVID-19), at a graveyard in New Delhi, India, April 29, 2020. REUTERS/Danish Siddiqui

NEW DELHI, April 30: India has recorded its 1,000th novel coronavirus death, but the head of a government think-tank said on Wednesday that its 1.3 billion people, strained from weeks of lockdown, were not experiencing the feared exponential surge in infections.

India has now reported 31,331 cases, including 1,007 deaths, according to figures from the Health Ministry. Neighbouring Pakistan has 15,282 confirmed cases amid concerns about worshippers gathering at mosques during the current holy month of Ramadan.

Indian Prime Minister Narendra Modi must decide soon whether to extend the world’s biggest lockdown, now 40 days old, beyond May 3.

Health officials say the shutdown has prevented an explosive surge of infections that would have crippled India’s modest health care system.

“Our analysis finds that the rate of growth in positive cases and fatalities has been consistently lower - linear but non-exponential,” said Amitabh Kant, chief executive of the government thinktank Niti Aayog.

Aayog urged a phased exit from the shutdown, but the government has a difficult decision ahead.

The big cities of Delhi, Mumbai, and Ahmedabad - which are also India’s economic growth engines - top the list of cases and there are no signs of the pandemic abating there, Health Minister Harsh Vardhan said.

“When I see Delhi’s COVID-19 map, I see only red and orange colors which is extremely worrying.”

Wednesday’s daily increase in cases, 1,897, was the highest in weeks.

Still, the scale of the outbreak is dwarfed by the United States or large western European countries.

In Afghanistan, 46 people tested positive in Kabul prisons, said Farhad Bayani, a spokesman for the prison administration, even as the Afghan government frees thousands of prisoners to curb the spread of the coronavirus.

Some of them include Taliban fighters, freed as part of a prisoner swap with the insurgent group under a U.S.-brokered peace process.

* Afghanistan has reported 1,939 cases, including 61 deaths

* the Maldives has reported 200 cases and no deaths

* Nepal has reported 57 cases and no deaths