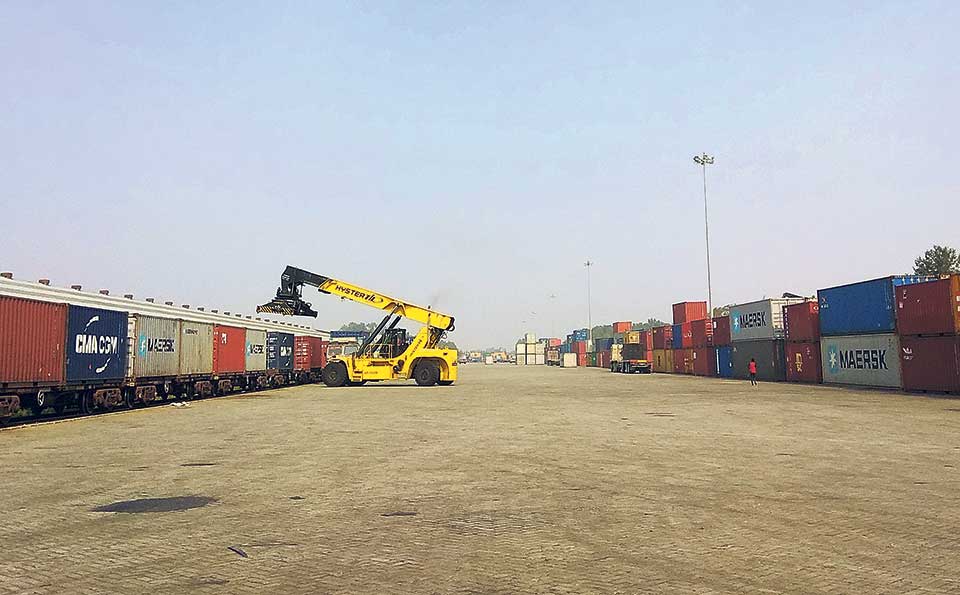 BIRGUNJ, Feb 3: Imports through Birgunj dry port is seen to be on the rise in recent months. The dry port based in Sirsiya, Birgunj, is the major port for importing goods from third countries.

Containers entering the port come via railway, mainly from the Indian port of Kolkata.

In the previous year, 30 racks of containers carrying goods entered the port per month in average. Based on an estimate that the monthly average would go up by 20 percent, 36 racks of container were expected to be imported per month this year. But the data of the past few months are much higher.

In January this year, 44 racks entered the port, while 42 racks were imported in December last year. The number was 40 in November.

Before November last year, the figures were at the average monthly rate, with 31 racks containing 2,790 containers entering the country in October.

"Since November, the number of containers entering through the port is growing. Last month, a record high number of containers came here," said Bishnu Kanta Chaudhary, chief executive officer of Himalyan Terminals Company which operates the dry port. Transportation has become smooth as all the concerned parties are working in harmony in recent times, resulting in rising imports through the port, Chaudhary added.

Last year, Nepali cargo import was affected for nearly a month as rains disrupted roadways and railways in Bihar, India. After that, port congestion at Kolkata started during the festive seasons (Dashain and Tihar) that continued for almost two months. Although the trade with third countries was affected in the beginning of the year, now it has bounced back, according to Om Prakash Sharma, president of Birgunj Chamber of Commerce and Industry (BCCI).

In the first 10 months of 2017, total of 283 racks had entered the country via Birgunj dry port. Majority of them, 258, arrived from Kolkata while 25 were brought from Visakhapatnam port of India. Officials of Container Corporation of India, a sister organization of Indian railway, have claimed that they have been giving high priority to facilitate transportation of containers to Nepal.

Rain with thunderstorm predicted for today
17 minutes ago