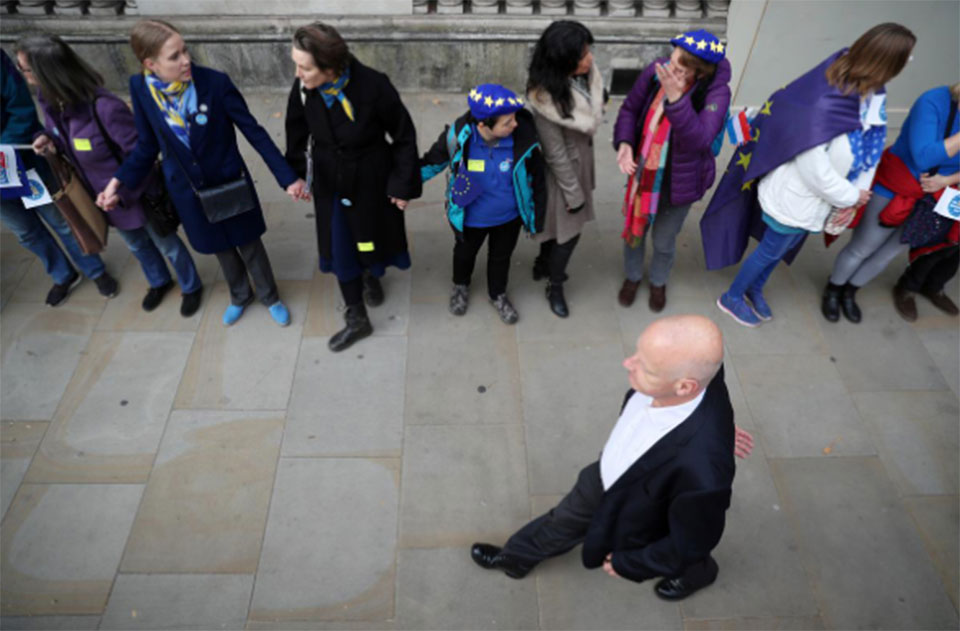 FILE PHOTO: Demonstrators form a chain between Downing Street and the Houses of Parliament as they take part in a protest by groups representing EU citizens living in the UK, in Westminster, London, Britain, November 5, 2018. REUTERS/Simon Dawson/File Photo

LONDON,  Aug 22: Net immigration to Britain sank to its lowest since 2013 during the year to the end of March, driven by a sustained fall in the number of immigrants from the European Union since 2016’s Brexit referendum, official figures showed on Thursday.

Rising immigration was a major public concern when Britain voted to leave the EU, though it has since dropped down people’s list of worries. Nonetheless, Prime Minister Boris Johnson’s government plans to introduce restrictions on EU migration as after Britain leaves the bloc on Oct. 31.

The data is based on a new experimental series that aims to reduce previous flaws that led to an undercounting of EU long-term immigrants and overestimating how many non-EU students remained in Britain after their studies.

This is one of the lowest figures in the past 10 years, though comparisons are approximate as the ONS has so far only applied its latest, more accurate estimation techniques to EU migration data from before June 2016.

DEBT CRISIS
Immigration to Britain from the rest of the European Union surged after the euro zone debt crisis in 2012, as southern Europeans sought better job opportunities in Britain, on top of east Europeans seeking higher wages.

Madeleine Sumption, director of the University of Oxford’s Migration Observatory, said the data pointed to a return to the pre-financial crisis trend in net EU migration, and widespread departures of current EU residents in Britain looked unlikely.

“EU emigration (is) still significant but now stable - and not the ‘mass post-Brexit exodus’ some talked about. Perhaps not surprising - most EU citizens (are) now resident here for a while, so are quite settled,” she said.

Immigration from outside the EU, which Britain’s government has much more legal control over, has steadily risen after a dip in the middle of the decade, despite a British government goal to cut total net immigration to under 100,000 a year.

Johnson has said that after Brexit, future immigrants from the EU will be subject to a “skills-based” test similar to that applied by Australia, as well as criminal record checks.

MigrationWatch, a group that wants less immigration, said after Thursday’s figures that inflows of immigrants were still “far too high” and that Brexit was a “golden opportunity” to impose greater controls.

A June 2019 poll by market researchers ICM showed that 53% of Britons wanted to reduce immigration, while only 13% wanted an increase. However, only 21% of respondents had a strongly negative view of immigration - slightly fewer than were strongly positive - and most were fairly indifferent.