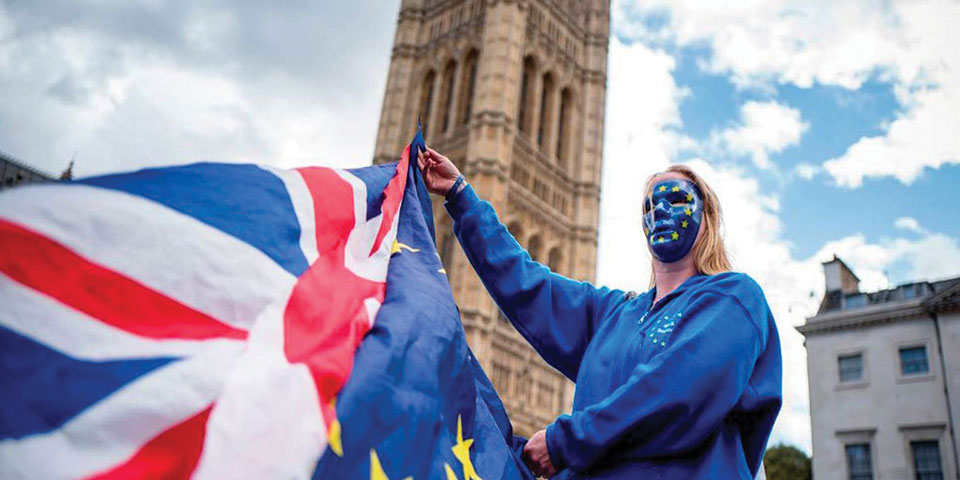 British voters’ growing emotional attachment to Remain or Leave poses a serious challenge to the country’s main political parties, each of which has deep internal divisions over Brexit

BRUSSELS – Far from settling the question of the United Kingdom’s future, the 2016 Brexit referendum and subsequent negotiations with the European Union have triggered a full-blown identity crisis and culture war in Britain. Two years after the UK electorate voted by 52 percent  to 48 percent  to withdraw from the EU, it is safe to say that former Prime Minister David Cameron’s ploy to settle a long-running niche debate within the Conservative Party has backfired spectacularly.

Brexit has left British political and social life more divided than ever. While the Brexiteers are peddling increasingly divisive –– even violent –– rhetoric, hundreds of thousands of “Remainers” recently marched through London, calling for a “people’s vote” to approve whatever exit deal the government proposes.

According to a new report from the UK’s National Center for Social Research, support for or opposition to Brexit is increasingly supplanting party affiliation as the defining factor in British political identities. Specifically, the researchers find that, “Nearly nine in ten members of our panel said that they were either a ‘Remainer’ or a ‘Leaver,’ whereas less than two-thirds of them claim to identify with a political party.”

British voters’ growing emotional attachment to Remain or Leave poses a serious challenge to the country’s main political parties, each of which has deep internal divisions over Brexit. And as the recent demonstration in London showed, these disagreements will not be resolved anytime soon. Ironically, the UK is now home to one of the largest grassroots pro-EU movements in Europe. So, even if the UK government can conclude withdrawal negotiations with the EU in the coming weeks, debates within Britain about the future UK-EU relationship will remain intense and protracted.

One way to bridge the divide and heal Britain’s fractured politics is to forge a close but flexible “association agreement” of the kind that the European Parliament has proposed. Association agreements are a proven method of facilitating cross-border cooperation. In the case of Brexit, such an arrangement could protect both the UK government’s “red lines” and the integrity of EU decision-making.

Brexit has had a profound effect on EU politics, too. Polling commissioned by the European Parliament finds that overall support for EU membership has increased significantly since the Brexit referendum. Deepening divisions within the UK and a painful divorce process seem to have raised awareness about the benefits of EU membership and the costs of populism, while galvanizing all those who still favor an open society.

Recent political developments seem to bear out these findings. Although the Euroskeptic Swedish Democrats had been tipped to make significant gains in Sweden’s general election in September, more moderate parties routed them. And as support for EU membership has increased, the Swedish Democrats have had to back away from advocating a full EU exit.

Similarly, though Italy’s populists, led by the right-wing League party leader Matteo Salvini, have stepped up their propaganda against “Brussels,” they have also had to retreat from their previous position of supporting an Italian exit from the EU or the eurozone.

These examples would seem to indicate a shift in continental Euroskepticism. Anti-EU parties have abandoned openly advocating the bloc’s destruction and begun to focus more on pushing center-right parties toward the populist and nationalist extremes.

To defeat these parties, centrists, liberals, and democrats need to do more than defend the status quo. They also must demonstrate that by opposing solutions to common European problems, populists are putting their narrow personal and political interests ahead of “the people’s” interests. Even more to the point, pro-Europeans must offer practical solutions to voters’ concerns about migration and unemployment.

The recent regional elections in Bavaria and Hesse, and German Chancellor Angela Merkel’s announced retirement, have underscored the crisis of traditional center-left and center-right parties. As mainstream parties struggle to adapt to voters’ frustrations and the new polarization of European politics, smaller parties have expanded their reach by offering more succinct visions for change.

But these smaller parties are not limited to upstart nationalist movements such as the Alternative für Deutschland (AfD) in Germany. Recent municipal elections across Poland have shown that liberal-democratic parties are more than capable of hitting back against populism. Despite the ruling right-wing Law and Justice (PiS) party’s politicization of the press, centrist, pro-European candidates made significant gains.

Brexit, the rise of populists like US President Donald Trump, and profound changes in the media through which politicians interact with voters have left established political identities more fragmented than ever. But just as this has created an opening for populists, it also presents opportunities for those seeking to form new national and pan-European movements centered around EU values.

Europe’s people are hungry for change. Now is the time for the majority of Europeans who still support EU membership to make themselves heard.

Guy Verhofstadt, a former Belgian prime minister, is President of the Alliance of Liberals and Democrats for Europe Group (ALDE) in the European Parliament.
© 2018, Project Syndicate
www.project-syndicate.org