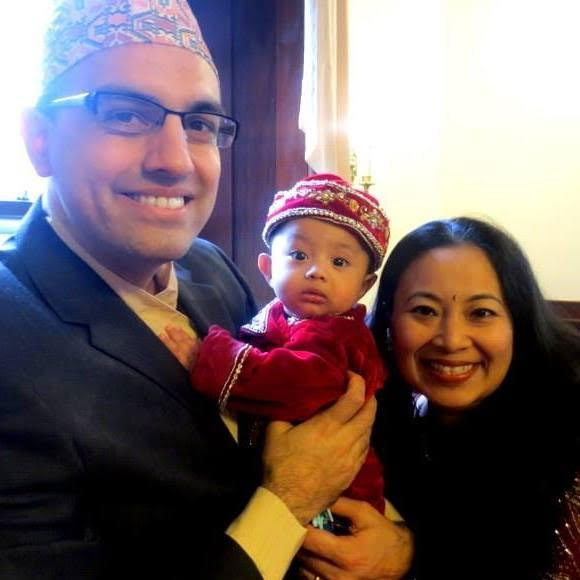 The John Bates Clark Medal is awarded annually by the American Economic Association (AEA) to “that American economist under the age of forty who is judged to have made the most significant contribution to economic thought and knowledge.”  Parag Pathak, 37, is a professor at Massachusetts Institute of Technology. His research proved that school choice can lead to improved student performance.

The AEA said on Friday in a statement on its website that his work “blends institutional knowledge, theoretical sophistication, and careful empirical analysis to provide insights that are of immediate value to important public-policy issues.”

Prof. Pathak with his wife Ruma Rajbhandari and sons: Avishek and Prithvi

Also called the mini Nobel Prize, the recipients of the medal have almost a one-in-three chance of winning the Nobel Prize in economics. Past winners of the award include Nobel laureates Milton Friedman and Paul Krugman.

What did you study in Harvard? What was your PhD thesis on?

I studied Applied Mathematics at Harvard.  My PhD thesis was on Market Design, a branch of microeconomics which tries to engineer better ways to allocate resources.

Have you visited Nepal? When was the last time you were here?

I have visited several times. I was last there in June 2016.

I understand Nepali and speak elementary Nepali. I have two children - one named Avishek who is 4, and the other Prithvi who is 2.  They both understand Nepali. My wife Ruma Rajbhandari is also Nepali. She grew up in Patan and went to high school in Nepal before coming to the US.  Her parents still reside in Jhamsikhel.

Tell us more about your research on charter schools in Boston?

Charter schools are a relatively new educational model.  A publicly funded school operates under a "charter" or contract, under which they can have more autonomy and freedom from regulation. We have found encouraging evidence that urban charter schools in Boston and in other big cities are making a very positive difference in the educational outcomes of disadvantaged kids.

Are there components of research you have done that might be applicable to policy-making here in Nepal?

The broad aim of my research is to try to improve the productivity of the public sector.  We have focused mainly on public education in the US, but I hope the areas we have focused on here hold broader lessons relevant for Nepal and other places.

Are you in touch with the Nepali community in Boston area?

I used to be more in touch with the community when I first came to college in Boston.  My parents were heavily involved in the early days of the Association of Nepalis in the Americas (ANA).  The first ANA conference was in 1983 in my home town in Corning, New York. I think there are even some pictures of my performance in the cultural program from those years.

Have you supervised any Nepali students at MIT?

I have not supervised any Nepali students at MIT.  But there are a handful of Nepali students at MIT and also at Harvard, doing exciting things across a variety of disciplines from engineering to medicine to law.  As far as I know, we've had one student from Nepal do his PhD in economics at MIT a few years ago.

What are your childhood memories of Nepal, if you visited here as a child?

My first trip to Nepal was in 1990, when I was 10 years old.  I have many fond memories of that trip -- I was so excited about the idea of bargaining in the shops.  My grandmother (who still resides in Kathmandu) tells me that I was so interested in bargaining that I even tried to bargain at the pharmacy as a kid!

I follow them only at a distance. There's a lot to keep up with!

A common theme of economic research on education is how central it is for the livelihood of countries and their economic success.  In the short to medium term, I hope to continue my research on these issues. It may be possible that over the longer term some of these ideas may have more practical implications for Nepal and elsewhere.