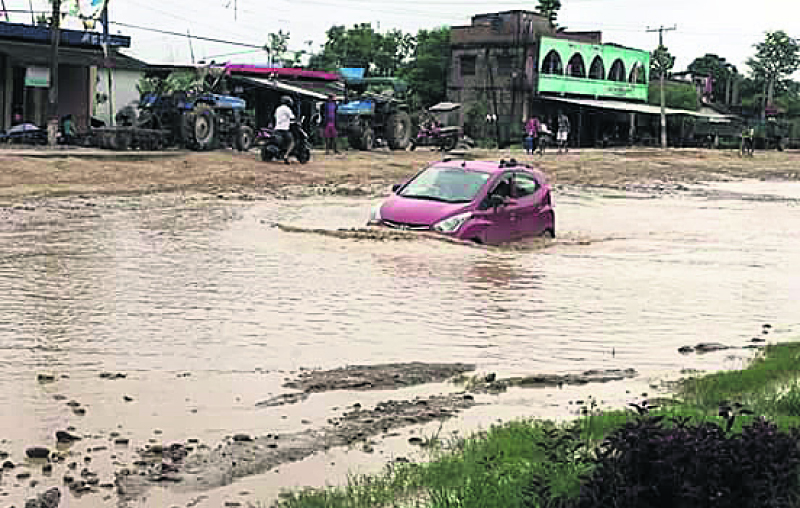 BARDIYA, July 7: Krishna Sigdel of Madhuwan Municipality was going back home from the district headquarters, Gulariya, on Wednesday evening. His car did not move further as it got trapped in the mud. After trying hard to get the car out of the mud, he realized that it was time for him to abandon the car.

He managed to get off the car that was almost inundated in water and mud of the Hulaki Highway. He took out his mobile phone, snapped a photo and posted it on Facebook. The photo went viral in seconds. Many named it a ship drowning in sea. Some commented that the driver must be privileged to experience such an adventurous sea voyage. Some locals of Bardiya laughed out the sticky situation the driver went through and some others took it as a representation of the woes they have to go through each day.

The post triggered anger against the administration for ignoring the road condition, despite the apparent troubles the residents were facing. Sigdel, who is a businessman by profession, said that it was not the first time that he got into such a sticky situation. He has been a victim of the muddy road in the past.

“It is hard to differentiate whether it is a road or a river. Forget the potholes, at some sections of the road, the flow of the water is so strong that you feel as if you are driving across a high current river,” he said.

This Hulaki Highway is actually one of the most ambitious road projects of the country and has been a subject of discussion and interests for many years now. However, locals lament that the government has never been really serious about upgrading it.

“It took five hours for me to drive 24 kilometers of the road from Rajapur to Gulariya on Thursday,” shared Saugat Rijal of Rajapur who was spotted in Gulariya. Though he was still inside the car, he looked tired and his clothes soiled with mud. “I had to get off my car several times and push it out of mud and slippery potholes. And see now I look as if I just returned from a muddy paddy field,” he lamented. “Many like me are forced to reach the headquarters like this every time. We have no other option than that, thanks to sluggish administration,” he fumed.

Locals blame concerned government authorities of not working responsibly for upgrading the road. However, the authorities shift the blame on contractors. According to Dharmaraj Neupane, executive head of the Madhuwan Municipality, contractors show many excuses for not completing work on time. The entire market area in Gulariya is submerged in water and that is due to the negligence of the contractors, he claimed.

“On one hand, the nearby Babai Irrigation Canal blocks water from draining out of the town and on the other hand contractors do not start or complete their road upgrade contracts on agreed time,” he said.

“The highway was already in a dilapidated state and was seriously in need of upgrades. The dysfunctional drainage in the market area, worsened the highway,” he noted. With rain falling everyday in the area, the area is now flooded and roads are inundated.

Rijal stated that thousands of people drive through the highway daily and yet the government has not shown an urgency to ease the transportation. “It is designated as a highway. But does it look like one? It looks like a good paddy field!,” he said.

The Rajapur-Dhodari, Gulariya-Dhodhari and Dhodari-Bhurigaun section of the highway which in total is 57 kilometers long, are worst affected. Construction materials meant for upgrading the road are piled on the both sides of the highway. Locals said the contractors were supposed to upgrade the road before the monsoon started but complained that they have not been seen around for a long time.

“The construction materials were brought many weeks back. But we haven’t seen the contractors around since then. Many of the materials might have been stolen away so far,” said Rijal.

Local businesspersons lament that the road has taken serious toll on their businesses. “Due the dilapidated condition of the road, we are bearing huge losses every day,” said Shambhu Rijal, chairperson of the Krishna Sagar Transportation Entrepreneurs Association.

In its early stage, the highway was supposed to be constructed by India. But later on the government took over the reins to implement the project. Immediate past Minister for Physical Infrastructure and Transport, Ramesh Lekhak, had inaugurated the road construction six months ago. But since then there hasn’t been much progress in completing it.

Krishna Shah, a resident of Khairichandanpur, people have least hopes of this road ever being upgraded to its supposed standard. “The road has been waiting long for being completed, but so far nothing has been done. We don’t think it ever will,” he said.

LALITPUR, July 30: The construction of private houses of beneficiaries – legally partitioned yet having joint ownership of land –... Read More...

KOHALPUR, Dec 18: The forest cover along the Nepalgunj - Baghauda section of the Hulaki highway is fast disappearing. Instead, small... Read More...

Construction of Kaligandaki Highway gets expedited

PHALEBAS (Parbat), Oct 6: Left in dilapidated condition for around a decade, construction of the Kaligandaki Highway that links Indian... Read More...