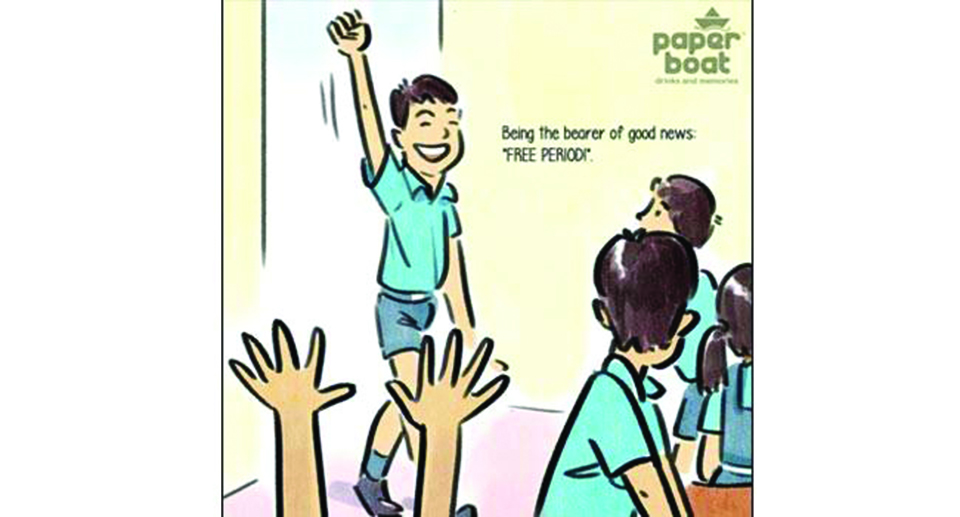 The simple fact of life is that it is inherently complex. And this complexity is nowhere more manifested and evident than in the present. Retrospection, even bordering nostalgia, is a refuge we like to resort to once in a while to restore simplicity in our lives. In this hopeless romanticism of the past, we often fail to acknowledge that our past was once our present with its own set of complexities. But 20/20 hindsight vision provides an opportunity to have a critical take on our past to uncover the ideologies we were once subjected to. When I look back at 13 years of school life at GEMS, one word describes my experience: brutal. Not that I was bullied or harassed, but I the perpetrator. Brutal because of how efficiently and sinisterly I was conditioned to be part of a system and take up a certain role.

Yanis Varoufakis in‘Marx predicted our present crisis – and points the way out’ argues that everything from search engines to robots (to school system) once released in a capitalist system inherits the values of capitalism, including its stringent inequality between different sets of people. My school was no exception. A large private educational enterprise owned by a stout capitalist. It was run like a capitalist institution with all the characters and their differences akin to the capitalist regime found outside the school premises.

To better understand how my school functioned we need to grasp characters like the strict teacher, the good student, the hardworking student, the failure, and the troublemaker, and their differences. My school was an exclusively bourgeois school with students of mainly the ruling castes, but even it needed differences. Someone who was rebellious was deemed a troublemaker to enhance the goodness of those who confirmed.

I remember taking up the role of a troublemaker from as early as grade two. I can recall my block in-charge, a strict tall upright fellow named B.D Niroula coming to me and asking me to step aside from the assembly line and inspecting my uniform and nails on a regular basis. I was perhaps the only one from my class facing this daily inspection. Had it happened to me today, I would be embarrassed. But back in the day, it felt very normal.

I feel the normalcy because I was made “a subject” of the school’s discourse. Foucault argues that discourse is a set of disciplining mechanism in a given institute that mandates you to take up a certain role and act in certain ways to maintain the circulation of the power and harmony in the system. Discourse determines a person’s position in an institution and how he is to conduct himself and what can and cannot be said or done.

As a “bad” student, I knew what were the things I had to do, the things I had to say, and where I fit in- in the school system. It was not enforced upon me, quite the opposite since I was rather coerced to keep my uniform tidy, nails trimmed, and homework completed. But under the masquerade of discipline, I was being groomed to become what they really wanted me to be: a renegade that ought to be punished. I had a role to play as a counterbalance to those “good” students whose goodness was to be gauzed at the expense of my untidiness and incomplete homework. My inefficiency had to be “gazed” by the good students to realize how not to conduct oneself in a bourgeois capitalist society.

As I got older, I got better at my role; moving from one mischief to another. One trip to the block-in charge’s office to another, and excelling at playing part of a despicable foul-mouthed disobedient student, as mandated by the discourse. To acknowledge that I was a bad student, I had to be treated accordingly. I firstly had to be perceived dirty, ill-mannered, and academically weak student to be despised and ridiculed.

The system ran mostly on consent. Good students knew their role and I understood mine. But consent alone could not sustain the discourse all the time. Therefore, violence was used often to reinforce everyone’s position in the system. The violence came in the form of beatings which were public spectacle. I remember a teacher named Hem Chandra Bhandari sending me to the principal’s office to get beating. The beatings also ensured that I hated the teachers and they hated me back.

Maybe I was used as a distraction for the teachers to keep their minds off the fact that they were being paid peanuts in comparison to the school owner and other high ranking staffs despite them putting in all the hard work. The discourse also made sure that even the students deemed “bad” hated each other. Though I banded with other students from similar strata, there was always a sense of dislike and distrust among us. It was only during my senior year when being “bad” was popular.

However, everyone who started bad did not always go down as badly. There were few who turned out to be some of the best students. But then just like in capitalism, the school needed a few “rags to riches” stories to sustain its discourse. As bad as I was at GEMS, my roles changed as the institution changed. I went on to be everything from a bright student to a topper in new institutions with new discourse. Was GEMS as forbidding a school as it sounds? I think the school was no different from the rest. What I think is more important and certainly more interesting here is to understand how I was engineered to serve a particular purpose. For Foucault, every institution, be it a school or a government, functioning under a particular political-economic system follows what he calls “a discursive pattern”: a larger collective discourse that aspires to propagate and perpetuate the values and ideas of the ruling class.  Nearly 10 years after graduating from the school, I have begun to realize that my case is all but an example that showcases how the system creates its own villains to glorify its own heroes for making its subjects internalize the discursive pattern of the bourgeois regime.

The author is a news editor, Radio Nepal

Omicron: A Concern for Unvaccinated Individuals
9 hours ago