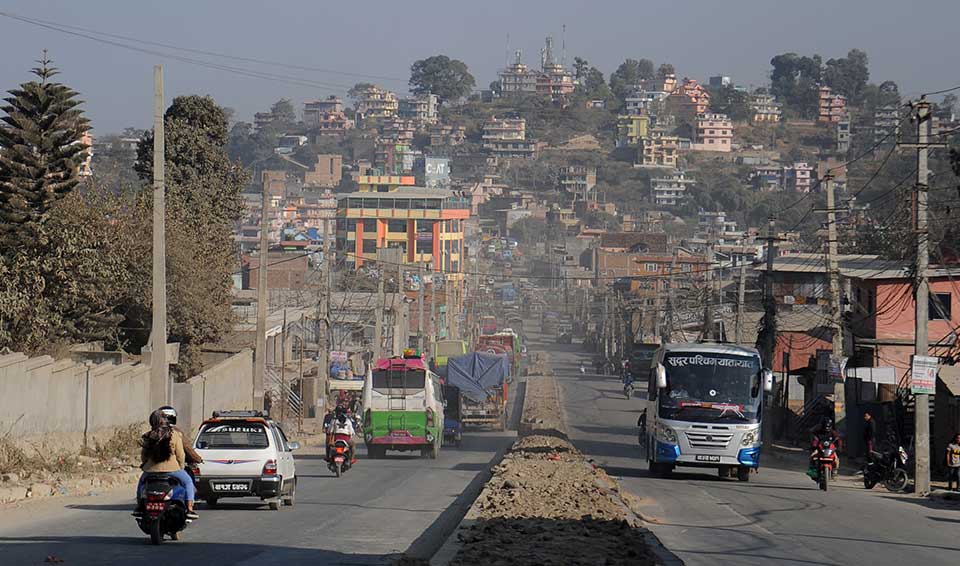 170 cases against road expansion pending at Supreme Court, hundreds in other courts across country

KATHMANDU, Dec 4: The ruling of a full bench of the Supreme Court a year ago concerning the Kalimati-Nagdungua road section has halted road widening work that has been going on in Kathmandu Valley for nearly a decade. Government officials state that the roads in Kathmandu and elsewhere will not be widened now. The ruling by justices Kedar Prasad Chalise, Hari Krishna Karki and Purushottam Bhandari simply requires the government to adhere to the Land Acquisition Act regarding compensation while acquiring private land. However, the full text of the ruling says the land owners concerned should agree to the compensation amount offered by the government. The SC ruling will impact infrastructure projects other than roads also.

“Paying compensation as per the SC ruling means the government will have to spend billions. They [land owners] ask for compensation rates that are artificially high. And that stalls the process of land acquisition,” said Bhaikaji Tiwari, chief commissioner of Kathmandu Valley Development Authority. “The ruling not only affects the ongoing and future road projects but compensation will have to be paid even for roads that were widened earlier. Compensation in Kathmandu alone will amount to more than a billion rupees.”

Several cases concerning land acquisition are pending in court. Twenty seven people including Ram Krishna Maharjan have filed cases against the Satdobato -Godawari road expansion project. Bhim Kumari Bartaula and two others have filed cases against the Hetauda-Pathlaiya road section. Twenty-eight others, including Harish Chandra Shrestha and Madhav Prasad Neupane, have sued for compensation for the same road section.

Similarly, 13 people including Dhana Joshi have moved the courts over the expansion of the Dhangadhi-Dadeldhura highway. Shambhu Chaudhari and 66 others have likewise gone to court against the Dharan- Chatara-Beltar-Gaighat road section. Purnamaya Tamang has brought suit against the Hile-Leguwaghat-Bhojpur section. Kapildev Yadav and 68 others are litigating against the six-lane Bara-Jitpur road.

The Jorpati-Sankhu road widening project is in trouble as Sanubabu Bishanke and 330 others have filed suit for compensation. Locals unhappy with the Satdobato-Chapagaun and Birgunj-Pathlaiya roads are also in the legal frays.

One hundred and seventy such cases have been filed at the Supreme Court alone. There is no dearth of road-related cases at district and high courts either. According to government engineers and lawyers, all these cases now attract the SC ruling which clearly favors plaintiffs over the government in matters regarding compensation for land.

Highway Act, 2021 BS had fixed the measurements of Tribhuvan Highway, which includes the Kalimati-Kalanki-Nagdhunga road section, at 22 meters on both sides from the central line. After a decade, the Road Act 2031 extended this to 25 meters. Infrastructures along the roadside were removed and the locals were distributed compensation. However, the government did not mark the boundary right then. Though many went along with what the government wanted and freed up their land upon receiving compensation, some remained rigid. Businesses carried on and the construction of buildings and other structures did not stop.

“The same owners are now obstructing the road expansion project. Even with the road being widened as per the earlier measurement, the locals are now asking for compensation and that too, as per the ‘current’ rates,” Tiwari claims. “And since the ruling has gone in their favor, it is not possible to bypass their demand. This precedent is sure to affect road widening projects across the country.”

The Supreme Court in 2010 had handed down a verdict in favor of road projects. When Krishna Kumari Shreshta of Nayabazar filed a case stating that her existing four-foot access way was obstructed by a road project, the court said, “If there is conflict between the law and development, the latter should be opted for unless a clear unfairness is involved.” The same year, the locals of Harisiddhi in Lalitpur filed a case against the installation of power lines. But the Supreme Court stood with the line extension project, stating that the development work was for the benefit of a larger group over the long haul.

Similarly, the Maitighar-Tinkune road widening also ran into obstructions. Dozens of locals sued for compensation. However, the court gave a green signal to the government, letting it go ahead with the project without paying any compensation. Land for the road widening had already been demarcated before 1978 but the issue of compensation arose after the law changed in favor of compensation. As per the same SC verdict, the government acquired some land near Everest Hotel belonging to former chief justices Bishwanath Upadhyay and Kedarnath Upadhyay and former justice Baijanath Upadhyay (who are brothers) without paying compensation. According to a government official, this was testimony to the importance of road expansion. In many other cases also, including Hetauda-Chitwan, Kalimati-Balkhu and the BP Highway, the Supreme Court stated that the plaintiffs need not be given compensation.

In Kathmandu alone, the road network has been expanded by around 400 kilometers and some roads have been widened by one to three meters in the last six years. If, on average, the cost of the land is set at Rs 2 million per ana [342.25 sq ft], the compensation comes to more than a billion rupees.

As a result of the SC ruling last year, the government has already halted road expansion in the Valley. It is now only blacktopping the ‘available area’. The Kalanki-Nagdhunga road section is being blacktopped by night, without the planned expansion. According to Bishwa Bijaya Lal Shrestha, an engineer and spokesperson for Kathmandu Valley Road Widening Project, it was simply not possible to compensate the locals as per the Supreme Court ruling.

Politics of compensation and power

While the government has long been criticized for the pathetic condition of the Kalimati-Nagdhunga road section, contractors plead that it is the SC ruling that has slowed down the work. According to former minister Surendra Pandey, the court ruling has been fatal for development. “This verdict is controversial and clearly against the state’s policy of infrastructure development,” he said.

“Instead of saying that compensation should be fixed as per the government or market rate, it says it should be as per the land owner’s demand. This means road extension projects are now entangled in a web from which there is no breaking free.”

According to infrastructure expert Surya Raj Acharya, the development of roads cannot be compared with other kinds of developments. Though it is the responsibility of the courts to protect the property of citizens, they should exercise sensitivity while ruling on such issues. “If you are deciding about roads, you should brainstorm the overall implications,” Acharya added.

Acharya, meanwhile, informed that a tax on the basis of the profit from land along the roads was provisioned back  in 1975. However, the relevant law was never implemented.

According to land expert Jagat Deuja, locals ‘ignore’ the decisions of the government and erect cottages and houses as they please because they feel confident that ‘they cannot be removed that easily’. “This happens also because once land is cleared for a road, the road work does not take place immediately. By the time the government gets moving, people would have lived there for years.”

Two rates are considered while compensating for infrastructure built within the border lines set by the government. If it is the government’s own project, the rate is minimum or non-existent and if it is funded by the ADB or the World Bank, the compensation shoots up. The government had bought a dumping site at Bancharedanda in Nuwakot for Rs 1.1 million rupees per ropani although its market rate was around Rs 11,000 at the time.”

Tulasi Prasad Sitaula, former secretary at the Ministry of Physical Infrastructure, states that the entire country has turned into ‘private plots’ because of one reason or the other. “This is a huge challenge for development.”

Before 1978, the government could take over private land without compensation and by just publishing a notice. But after 1978, the government started providing compensation. Right to property is enshrined as a fundamental right in the new constitution. Sitaula suggests that road construction, land acquisition and the opportunities this brings should be viewed holistically. “If the government takes over half the land the owner still makes a lot of money from the remaining half.”

But senior advocate Shambu Thapa, who has handled many land acquisition cases, says, “The government can take over private land, but compensation must be provided. The constitution guarantees this and that’s what the court has said in its ruling.”

(The story was prepared in collaboration with Center for Investigative Journalism, Nepal.) 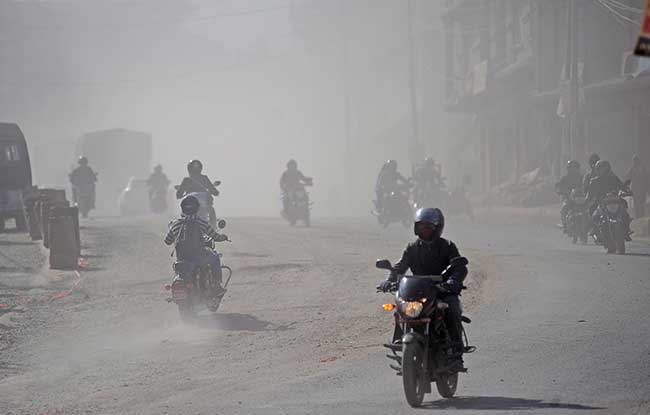 KATHMANDU, Sept 27: In a significant blow to the government, the Supreme Court on Wednesday issued the full text of a... Read More...