Holding on to the folk roots 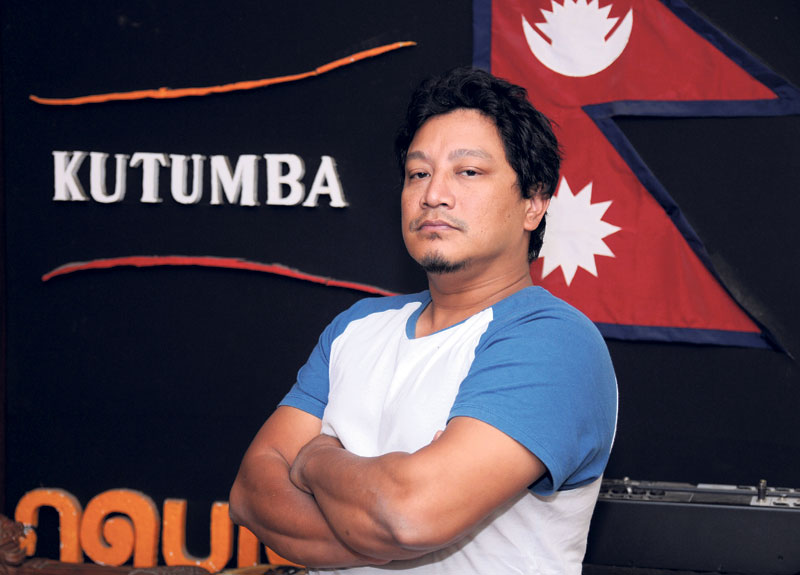 Music bands always tend to have fun anecdotes about their origin. In hindsight, it’s always amusing to hear how they unwittingly started a musical legacy and, the percussionist of Kutumba, Pavit Maharjan doesn’t disappoint either.

He fondly recalls the day how Nepal’s famous folk instrumental ensemble was basically a couple of friends who opened a “chiya khane office.”  In between drinking a lot of tea, they also occasionally held musical events. Maharjan says it was there that they desperately tried and failed to encourage other artists to play traditional Nepali music. So once again in between their tea breaks, Maharjan and his friends decided to pick up the instruments themselves.

Starting from 2004, Maharjan shares that it hasn’t been an easy road, however, the ensemble remains busy not only enthralling their local and international fans but also committing themselves to research, preservation and celebration of the diversity that exists in indigenous Nepali music. Priyanka Gurung caught up with Kutumba’s Maharjan to talk about their journey so far and of course, his playlist.

So after committing all this time and effort in the band, do you feel like you have explored all the facets of our traditional and folk music?
Where Nepali indigenous music is concerned, we know that we have only scratched the surface. We may have traveled from the likes of Panauti and Pokhara, all the way to Janakpur and Kailali, but it feels like we have only begun our research on the matter. Even though during our travels we made an effort to not just meet individuals and groups who were invested in carrying on playing Nepali instruments but actually sit down and learn from them, there is still a lot of ground to cover. Each ethnic group in our country has its own musical style and influences. It’s all so vast and rich. For instance, even though we are from Kathmandu, we haven’t even fully finished studying each facet of Newar music. I believe there will always be more things to explore. I doubt we will be done anytime soon.

Kutumba had also mentioned that one of their motives is to change the youths’ perspective of our traditional music. How is that going so far?
We have certainly come a long way. Back in the early 2000s, anybody playing Nepali instruments was regarded as un-cool. But now, there are significantly more people interested in authentic Nepali tunes and instruments. Not as much as it should be but at least, they don’t straight out call you a ‘pakhe.’ It’s natural for young people to want new things and just because it is traditional music doesn’t mean you can’t put your own flavor to it. It feels great to hear more people playing around and experimenting with traditional sounds and wanting to represent it. It makes us happy looking at youngsters who are involved in music at the moment.

Kutumba is still managed by its members. Why do you insist on this arrangement?
We decided on it because we sort of didn’t have a choice. Popular bands have a management team but with us, it’s easier to do these things ourselves. The fact is, as an instrumental band, it is still challenging for us to perform outside Kathmandu, in other parts of Nepal. It still takes time to convince people to invest their time and money in us. Many Nepalis still don’t understand the kind of band we are. Most aren’t used to our instrumental concept. And as it is, I believe it’s difficult to feel the full force of our music via television or audio, one must be there. It has to be live. So it is easier to rely on ourselves to manage these things.

Despite the challenges you have achieved many accolades, what do you think helped you along the way?
I think the most important step was the first one. To achieve success, it’s crucial to begin. I genuinely consider that to be the key of our success. We may have started with many uncertainties but eventually it did lead us somewhere.

So, what’s next for Kutumba?
We have been working on our own album. It’s almost complete. We might unveil it after a couple of months. In this upcoming project, we are bringing forth a fusion of Nepali and Celtic music. These may be sounds from two different continents but if we think about it, they both are music from the mountains. There is a connection there so we thought it would be interesting.

This American band has been on my playlist since my college days. It was a time when we were listening as well as playing plenty of punk and ska music. Sublime was probably the most popular in our circle. They didn’t have a heavy or a soft sound. Their music was quintessentially them and very different to what was on the scene at the moment.

I particularly enjoy listening to Yanni’s live collection. He is a composer, keyboardist, pianist, and music producer who blends jazz, classical, soft rock, and world music to create predominantly instrumental works. Many people who aren’t familiar with orchestra music might find it a little too complicated to enjoy but Yanni’s contemporary style has really helped break down those barriers.

Among the young generation of Nepali artists at the moment, Astha is one that I really enjoy listening to. She caught my attention right from the start. Even though she has amassed commercial success, her music isn’t just ‘pop.’ There is creativity and quality in her work as well. Further, Astha’s music appeals to different generations and that is a difficult task to achieve.

Almost two decades ago, a collection of individual artists got together to put the Nepali instrumental album, Heart Sutra and I believe this is still one of the best instrumental works released in our local music scene. It’s an album that I keep going back to again and again. I don’t think anybody who has heard it can resist buying it. It’s just that melodious and well put together.

It was after the release of the movie, Roja that I really got into his music. I started listening to his songs and researching his background as well. His roots are grounded in folk music as well and we can see that he has completely harnessed it in his music. Even though it is challenging to give a different flavor to folk roots, Rahman does it with such ease. His success serves as a great reference point.

KATHMANDU, April 7: At a time when talks are going on that the local-level election can be held in two... Read More...