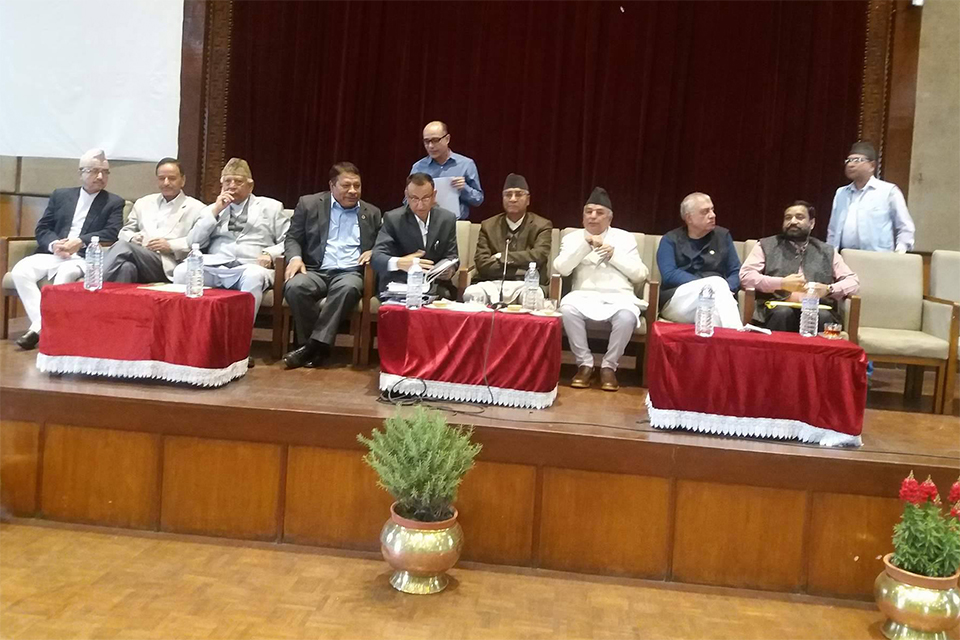 KATHMANDU, April 7: At a time when talks are going on that the local-level election can be held in two rounds to address the issues of Madhesh, the Nepali Congress (NC) insisted that it should be organized in a single phase.

Party central member and lawmaker Ramkrishna Yadav was of increasing the acceptability of the constitution through its amendment and thereby holding the election in a single phase.
Similarly, lawmaker Ramhari Khatiwada opined for moving forward the constitution amendment proposal remaining in the House to create an atmosphere conducive to hold the election convincing the Madhes-centric parties to join it.

The participants of the meeting urged the party leadership to sort disputes surfaced regarding the hierarchy of two deputy prime ministers. The issue has sent a negative message to the public, they added.

Party leader and Minister for Urban Development Arjun Narsingh stressed that an election manifesto should be built being based past election manifesto, documents endorsed by the part's latest general convention and local-level issues.

Leader Farmullah Mansoor said it was wrong not to move the constitution amendment proposal citing a lack of a two-third majority.

Coordinator of the party manifesto preparation committee Mahesh Acharya said the Nepali Congress, as the party that has led every political change in the country, should recall that role to resolve the Madhes problem. He added that the Congress was taking the initiatives to that end.
He also spoke of the need to make it clear to the people that the Nepali Congress has adopted the policy of inclusiveness, federalism, decentralisation and the constituent assembly since its inception.

Party president Sher Bahadur Deuba and senior leader Ram Chandra Poudel urged all the leaders and cadres of the party not to doubt on the holding of the election on the stipulated date. They also directed the party rank and file to wholeheartedly go for the elections.

Comments were also made in the meeting regarding the government's performance and the ministers representing the party in the government also came under criticism that works were not carried out as per the expectations of the people.

Party central committee members and lawmakers also questioned from where the rumours of the five-point proposal regarding addressing the Madhes demands came when the four-point amendment proposal is already registered in the parliament for the same purpose.

The party has decided to send all the suggestions that have come up in the meeting to the manifesto preparation committee and to forward the process for amendment proposal with maximum consensus in order to address the Tarai-Madhes demands.

Party Office secretary Dr Pradip Parajuli said that the party has collected the suggestions regarding the manifesto holding consultations with representatives of the sister, well-wishing and professional organizations before this.

The party has stated that the local needs and issues would be incorporated along with the suggestions from all, and a brief manifesto would be ready within the third week of this month. RSS

KATHMANDU, Dec 28: Nepali Congress, the largest party in parliament and the ruling coalition, has started efforts to fix the date... Read More...