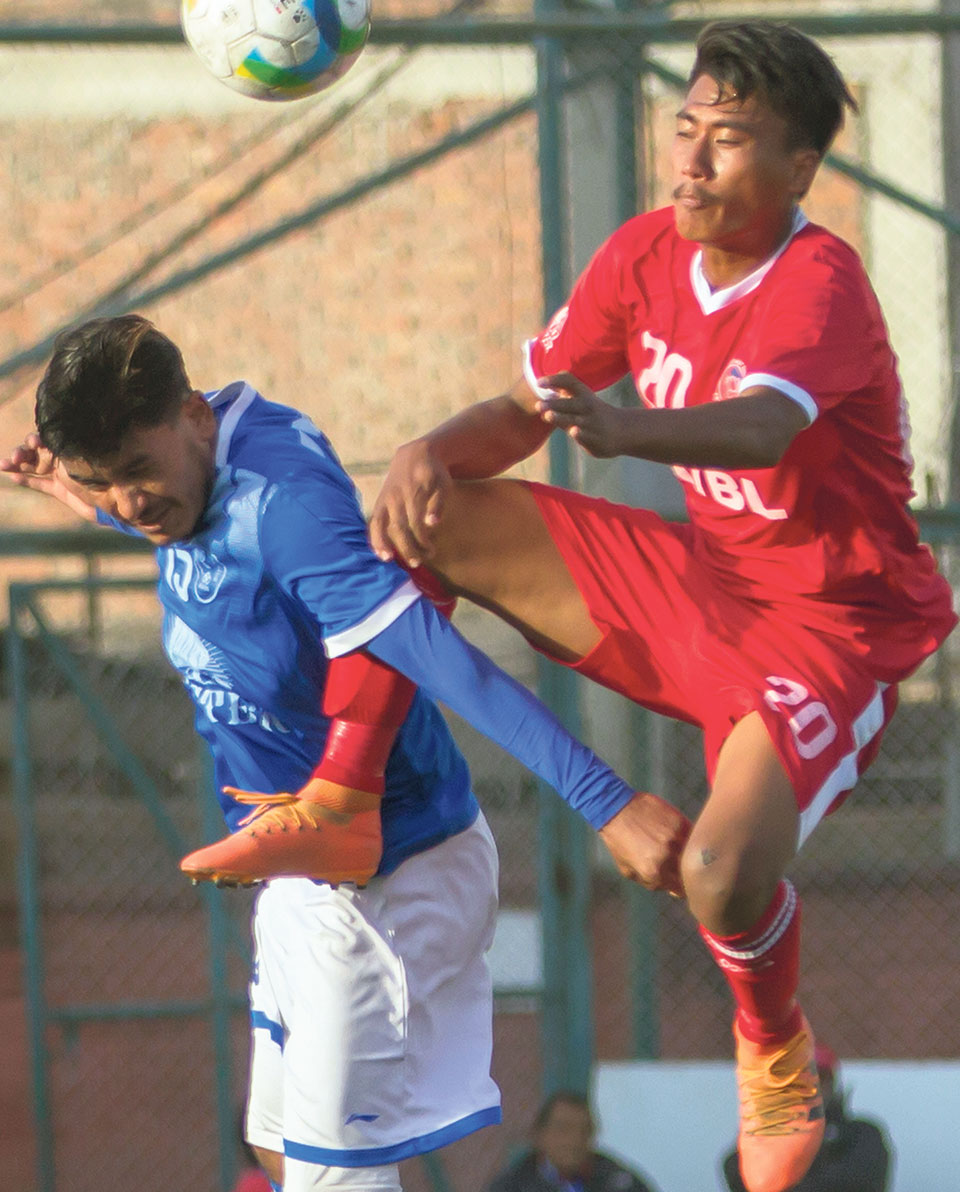 KATHMANDU, Nov 29: Himalaya Sherpa Club has registered its third win of the tournament defeating Machhindra Club 2-0 to climb up to the third place in the ongoing Martyr’s Memorial A-Division League in Lalitpur on Wednesday.

With the win, Himalaya Sherpa is still unbeaten after four rounds with 10 points winning three matches and with a draw.

At the All Nepal Football Association (ANFA) Complex in Satdobato, goals from Ashish Gurung and Karna Limbu sealed the win for Himalaya Sherpa, who has the best defensive record in the competition conceding only one goal so far.

Himalaya Sherpa took the lead in the game in the 21st minute through Gurung as he scored a header from a cross.

The team played well in the second half as well bettering its first half performance by creating some clinical chances in front of the goal. But, a relatively poor finishing from the forward line was the reason it could not score more in the game.

Himalaya Sherpa deployed a counter attacking tactics in most of its attacks, and the strategy was awarded with a goal from Limbu in the 89th minute to seal the win for the team.

Limbu’s shot from outside the box bounced in front of Machhindra keeper Dip Karki, who could not judge the flight of ball properly and went into the back of the net.

Machhindra is at the 11th place with two points coming from its two draws.

In the other game played on the same day, Friends Club needed a feel-good factor after three consecutive losses, and it registered a point in a six-goal thriller.

Jawalakhel Youth Club was in course for its first victory of the season, but a goal eight minutes from time from Friends secured a 3-3 draw seeing both the teams register their first point.

Friends had taken a lead through Bikash Lama who scored in the 26th minute after putting the ball in an empty post from a Fofona Brahiman cross. But, in the third minute of the first half injury time, Aruj Gurung leveled the game for Jawalakhel by scoring a header from a cross.

Jawalakhel then made a splendid comeback in the second half as Fode Fafana scored in the 47th minute. The team added its third goal in the 52nd minute through Suman Dangol.

Even though Friends looked in a disastrous form initially in the second half, the team settled itself and started creating chances. Brahiman scored a goal himself this time in the 68th minute to make the score 3-2 by chipping the ball from the penalty box.

Friends, which was in a dire need of a goal, prioritized its counter attacking strategy. Dhiraj Shrestha, who came in as a substitute, scored in the 82nd minute to equalize the game.

Jawalakhel players looked tired after that period and Friends kept on creating good chances, but was unable to convert them and shared a point.

Both the teams got other chances to score as well, but did not quite finish them. Jawalakhel’s Nir Bahadur Ale took the ball away from Friends defender Saroj Yonjan Lama in the fifth minute, but could not score. Friends’ Sanjok Maharjan threaded through ball to Prizen Tamang, but he was flagged offside in the 11th minute.

Friends head coach Ramesh Maharjan said that his team had to share a point with Jawalakhel as it lacked patience and control.

“Despite taking early lead in the game, the players could not maintain a balanced performance. The lack of coordination between the players was clearly seen,’’ Maharjan said. “We fielded new players after facing consecutive defeats. The team was not balanced even though starting the game well. The performance of the new players was not satisfactory.’’

Likewise, Jawalakhel head coach Raj Kumar KC said that the team could not maintain its lead because of the lack of fitness of the players.

“Despite taking a two-goal lead, we had to share a point as my players could not mark the opposition players properly. My players gave more priority to their movement rather than taking hold of the ball,’’ KC said, “The team was not balanced in the regulation time. The fitness was the problem in the players. Though we couldn’t secure a win, I am satisfied with their overall performance.’’

Jawalakhel and Friends are in the 12th and 13th places respectively.

After the two games, all the fourth round matches have been completed. The defending champion Manang Marsyangdi Club is at the top of the table with 12 points, while Tribhuvan Army Club and Himalaya Sherpa are second and third with 10 points each. Three Star has dropped down to fourth with nine points.

The fifth round of the league will start from Friday. In the first match of the round, New Road Team will take on the departmental team Nepal Police Club, while Three Star will face the other departmental team Armed Police Force (APF) club later on the same day. Both the matches will be played at the ANFA Complex. 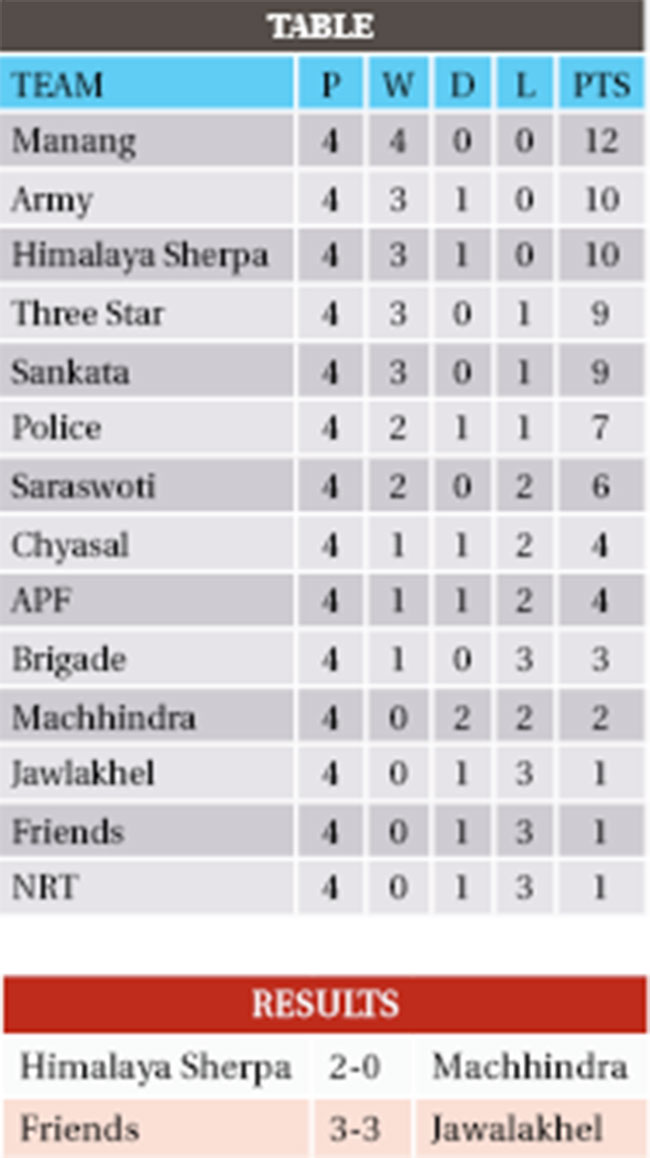 KATHMANDU, Nov 3: Bangladesh beat Pakistan 3-2 in a penalty shootout in the finals of the fourth edition of the... Read More...