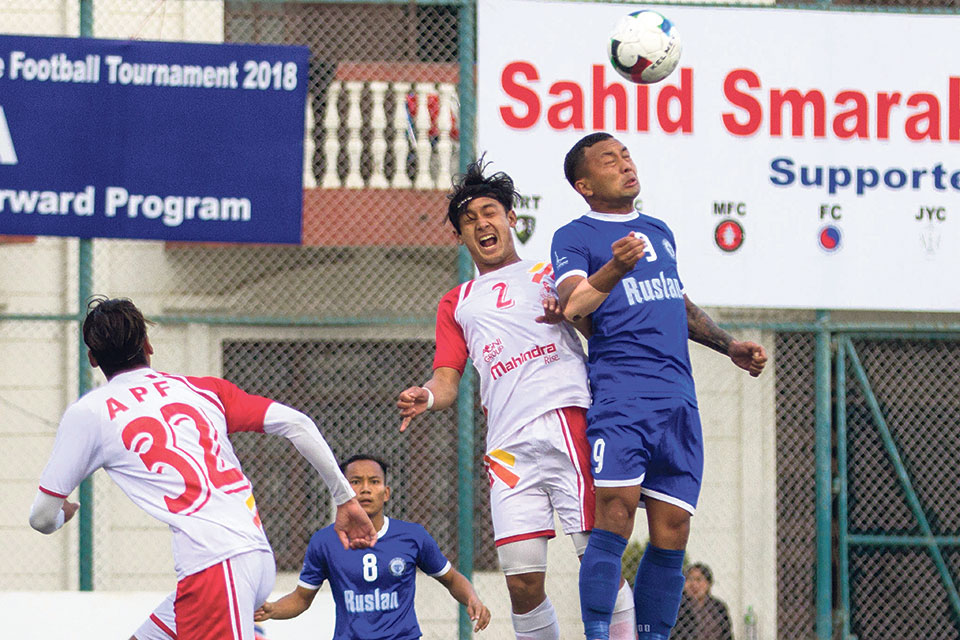 Manang Marshyangdi Club is in the second place in the table, but has a game still to play in the fifth round.

At the All Nepal Football Association (ANFA) Complex in Satdobato, goals either side of the half from Bista helped Three Star secure its fourth win in five games. The only game Three Star lost was to Manang in the third round of the league.

Three Star had taken the lead through Bista after a cross from Sunil Ball in the 26th minute, and the Three Star number nine scored a one touch goal. Earlier, Three Star got a chance to score in the 21st minute, but Budhha Limbu could not convert a cross from Anil Gurung.

APF got a couple of chances to score as well. Yuvraj Khadka took the ball away from Three Star defender Peter Segun in the 23rd minute, but Khadka’s shot was saved by keeper Alan Neupane. Also, Khadka gave a wonderful pass to Santosh Shrestha in the 41st minute, but he could not put the ball past Neupane again.

Three Star had a chance to double its lead in the injury time of the first half, but Limbu could not score in a one versus one against APF keeper Amrit Chaudhary.

Three Star that was a goal ahead at the start of the second period kept on pressurizing the departmental team and showcased a better balanced team frame. Then, retired national team striker Anil Gurung gave a pass to Bista, and he made no mistake to double his side’s lead in the 66th minute.

Three Star got other chances to score in the second half, but could not extend the lead. Bista headed in a ball resulting from a long throw in, but his shot was saved by keeper Chaudhary in the 48th minute. Three Star nearly scored a goal in the 61st minute when Sunil Bal hit a corner and Nirajan Khadka headed the ball in which looked like going inside the post, but APF’s Bishwas Udas made a goal-line clearance.

APF could not do any harm to Three Star struggling to get past the Three Star defense line and had to lose yet another game.

Three Star assistant coach Ashok Rai said that the tactics for the game was successful which saw his side get the win.

“I am satisfied with the performance from the team. The players performed well with the tactics we set. All the players played well implementing the roles they were given and that helped us get the win,’’ Rai said. “Even though we have new players in the team, we have prioritized the old set of players as we aimed at winning the title.’’

With the win, Three Star has accumulated a total of 12 points so far. APF has four points from five games and is at the ninth place.

In the other match played on the same day, the other departmental team Nepal Police Club has registered its third win of the season with a comfortable 3-0 victory over struggler New Road Team. Two goals from Nir Kumar Rai and a strike from Abhishek Rijal helped Police register a staggering win.  After the win, Police has climbed up the fourth place and has 10 points from five games so far.

Police took the lead through Rai in the 40th minute as Rai scored a header from a cross coming from the right side of the penalty box.

Police continued to outclass New Road in the second half as well and pressurized the winless team. Rijal utilized a cross from Ravi Paswan to score from the penalty box in the 66th minute. After scoring two goals, inspiring Police scored its third eight minutes from time as Rai scored from a Paswan pass.  Despite trying to get at least a goal, New Road could not create suitable chances to score.

New Road has accumulated only a point so far coming from its 2-2 draw with Tribhuvan Army Club in the first day of the league. New Road has lost all its remaining games since then.

Pakistan registers win against India in SAFF U-15 Championship