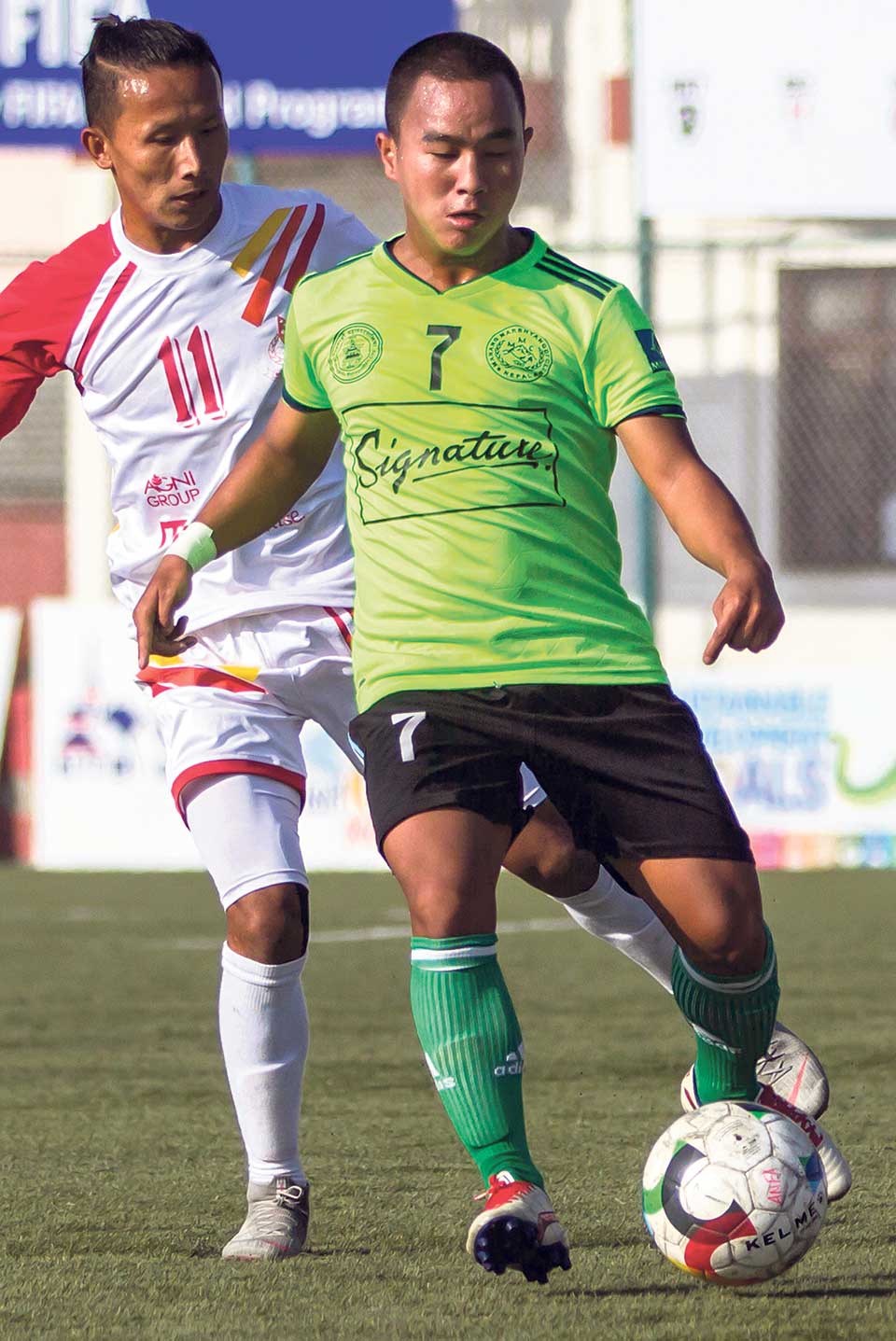 KATHMANDU, Nov 28: Manang Marshyangdi Club (MMC) has climbed up to the top of the table with the fourth straight win after defeating the departmental team Armed Police Force (APF) Club 2-1 in the ongoing Martyr’s Memorial A-Division League in Lalitpur on Tuesday. It narrowly got past APF to keep its winning streak intact being the only side in the competition to win all its games so far.

At the All Nepal Football Association (ANFA) Complex in Satdobato, goals from Adelaja Somide and Anjan Bista was enough for Manang to seal its fourth win and go two points ahead of second-placed departmental team Tribhuvan Army Club (TAC), which is the only other side that remained unbeaten after four games so far.TAC won three matches while one match was draw.

Meanwhile, APF who had got the chances in the counter attack after deploying a defensive strategy in the initial stage of the game. APF was awarded a penalty after Nabin Lama’s corner in the 27th minute was judged to have been controlled by hand by Manang’s defender Mohammed Asif. Lama scored from the spot to give APF an equalizer.

Even though both the teams showed a balanced performance, Manang was given a penalty in the last minute of the first half. A cross from Manang’s Kamal Shrestha saw Santosh Kumar Katuwal handling the ball with his hand. Bista scored from the spot to restore Manang’s lead.

Both the teams got other chances to score in the match, but couldn’t capitalize on them. Manang captain Biraj Maharjan hit a long free-kick in the eighth minute, but Bista’s header went out hitting the crossbar. APF’s Lama threaded a one touch ball to Yuvraj Khadka, but his shot went over the bar.

Manang, who took the lead near the end of the first half, was in pressure in the second period. APF could not equalize in the game again as Shyam Kumar Nepali’s beautiful pass to Rajan Gurung was not converted.

Despite being pressurized, Manang created several chances near the full time whistle, but could not convert them. Substitute Dona Thapa’s shot from outside the box in the injury time went just wide of the post.

APF has four points from four games. It’s the only win came against NIBL Friends Club.

Manang coach Suman Shrestha said that even though his side won, he was not satisfied with the overall performance.

APF head coach Rajendra Tamang said that the players could not perform well because of the lack of experience.

“Manang is a team full of good players and their strategy is good too. To counter that strategy, our players could not mark their players properly,’’ Tamang said. “We had set a strategy of playing defensive and hitting Manang on the break. We scored with the tactics too, but the coordination of the players did not work well after conceding again.’’

In the other game played on the same day, Saraswati Youth Club registered its second consecutive win after beating Brigade Boys Club 2-1. To win its second game, Saraswati’s Binod KC and Francis Onyeama scored, while Brigade got a goal from Kazeem Busari.

Saraswati had taken an early lead through KC in the third minute as he converted a cross from Dipesh Shrestha to put the ball into the back of the net from inside the danger area.

But, Brigade equalized instantly after four minutes through Busari as he utilized a cross from Anup Gurung.

Even though the game was tied 1-1 at the start of the second half, Saraswati played brilliantly with the same attacking spirit. The performance was awarded with a goal as Oneyeama scored a header after a cross in the 52nd minute.

Himalaya Sherpa will now take on Machhindra Club, while Jawalakhel Youth Club will face Friends Club on the last day of the fourth round on Wednesday. Both the games will be played at the ANFA Complex.