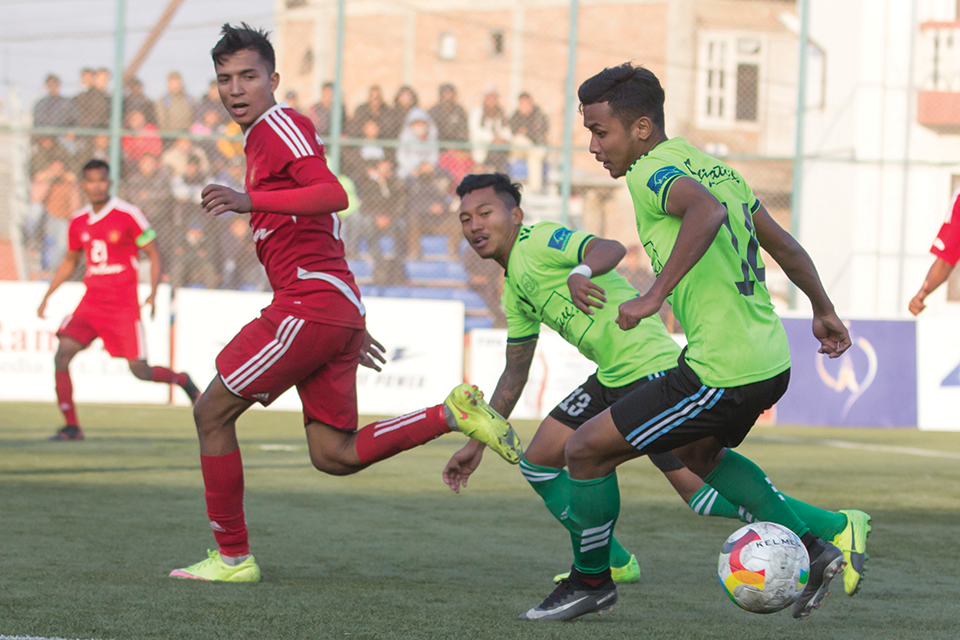 KATHMANDU, Dec 15: Title favorite Manang Marshyangdi Club has extended its three points advantage at the top of the table as it defeated the other title contender, the departmental team Tribhuvan Army Club 1-0 in the ongoing Martyr’s Memorial A-Division League in Lalitpur on Friday.

At the All Nepal Football Association (ANFA) Complex in Satdobato, the only goal in the game came from Bishal Rai who scored in the 31st minute to propel Army to its first loss of the season. He utilized a pass from Adelaja Somide to give Manang the lead.

Manang, who has the best defensive record of the tournament, extended its winning run to eight games in which it has kept five clean sheets. It has only conceded against Brigade Boys Club, Three Star Club and the other departmental team Armed Police Force (APF) Club. This is Manang’s fourth clean-sheet in a row.

Army, who was under pressure in the first half, managed to present a balanced performance in the second period looking for an equalizer. But, the chances the departmental team created were saved by Army keeper Bishal Shrestha with the help of a strong defensive line led by Indian recruit Mohamed Asif, who was adjudged the man of the match.

Army got a couple of chances in the first half injury time as Tanka Basnet gave a pass to Jitendra Karki inside the penalty box, but he could not find the net. Army nearly scored as George Prince Karki’s free-kick made Shrestha to struggle to save the ball in the 45th minute.

Afeez Olawale got a chance to score for Manang in the 43rd minute, but Army keeper Bikesh Kuthu saved the one vs one attempt.

Manang had to struggle to maintain its lead in the second half as Army prioritized one after another counter attack. Army had a chance again as captain Bharat Khawas gave a headed pass to Nawayug Shrestha, but his poor shot was easily saved by Shrestha in the 47th minute. Army’s Karki hit a shot from outside the box in the 53rd minute went just over the bar.

Manang prioritized defensive tactics with counter attacks too, and eventually got an opportunity as Kamal Shrestha crossed a ball to Somide, who controlled the ball, but his shot was terrifically saved by Kuthu in the 60th minute. Victor Kahmuka hit a shot from inside the box, but his shot hit the cross bar and Manang was unable to extend its lead.

The game proved out to be quite an affair for Manang, as it has already defeated two top horses in the league so far.

Manang coach Suman Shrestha said that all his players played according ti the tactics against a strong side.

“The new foreign players played well in the game. We had come to the match to win it, and we did just that,’’ Shrestha said. “All the players worked hard for the win against a strong side.’’

Shrestha added that the decision making of the referee throughout the game was not satisfactory.

“In the game Manang has taken the lead, the referee has been adding unnecessary additional times. Our official has been focusing on the time added, but always more time is added. Not just in this game, more time has been added in our other games as well,” Shrestha complained. “It can be seen that the referees favor senior players and give decisions towards them. It is an important thing to be solid in decision making.”

Army head coach Nabin Neupane said that the injuries and suspensions of his players have hindered the team in winning matches.

“We fielded the team to win as to present ourselves as the contenders. Manang was successful in converting their chances, but we could not convert any of the chances we created,” Neupane said. “The goal to win the title is still there, but we have to be dependent in other teams’ matches. And, we also need to get win to reach that target.”

In the other match played earlier on the same day, the other departmental team Nepal Police Club thrashed Friends Club 5-0 to register its fourth win of the season.

Police took the lead through Abhishek Rijal in the fourth minute, while Ravi Paswan extended its lead in the 31st minute.

Police finished the first half 2-0, and continued to build that momentum and scored three other goals. Bharat Shah scored Police’s lead in the 59th minute, while Tej Tamang scored the fourth goal three minutes after that. And, Nir Kumar Rai rounded off a fine Police victory scoring two minutes from time.

This is the biggest win in the league season so far. Earlier, Three Star and Army held the record of the biggest win as they beat Brigade Boys Club and Sankata Club 5-1 respectively.

With the win, Police has climbed up to the fifth position registering 14 points from eight matches, while Friends is 11th with five. 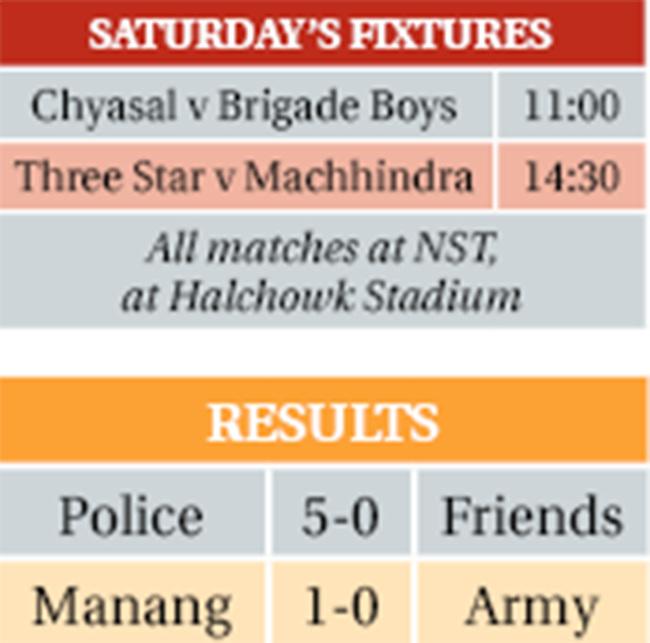