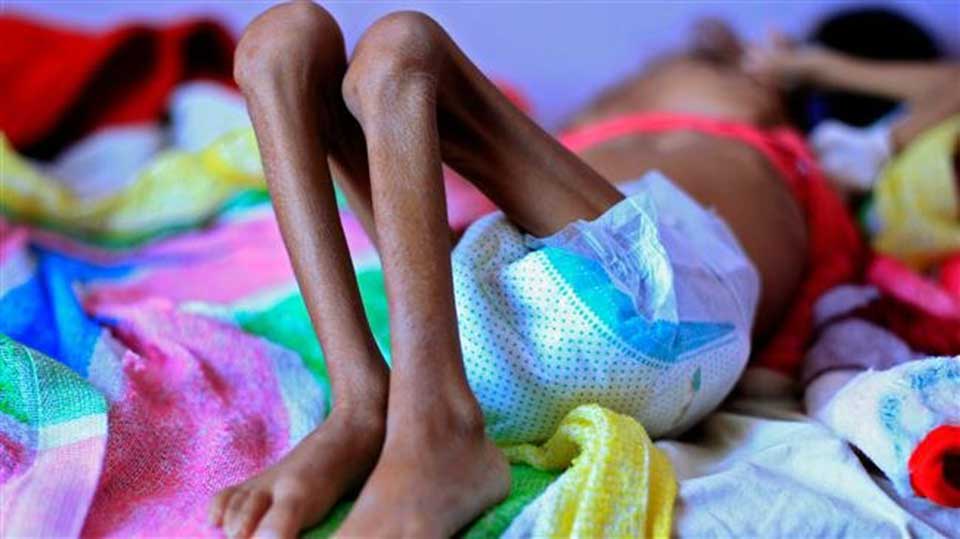 In this photo taken on October 06, 2018, a Yemeni child suffering from malnutrition lies on a bed at a treatment center in a hospital in the capital Sana'a . | Photo: AFP

SAANA, Nov 8: Thirty-five Yemeni and international NGOs on Wednesday called for an immediate cessation of hostilities in Yemen, where they warned the Saudi-led coalition’s war has put 14 million people on the brink of famine.

“With 14 million men, women and children on the brink of famine – half of the country’s population – there has never been a more urgent time to act,” the NGOs said in a statement.

The statement also called on the world to “secure an immediate cessation of hostilities” and “suspend the supply of arms at risk of being used in Yemen”.

“We call on governments to redouble their efforts to guarantee unimpeded access to essential items… including through the lifeline port of Hudaydah, where civilians have been caught in renewed fighting over the past few days.”

The humanitarian crisis in Yemen is manmade and a direct consequence of the severe restrictions on access to food, fuel, medical imports and humanitarian aid, it added.

The appeal was signed by Oxfam, Action Against Hunger, Doctors of the World, the International Federation for Human Rights, CARE International, and Yemeni organizations.

Saudi Arabia has been incessantly pounding Yemen since March 2015 in an attempt to crush the popular Houthi movement and reinstate former president Abd Rabbuh Mansur Hadi, a staunch ally of the Riyadh regime.

One of the principle targets of the Saudi strikes is Hudaydah port, where the World Food Programme is finding it hard or impossible to access desperately-needed wheat stocks. Yemen is heavily dependent on food imports and the deadly ground and aerial attacks by the Riyadh regime and its allies are directly adding to the risk of starvation on a massive scale.

According to a new report by the Armed Conflict Location and Event Data Project (ACLED), a nonprofit conflict-research organization, the Saudi-led war has so far claimed the lives of around 56,000 Yemenis.

Collective efforts can make Nepal a prosperous country in South Asia by next decade: Gyanendra Bahadur Karki
23 hours ago