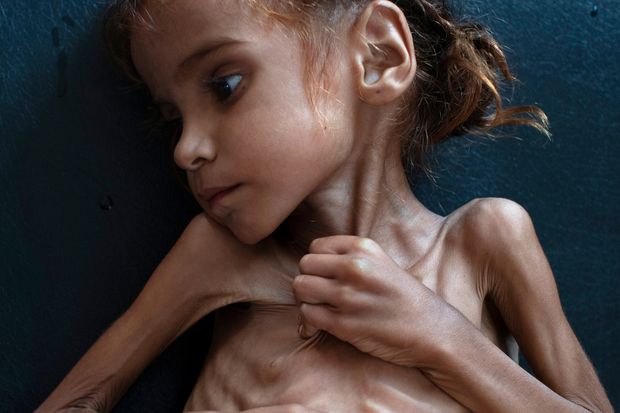 Amal Hussain, who became a symbol of her country's humanitarian crisis has died in a refugee camp. Photo Courtesy: Agencies

A seven-year-old girl whose photograph was featured by the New York Times last week has become one of the latest casualties of the devastating war in Yemen, the newspaper reported Thursday.

Amal Hussain, who became a symbol of her country's humanitarian crisis after being photographed by Tyler Hicks, died in a Yemeni refugee camp on Thursday, her family told the Times.

"My heart is broken," Mariam Ali, the girl's mother, was quoted as saying. "Amal was always smiling. Now I'm worried for my other children."

Speaking to The Takeaway radio program earlier this week, Pulitzer Prize-winner Hicks described how photographing Amal was "difficult" and "heartbreaking" but also "important."

"She really sums up how tragic and how bad the malnutrition and the starvation have really become in Yemen," the photographer said.

Yemen, one of the Arab world's poorest countries, has been embroiled in a devastating power struggle between the Saudi-backed government and the Iran-backed Houthi rebels for almost four years, with devastating consequences for civilians.

Last week, UN humanitarian chief Mark Lowcock told the UN Security Council that the war-torn country is in danger of being engulfed by an "imminent and great big famine" that could affect 14 million people, or around half of the population.

Lowcock said that the looming famine could be "bigger than anything any professional in this field has encountered during their working lives."

"Lack of food, displacement, poor nutrition, disease outbreaks and eroding healthcare" have also affected 1.1 million malnourished and lactating women, and if the situation continues to deteriorate, up to 2 million mothers may be "increasingly at risk of death," the UN Population Fund reported Thursday.

Over 7 million children face food insecurity in Yemen and ending the country's war will not save all of them, the UN children's agency said.

On October 23, the UN said around 14 million people — half the population — in Yemen are facing "pre-famine conditions".

When asked by AFP how many of these people are children, Cappelaere told AFP late on Wednesday "more than half".

UNICEF later clarified that over 7 million children face food insecurity, rather than the immediate threat of famine.

"In the last couple of years, we see the number of severely acute malnourished children stabilising", Cappelaere said.

But “ending the war is not enough”, he added, referring to a more than three year conflict that pits the government supported by a Saudi-led military coalition against Houthi rebels.

"What we need is to stop the war and [to create] a government mechanism that puts at the centre the people and children.

"The war is exacerbating the situation that was already bad before because of years of underdevelopment" in the Arab world's poorest nation, Cappelaere, said.

He welcomed a call by the UN on Wednesday to relaunch peace talks within a month.

He said efforts to come up with a solution in the next 30 days were "critical" to improving aid distribution and saving lives.

Cappelaere said that over 6,000 children have either been killed or sustained serious injuries since 2015.

"These are the numbers we have been able to verify, but we can safely assume that the number is higher, much higher," he said.

Saudi Arabia and its allies entered the war to bolster Yemeni President Abed Rabbo Mansour Hadi after the Iran-backed rebels took over the capital Sanaa.

Since 2015, more than 10,000 people have been killed and some 22 million — three quarters of the population — are in need of food aid, according to the UN.

More than 5 million children are at risk of famine in war-torn Yemen, according to charity Save the Children. Renewed... Read More...