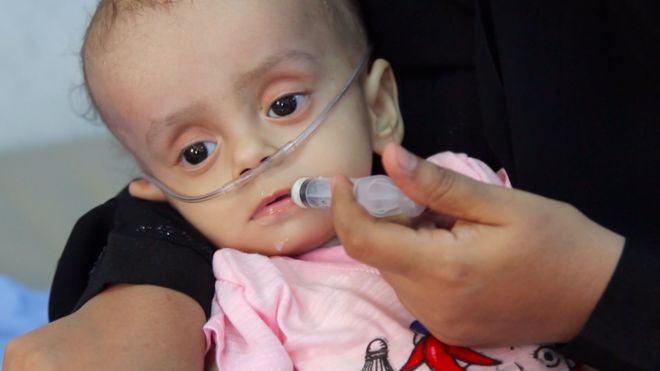 Disruption to supplies coming through Hodeida could "cause starvation on an unprecedented scale," UK-based NGO Save the Children has said in a new report.

Renewed attacks on the Red Sea city by the Saudi-led coalition could temporarily shut down the key port, putting 5.2 million children at risk of famine as food and fuel prices soar.

"Even the smallest disruption to food, fuel and aid supplies through its vital port could mean death for hundreds of thousands of malnourished children unable to get the food they need to stay alive," said Yemen representative Tamer Kirolos on Wednesday.

Around 80 percent of food, fuel and humanitarian aid enters the impoverished country through Hodeida, which has been under control of Houthi rebels since 2014.

The Yemeni army, pro-government militias and the Saudi and Emirati-led coalition relaunched a bid to retake Hodeida earlier this month after nearly two months of UN mediated peace talks collapsed.

The UN has warned an assault on the city of 600,000 people could impact food distribution to 8 million people dependent on humanitarian aid for survival.

'Babies too weak to cry'

"Millions of children don't know when or if their next meal will come," said Helle Thorning-Schmidt, CEO of Save the Children International. "In one hospital I visited in north Yemen, the babies were too weak to cry, their bodies exhausted by hunger.

"This war risks killing an entire generation of Yemen's children who face multiple threats, from bombs to hunger to preventable diseases like cholera," she added.

Nearly 10,000 people have been killed by the Yemen conflict and 3 million have been displaced. Thousands more have died from malnutrition and disease.

Houthi rebels overran parts of the north and took control of the capital, Saana, in 2014.

They have imposed a partial blockade of Hodeida to thwart what they say are Iranian arms shipments to the Houthis, charges the Houthis and Iran have denied.

Western governments have come under criticism for selling weapons to Saudi Arabia and the United Arab Emirates.

The United States provides intelligence and air refueling to Saudi jets, which have been accused of repeatedly bombing civilian targets.

British charity Save the Children has warned that more than five million children are at risk of starvation in Yemen,... Read More...