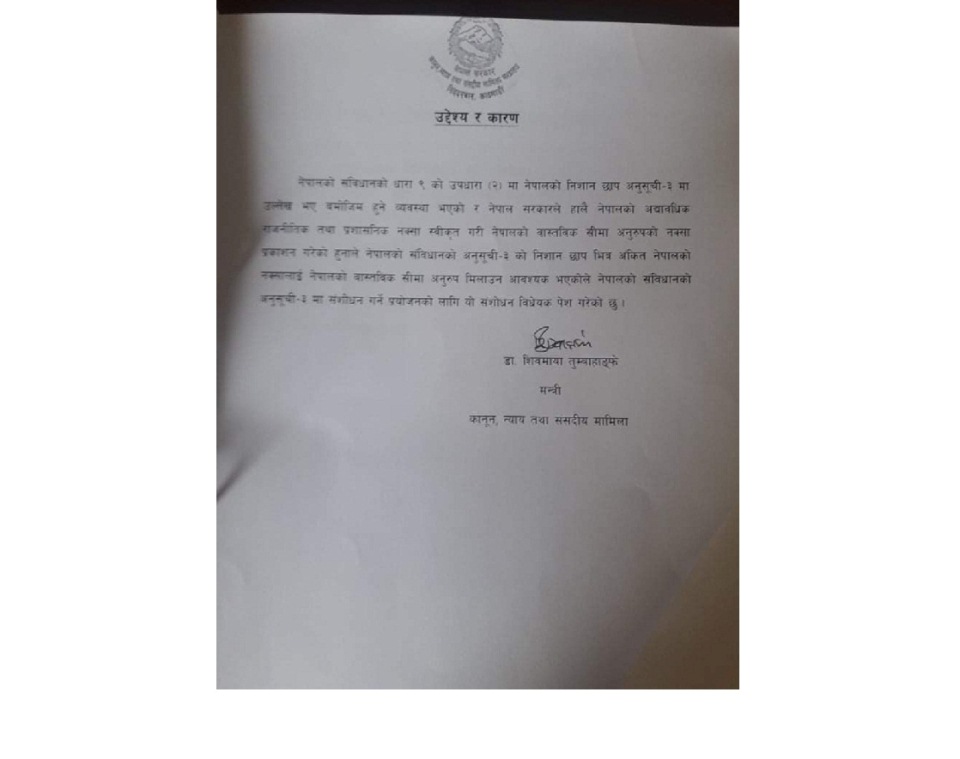 KATHMANDU, May 22: The government on Friday registered a bill at the Parliament Secretariat so as to amend the country’s constitution to replace Nepal's old map in the national emblem with the country’s new political and administrative map released recently.

Minister for Law Justice and Parliamentary Affairs, Shivamaya Tumbahangphe registered the bill as per a cabinet decision earlier today. A meeting of the Council of Ministers decided to amend the Constitution of Nepal in order to update Nepal's map in the national emblem.

Spokesperson for the government, Yubaraj Khatiwada, said that the meeting held at the Prime Minister's Official Residence in Baluwatar took a decision to this effect. The meeting decided to forward a constitution amendment bill to parliament for the same, according to him.

"The amendment bill will seek to amend Schedule 3 of the constitution to revise Nepal's map in the national emblem in line with the new political and administrative map of the country," Khatiwada told reporters this afternoon after the cabinet meeting. It requires a two-thirds majority of parliament to amend the constitution.

The next meeting of parliament has been scheduled for May 26.

On Wednesday this week, the government released the revised political and administrative map of Nepal that incorporates Limpiyadhura, Lipu Lekh and Kalapani, the territories encroached upon by India.

With the inclusion of Limpiyadhura, Lipu Lekh and Kalapani in the country’s new map, 335 sq km of land has been added to Nepal’s total area. Nepal has now an area of 147,516 sq km. According to the earlier version of Nepal’s map, officially issued in 2032 BS, it covered an area of 147,181 sq km. The new map incorporated the villages including Gunji, Nabhi and Kuti lying in Limpiyadhura, Lipulekh and Kalapani.

According to the Ministry of Land Management, the new map has been prepared primarily based on the Sugauli Treaty reached between Nepal and the then East India Company on March 4, 1816. The treaty states that the territory lying to the east of the Kali [Mahakali] River is an integral part of Nepal. However, the older Nepali map did not incorporate Gunji, Nabhi and Kuti villages although they are to the east of the Mahakali River.

According to the Survey Department, the newly-issued map covers Nepal’s  all 753 local units.

KATHMANDU, May 20: In its first official reaction to the move of Nepal to introduce new political map that includes... Read More...

KATHMANDU, May 19: Prime Minister KP Oli has said that China has clarified that its agreement with India to open... Read More...