Give job, more than law 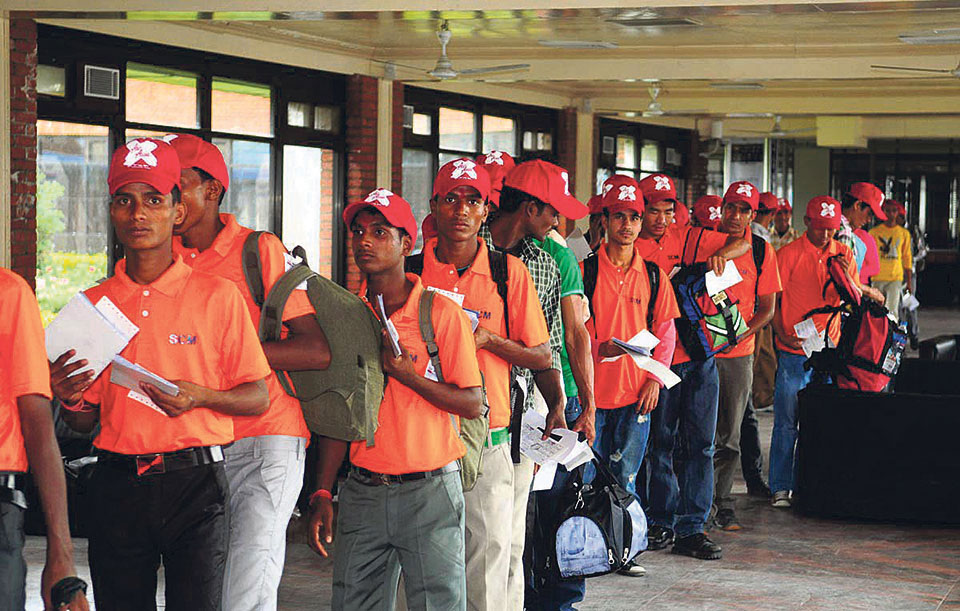 In this file photo, Malaysia-bound youths wait to board their flight at Tribhuvan International Airport. Photo: Republica

We need laws to guarantee youth employment. But if such laws cannot deal with employment needs they become useless

“A man willing to work, and unable to find a work, is perhaps the saddest sight that fortune’s inequality exhibits under this sun,” says Thomas Carlyle, a British historian and novelist.

Workers play a crucial role in the country’s development. Thus it is essential that their welfare is promoted and protected through a fair, just and suitable labour administration system.  A vibrant democracy should create employment opportunities, including self-employment.

Employment is the most essential right for a person to lead a dignified and comfortable  life as jobs bring money, allow  people to experience new ideas, build self-esteem and increase trust among themselves. This is why countries ensure employment to their citizens by enacting laws.

The preamble of the Act states that employment will be ensured to every citizen. But there are some provisions which have potential to frustrate the objective the legislation intends to achieve. Let me discuss some of them here.

Shortcomings of law
Section 11(2) of the Act empowers the Employment Service Centre (ESC), which is to be established by the Government of Nepal to prepare a list of ‘actual’ unemployed persons from the list of total applicants. This is fraught with challenges because even the employed persons might project themselves as ‘unemployed’ while making application at ESC.

The Act does not provide any clear provision outlining the basis on which the list of actual unemployed persons will be prepared. It could be used and misused by the party in power to limit the job opportunities only to their cadres. Likewise, the Act is silent on for how long and when the applicants will get the job.

There is nothing to stabilize and stop outflow of migrant workers. Remittances are the foundation of Nepal’s economy, constituting about one-third of the GDP, sustaining the national economy as well adding to household incomes. For a nation whose national economy depends highly on remittance, the employment laws should have the provisions whereby the state will be obliged to create job opportunities and business environment within the country. Foreign employment is not a permanent solution to Nepal’s unemployment problem.

Indeed, we need laws to guarantee youth employment. But if such laws cannot deal with employment needs they become useless.

Create jobs
Despite these legal arrangements, youth unemployment and outflow of migrant workers is perennial problem for India. So is the case with Nepal. Owing to lack of employment prospects, the youths today either live with apprehension of unemployability or they leave the country to find jobs overseas.

Troublingly, our education system has created an army of unemployable graduates. If the educational institutions impart skill-based learning they would help bring a positive change in the society. Job creation is the only solution to unemployment problems facing the country. Mere enactment of laws won’t help.

There seems to be a huge gap between what the industry is looking for and what the colleges and universities... Read More...

MAKAWANPUR, Oct 11: Chief Minister of Province 3, Dormani Paudel, on Wednesday stressed on the importance of tourism sector for the... Read More...

No one can become PM by making noise: Dr Koirala
12 hours ago