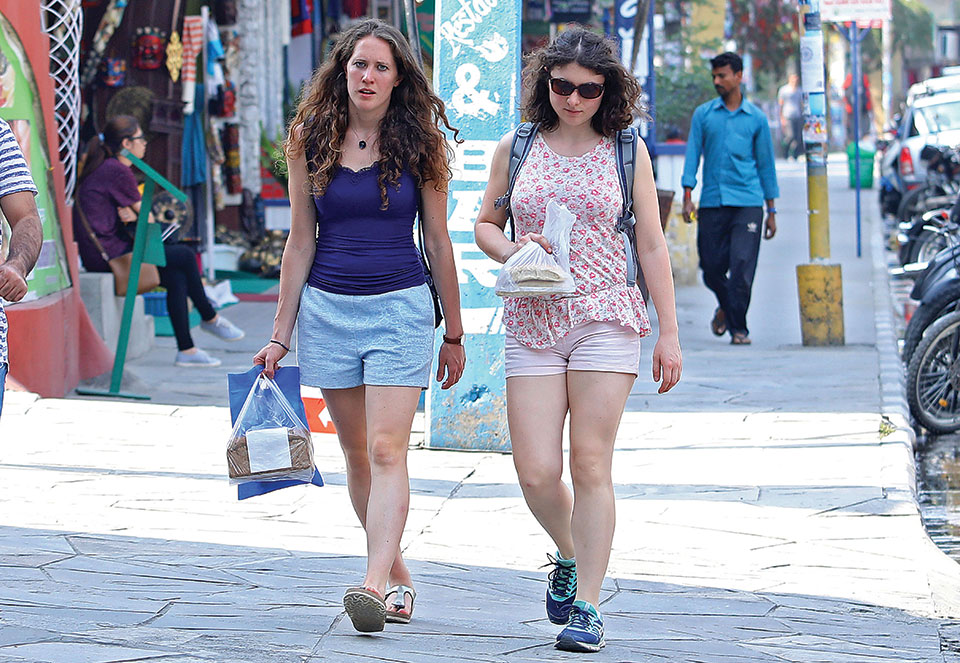 POKHARA, July 7: The Gandaki provincial government has said that it would start preparation for maintaining database of foreign tourists visiting Pokhara city.

Local authorities have been saying that around 40 percent of total tourists visiting Nepal travel to Pokhara. But this is just a conservative estimate. There is no mechanism so far to calculate number of tourists visiting Pokhara.

Until 2010, Pokhara Tourist Office under the Ministry of Culture, Tourism and Civil Aviation used to estimate tourists arrivals figures in Pokhara. However, it has been discontinued now.

“Till now, we do not have exact data of foreign tourists coming to Pokhara,” Bikash Lamsal, the tourism minister of Gandaki Province, told Republica. “But now, we will keep record of every single tourist visiting Pokhara.”

According to Lamsal, the provincial government will start keeping records of tourists visiting Pokhara from the beginning of new Fiscal Year 2018/19 or July 17. “We will keep check posts at the airport and other entry points to collect data of tourist arrivals in the lake city,” he added.

A taskforce formed under Juddha Gurung, former member secretary of National Trust for Nature Conservation, had recommended to the government to erect check posts in major entry points to collect details of tourists. Based on the recommendation of the taskforce, the provincial government is creating a mechanism to collect data of foreign tourists visiting Pokhara.

Along with Pokhara Airport, the provincial government plans to collect details of foreign tourists from Anbu Khaireni of Prithvi Highway, Ramdi of Siddhartha Highway, Manakamana Cable Car, Manaslu trekking trail, Baglung and other police stations based at trekking trails.

“We will use security personnel to collect data in the first six months of FY2018/19. Then our information centers will collect data,” Surya Thapaliya, chief of Pokhara Office of Nepal Tourism Board (NTB) said. “We will design a form and provide it to tourist vehicle operators. Motor vehicles carrying tourists will hand over such forms at our information centers,” Thapaliya said, adding: “Similar forms will be provided to public vehicles and they will be asked to fill up details of foreign tourists that they are ferrying.”

Nepal welcomed nearly one million foreign tourists in 2017. Based on assumption that 40 percent of the total arrivals travel to Pokhara, NTB Pokhara Office estimates that over 400,000 foreign tourists visited Pokhara in 2017.

“Many foreign tourists enter Pokhara via land route. But there is no record of such arrivals,” said Thapaliya. “Looking at the arrival of foreigners from third countries and neighboring countries, number of foreign tourists visiting Pokhara could be around 600,000 annually.”

Indian tourists do not need visa or any permission to visit Nepal. It is because of this fact that number of Indian tourists was never countries. “However, we will count every Indian tourist that enter Pokhara as per the new policy of the provincial government,” added Thapaliya.

Tourist arrivals to BNP up by 42 %

BARDIYA, Oct 23: The number of tourists visiting the Bardiya National Park (BNP) increased by 42 per cent and reached... Read More...