Four arrested for allegedly gang-raping a girl in Kailali

KATHMANDU, Aug 30: Police have arrested four people on the charge of gang-raping a girl in Kailali.  The four accused who allegedly raped a 17-year-old girl were arrested by the District Police Office, Kailali, on Sunday morning. 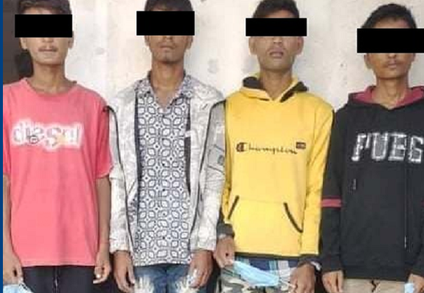 According to the police, the youths had gang-raped the girl on her way home when she was returning from her uncle's house at around 10 pm last Thursday. An official from the district police office informed Republica that first the girl was forcefully taken to a nearby field. She was then raped by the men who showed her the fears of “dangerous consequences” if she tried to escape.

The Area Police Office, Tikapur, had started searching for the absconding accused after the incident. "The girl’s friends reported the incident on Saturday morning. Police immediately started an investigation after the complaint was filed," said DSP Pratik Bista. "The four youths were trying to escape the village after the incident," he said. The girl's mother lives in India. She has been living with her father and her grandparents.

“The girl had not shared the incident until Friday evening. But after constant interrogation from her friends, she finally shared what had happened,” said Bista.

As per the details provided by the police, the four accused are Kumar Kadara, Deepak Kadara, Lokendra Rawat, and Shankar Bishwakarma of Kailali, Janaki Rural Municipality-9.

According to Bista, a case has been registered on the charge of gang-raping a girl against them.

KATHMANDU: Police have arrested three persons for their alleged involvement in gang raping a woman in a quarantine facility in... Read More...