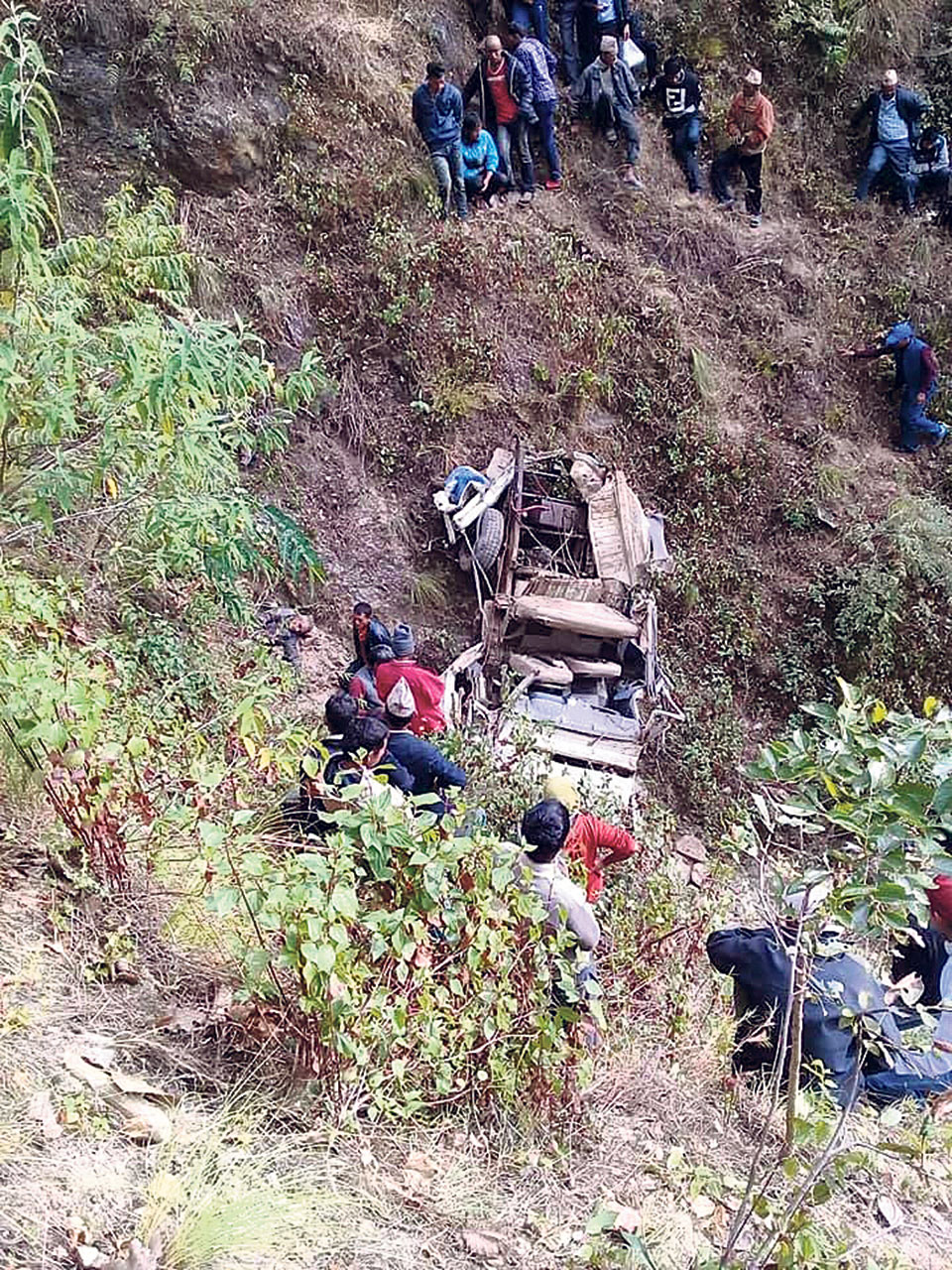 Rescuers and onlookers at the site of the jeep accident in Dailekh district on Wednesday morning. | Photo: Nagendra Upadhyaya/Republica

SURKHET, Nov 29: Five people were killed and three injured when a Mahindra Bolero jeep veered off the road and plunged 40 meters at a bend in Dangre along the Banke-Bahakot road in Dailekh district on Wednesday morning.

The jeep was headed for Bahakot from Surkhet. Altogether eight passengers were on board, according to police. The deceased have been identified as Rajendra Bahadur Shahi, 45, and Nirmal Bam, 30, of Thantikadh Rural Municipality ward no 1; Ramesh Shahi, 30, and Ratna Shahi, 46 of Thantikadh-2; and Dilip Shahi of Thantikadh-4.

While Rajendra and Nirmal died on the spot, others died while being rushed to Surkhet for treatment, according to the chief of the District Police Office, Dailekh DSP Thakur Pokharel.

“The bend is very narrow and it is not possible to take a turn without using the reverse gear,” said DSP Pokharel, adding, “It looks like the driver lost control of the vehicle while reversing.”

As the driver, Ramesh Shahi, was among the dead, it is difficult to know the exact cause of the accident, according to Pokharel. He died on the way to hospital. It had just been three years that the then VDC had opened Banki-Bahakot road.

“The road is too narrow and has multiple and difficult bends,” said local Bhakta Bahadur Shahi, adding,” Operating vehicles on the road is very challenging.”

Meanwhile, Shamsher Bam, 28, Juddha Suji, 30, and Mansara Raskoti, 28, all from Thantikadh-1 are critically injured. They are currently undergoing treatment in Nepalgunj.

GAINGHAT (Udayapur), Jan 7: Two persons were killed on the spot when a Bolero jeep plunged 300 meters below the... Read More...

Lack of capable leadership to drive the economy has posed a challenge to economy: FNCCI President Golchha
5 hours ago