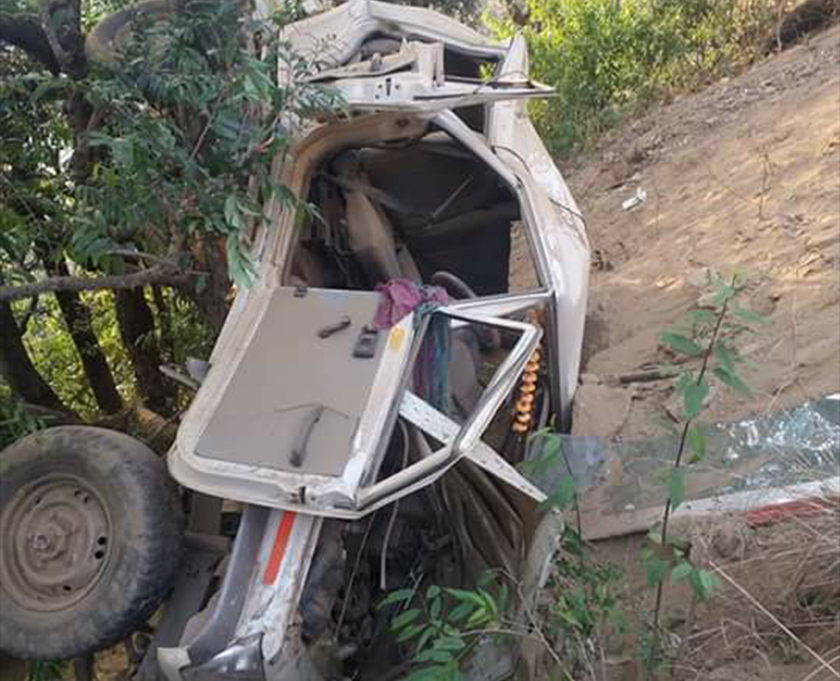 Wreckage of the jeep

DAILEKH, Feb 22: At least four people died and three others sustained severe injuries when a jeep (Lu 1 Ja 3532) plunged about 100 meters from the road in Bakhaldhunga of Mahabu Rural Municipality-4 of Dailekh district on Thursday evening.

The Mahindra Bolero jeep was en route to Gaidabaaj of the rural municipality when the driver lost control of the vehicle due to brake failure. All the four deceased died on the spot, informed Deputy Inspector of Police (DSP) Saroj Paudel, Chief of District Police Office (DPO), Dailekh.

The deceased have been identified as Nirmala Pandey, 22, from Mahabu Rural Municipality-4, Nirmala Shahi, 29, from the same ward, Shrawan Shahi, 35, of ward-5, and Tilak Dhakal of Surkhet, whose age and exact place of residence have not been ascertained yet, according to the DPO.

A team from Gaidabaj police post had carried out the rescue work. DSP Paudel had also reached the accident site. The injured are currently undergoing treatment at the district hospital in Dailekh.

A total of nine people including the driver were in the jeep at the time of the accident, according to Pratap Kumar Khatri, chief of District Traffic Police Office, Dailekh. The office informed that jeep driver Bakhat Thapa has been detained for investigation.

KATHMANDU, Feb 16: Four people were killed while 18 others sustained serious injuries in a jeep accident at Selfie Danda in... Read More...

Palpa, Feb 7: Four persons were killed and 19 others injured when a jeep plunged downhill from a steep trail... Read More...