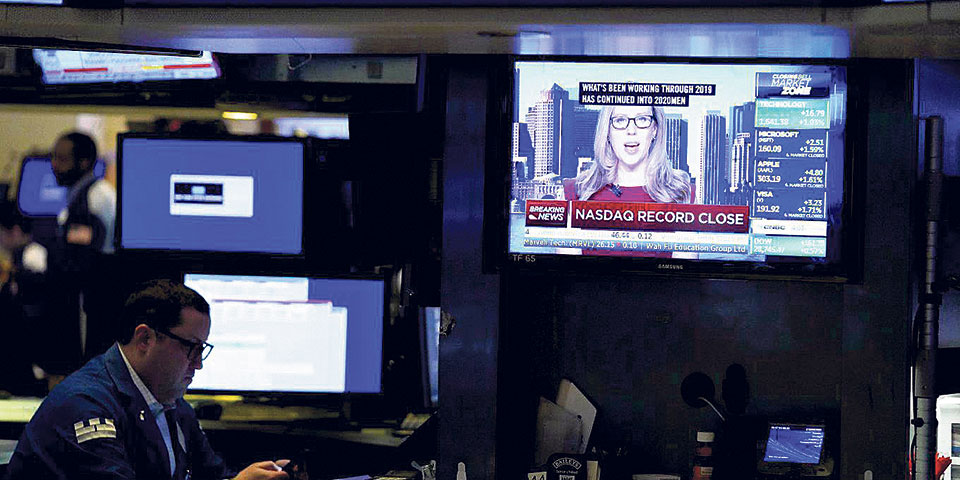 The assumption about what a conflict would mean for markets is mistaken. Even a modest price spike could trigger a recession

LONDON – Following the United States’ assassination of Iranian Quds Force commander Qassem Suleimani and Iran’s initial retaliation against two Iraqi bases housing US troops, financial markets moved into risk-off mode: oil prices spiked by 10 percent, US and global equities dropped by a few percentage points, and safe-haven bond yields fell. In short order, though, despite the continuing risks of a US-Iran conflict and the implications that it would have for markets, the view that both sides would eschew further escalation calmed investors and reversed these price movements, with equities even approaching new highs.

That turnabout reflects two assumptions. First, markets are banking on the fact that neither Iran nor the US wants a full-scale war, which would threaten both the Iranian regime and US President Donald Trump’s re-election prospects. Second, investors seem to believe that the economic impact of a conflict would be modest. After all, oil’s importance as an input in production and consumption has fallen sharply since past oil-shock episodes, such as the 1973 Yom Kippur War, Iran’s 1979 Islamic Revolution, and Iraq’s 1990 invasion of Kuwait. Moreover, the US itself is now a major energy producer, inflation expectations are much lower than in past decades, and there is little risk of central banks hiking interest rates following an oil-price shock.

Both assumptions are clearly flawed. Even if the risk of a full-scale war may seem low, there is no reason to believe that US-Iranian relations will return to the status quo ante. The idea that a zero-casualty strike on two Iraqi bases has satisfied Iran’s need to retaliate is simply naive. Those Iranian rockets were merely the first salvo in a response that will build up as November’s US presidential election approaches. The conflict will continue to feature aggression by regional proxies (including attacks against Israel), direct military confrontations that fall short of all-out war, efforts to sabotage Saudi and other Gulf oil facilities, impeded Gulf navigation, international terrorism, cyber attacks, nuclear proliferation, and more. Any of these could lead to an unintentional escalation of the conflict.

Moreover, the Iranian regime’s survival is more threatened by an internal revolution than by a full-scale war. Because an invasion of Iran is unlikely, the regime could survive a war (despite a very damaging aerial bombing campaign)—and even benefit as Iranians rally around the regime, as they briefly did in response to the killing of Suleimani. Conversely, a full-scale war and the ensuing spike in oil prices and global recession would lead to regime change in the US, which Iran badly desires. So Iran not only can afford to escalate, but it has all the incentives to do so, initially through proxies and asymmetric warfare, to avoid provoking an immediate US reaction.

The assumption about what a conflict would mean for markets is equally mistaken. Though the US is less dependent on foreign oil than in the past, even a modest price spike could trigger a broader downturn or recession, as happened in 1990. While an oil-price shock would boost US energy producers’ profits, the benefits would be outweighed by the costs to US oil consumers (both households and firms). Overall, US private spending and growth would slow, as would growth in all of the major net-oil-importing economies, including Japan, China, India, South Korea, Turkey, and most European countries. Finally, although central banks would not hike interest rates following an oil-price shock, nor do they have much space left to loosen monetary policies further.

According to an estimate by JPMorgan, a conflict that blocks the Strait of Hormuz for six months could drive up oil prices by 126 percent, to more than $150 per barrel, setting the stage for a severe global recession. And even a more limited disruption—such as a one-month blockade—could push the price up to $80 per barrel.

But even these estimates do not fully capture the role that oil prices play in the global economy. The price of oil can spike much more than a basic supply-demand model would suggest, because many oil-dependent sectors and countries will engage in precautionary stockpiling. The risk that Iran could attack oil production facilities or disrupt major shipping routes creates a “fear premium.” Hence, even a modest oil-price increase to $80 per barrel would lead to a sustained risk-off episode, with US and global equities falling by at least 10 percent, in turn, hurting investor, business, and consumer confidence.

It is worth remembering that global corporate capital spending was already severely dampened last year, owing to worries about an escalation in the US-China trade and technology war and the possibility of a “hard” Brexit. Just as these risks—that is, the “option value of waiting”—were receding, a new one has emerged. Leaving aside the direct negative impact of higher energy prices, fears of an escalating US-Iran conflict could lead to more precautionary household saving and lower capital spending by firms, further weakening demand and growth.

Moreover, even before that risk emerged, some analysts (including me) warned that growth this year might be as tepid as growth in 2019. Markets and investors had been looking forward to a period of easier monetary policies and an end to the tail risks associated with the trade war and Brexit. Many market watchers were hoping that the synchronized global slowdown of 2019 (when growth fell to three percent , compared to 3.8 percent in 2017) would end, with growth approaching 3.4 percent this year. But this outlook ignored many remaining fragilities.

Now, despite Wall Street’s optimism, even a mild resumption of US-Iran tensions could push global growth below the mediocre level of 2019. A more severe conflict that falls short of war could increase oil prices to well above $80 per barrel, possibly pushing equities into bear territory (a decrease of 20 percent) and leading to a global growth stall. Finally, a full-scale war could drive the price of oil above $150 per barrel, ushering in a severe global recession and a fall of over 30 percent for equities markets.

While the probability of a full-scale war remains low for now (no more than 20 percent, in my view), the chances of simply returning to the pre-assassination status quo are even lower (say, five percent). The most likely scenario is that the situation escalates into a new grey area (indirect conflict and direct clashes falling short of war) that would drive up the risk of a full-scale war. At that new baseline, the market’s current complacency will look not just naive, but utterly delusional. The risk of a growth stall or even a global recession is now much higher and rising.

Nouriel Roubini is Chairman of Roubini Macro Associates and Professor of Economics at New York University’s Stern School of Business. His website is NourielRoubini.com

STANFORD – The assassination by the United States of Qassem Suleimani, the commander of Iran’s Quds Force, was certainly a... Read More...

TEL AVIV – We no longer live in an era in which wars are officially declared. The US drone strike... Read More...

Trump says he is worried about terrorist attacks if U.S. troops leave Afghanistan

WASHINGTON, July 2: President Donald Trump said he wants to pull U.S. troops out of Afghanistan but is concerned that... Read More...

Soils under Threat
19 hours ago