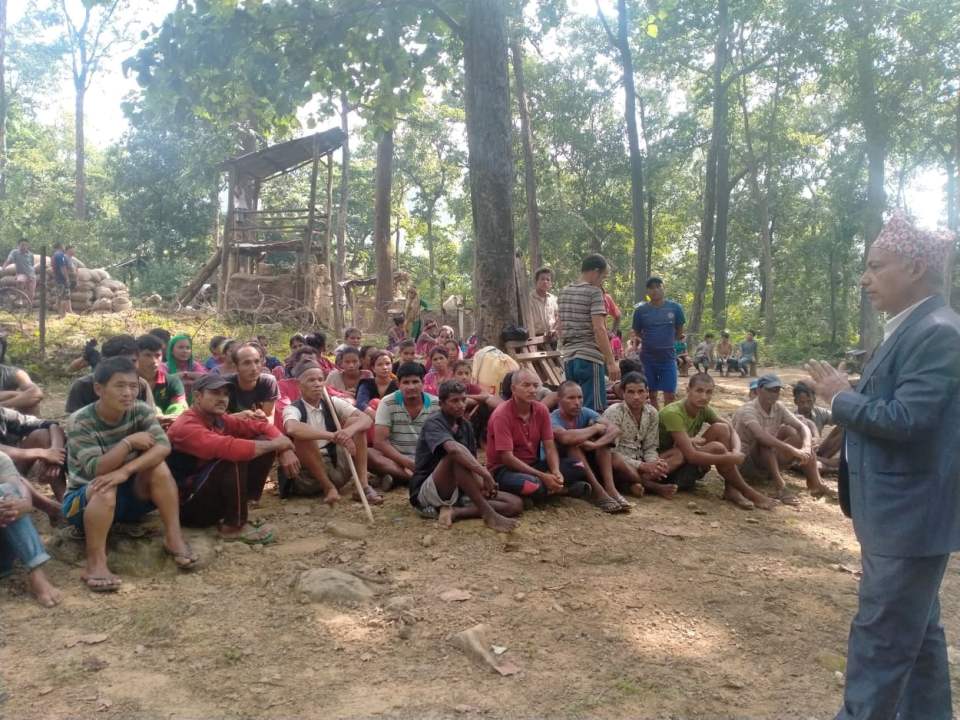 Farmers from Harkedanda being distributed potato seeds in this recent photo.

SURKHET, Oct 8: Top Bahadur Kadayat from a remote village of Surkhet saved over one million rupees this year by selling ginger, turmeric and potatoes. He attributes this success to the newly-constructed roads that have connected his village to the main markets in his home district and beyond.

Until a few years ago, his biggest dream was to find a job at ‘Kalapani’(i.e. Some remote places) across the border. And that would offer him barely a few thousands rupees a month. “Thanks to the roads, the fate of the people has changed here. I feel this will get even better in the days to come,” said Kadayat, expressing his optimism. “Until a few years ago, we used to think that our village will never see roads like this. I was also thinking of going to Kalapani for a job.”

Kadayat, a local of Telpani in Barahatal Rural Municipality, used to produce potato, turmeric and ginger in huge quantities even in the past. However, all these agricultural products would go into waste in the absence of transportation facilities.

Kadayat sold 55 quintal of potato and 120 quintal of ginger and turmeric this year alone. “Huge areas of land would remain barren while only a small portion of the land would be used to grow cereal crops, vegetables and herbs. But even those little amounts of agricultural products would not find buyers and we would be at a great loss,” Kadayat recalled.

A number of roads are under construction in Surkhet, while some of these construction projects have been already completed. A road to Telpani-- Kadayat’s home village -- was recently blacktopped. The prices of the lands alongside the road have also skyrocketed after the construction of the road.

“We can see a lot of changes here. The lands are now considered precious. Farmers are very happy that their products are no more wasted but are purchased at higher rates,” he stated. “Or else we would use mules to carry goods, the risky roads would make it difficult for us to thrive our businesses,” he added.

Now it’s a matter of just a few hours for Kadayat to take his goods to the cold store in Kohalpur. Having to use coldstores means farmers get time to bargain with agents and sell their produces at reasonable rates. “Otherwise we would be forced to give away our produces at throwaway prices,” he said.

Thanks to the roads, a lot of people in Surkhet have now shown interest in commercial farming. According to the Chief Officer at the Agriculture Development Office in Surkhet Chitra Bahadur Rokaya, some parts of Surkhet such as Telpani and Harkedanda have been selected for potato farming. “We have identified the best places for potato farming and they are going to be developed as potato blocks. There are also plans to support farmers in different ways. Recently, we distributed potato seeds to farmers,” he said. “This place is bound to see massive changes in the days to come. People will stop going to India for jobs. We lagged far behind just because we did not have good roads.”

SURKHET, Sept 8: Police have arrested two persons from Nepalgunj for investigation into their involvement in the recent killing of... Read More...

SURKHET, Oct 18: When the entire country seems to be immersed in festive mood as the Nepali are celebrating the... Read More...

SURKHET, June 5: The Truth and Reconciliation Commission (TRC) has started the probe into the cases of rights violation committed during... Read More...