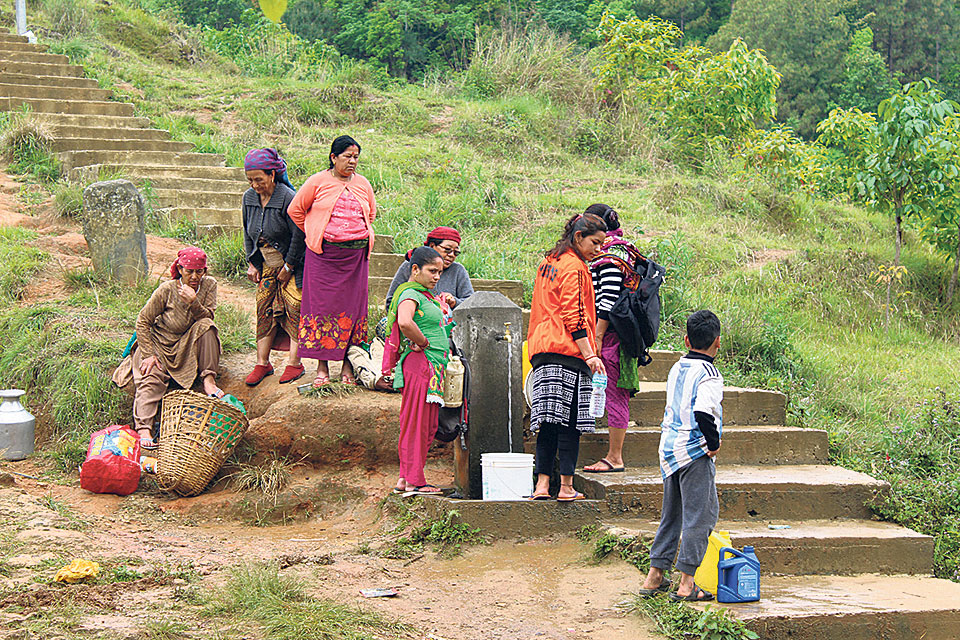 It’s no sin to turn your back to the sun occasionally even if you worship it. It behooves well to plan for feasts and fun in the sun as it requires bare minimum resources in the countryside. You just need to snatch a couple of corn pods from the bunch, peel and extricate the grains, roast them in a handi (earthen fryer) and mix them with some roasted bhatmas (soybean). Never worry about thetna (half-roasted grains) as they team up with the soybean to fight hunger effectively.

Go out to the front yard, spread a hay mat and invite friends and/or family members to enjoy the roasted corn and soybean while the sun shines on your back. The feast becomes a banquet with some buttermilk. If not, water always comes to the rescue. Alternatively, fresh radish green leaves and roots can be included. And chat as long as the cattle and buffaloes do not grunt.

Lucky are those who have a tree of nibuwa (giant yellow lemon) and a plant of jire khursani (rainbow chilli pepper) or any species of green chilli. Pick up some nibuwa and invite friends or families who are eager to listen to yours and share their stories of first crushes and the subsequent ones. And, start peeling the layers of life experiences and the nibuwa kesra (endocarp) simultaneously.

Add some salt, sugar, turmeric, and hot green chilli paste. Be adequately generous as you prepare the green chilli paste. Otherwise, the whole arrangement can go boringly uneventful. Such a feast of intimate friends should not be allowed to go to waste.

Time is of essence when it comes to this sweet and sour feast which needs to be served in leaf plates as soon as it’s ready. It quickly goes bitter in the sun. Upon putting the first morsel of the feast in the mouth, some must start fanning their mouth with their hand. Some must have their eyes welled up and stick their tongues out to cool them down.

Laugh out loud if someone bungles with the hot green chilli paste. There is no harm in laughing at people’s silly faults. Watch out for the people who grind the hot chilli paste and touch their nose and eyelids before washing their finger as they itch. They must be advised to eat bakkal (albedo: outer layer/cover of nibuwa) or some ghee or sugar or drink some cold water so as to help alleviate their pain.

Tired of harvesting the paddy crop in the field and hungry? Forgot to carry along siramla (sweet rice husked after boiling) for snacks? Uproot a gurans (lentil) plant and climb up the highest rock at the top of the field and pamper yourself by devouring the fresh grains inside the kosa (seed coat) while enjoying the beautiful sight of paanja (rows of cut crop spread out to dry) in the terraces.  And keep singing, whistling and humming while resting atop the rock or working in the field.

If there is a gooseberry tree by the field, pick up the fruits, bite them, and drink water.  Hunt for bayar (Indian plum) or a lapsi (hog plum) trees nearby. Blame yourself if munching the siramla snack brings tears to your eyes as lapsi weakens acid and wears away tooth enamel. Rinse your mouth repeatedly for the gooseberry to turn your tongue a sweet candy and for the lapsi to turn it a sour candy.

The fun they have
Are feasts out of reach? Never mind. Fun is within reach and comes at no huge cost. Give yourself a pleasant bath at a sun-drenched public tap by the village when the sun is the hottest. Be careful to not blow up your respect in the village by compelling people to wait who come to fill the drinking water.

Tap is the place where most village women and men map people’s character and body. Hence, minding one’s taptitude (tap attitude) is imperative to deny people of their indulgence in turpitude. Make sure to wear thick and tight underwear to avoid being the source of people’s crude entertainment.

Making a trip to the nearest stream with siblings or peers or friends for bath is another alternative. But the water is not as friendly. However, prostrating and sunbathing on the smooth boulders upon bath is an invaluable reward in addition to the unlimited space to dry the clothes.

Or head off to the fields by the public pastures where large bamboo stick spouts are installed by the fountainhead of water and the well outlets. The water is pleasantly lukewarm. Enjoy the freedom of cleaning your private organs meticulously since you are not being ogled at and pried on.

Soaps and shampoos matter in the villages. Vacationing soldiers (mostly Brahmin and Chhetri) of Nepal Army from the village do use Lux and Lifeboy to create a unique aura around the tap. The ones returning from shantisena (UN peacekeeping missions) generally outsmart their ordinary counterparts.

The soldiers of the British Army do steal the limelight in the villages. Take my word for it, all who-is-who in the village get relegated to Lilliputian status during the stay of these soldiers, who mostly hail from Gurung and Magar communities. The Gurung girls’ attempt to stand out in the crowd only adds to their stress.

Caste and politics
Interestingly, most of the shrewd Brahman and Chhetri people from the surrounding villages scramble to befriend the family members of the soldiers. And note down, most of them learn to drink tinpane (local brew made of millet and yeast) in quest of intimacy with the soldiers only to be gradually accustomed to the drinking habit. The road to their ill-health gets paved with affluenxiety (affluence anxiety).

Just keep wondering about the strange equations of Brahmin and Chhetri youths serving in the Nepal Army and Gurungs and Magars serving in the British Army. It speaks volumes on the primitive mentality and mendacity of the power elites in politics.

It’s no secret how poorly the valetudinarian hill Brahmin and Chhetri leaders have fared despite their irrevocable grip on domestic politics. They have mastered the art of siphoning off all state resources aimed at appeasing their coteries and cementing their electoral prospects rather than uplifting the economic status of hard-working brethren and the citizens.

It is extremely painful to belong to Brahmin and Chhetri castes in Nepal today. Feel guilty about it politically as these castes are perceived to be synonymous with avarice, immorality and corruption nowadays in a significant departure from their original connotation of generosity, morality and renunciation.

In the meantime, developing disenchantment with any fragrance fanaticism is preferable. Most deodorants, antiperspirants and fragrances are reported to contain toxic ingredients such as ‘aluminum chlorohydrate, parabens, propylene glycol and triclosan’. Exposure to some of these chemicals could trigger life threatening allergies and medical conditions in certain people.

These smells do hamper and neutralize the scope of socialization rather than revitalize it as more and more people are skeptical and leery of the usefulness of antiperspirants, deodorants and fragrances. They are averse to their adverse effects. One’s personality is enhanced by an affable and natural smile, not by application of obnoxious and artificial smell.

DOLPA, Aug 21: A dream seen by many Dolpa residents is 500 meters away from being realized: Dolpa being connected... Read More...

Renu Dahal leading by more than 5,000 votes in Bharatpur metropolis
30 minutes ago