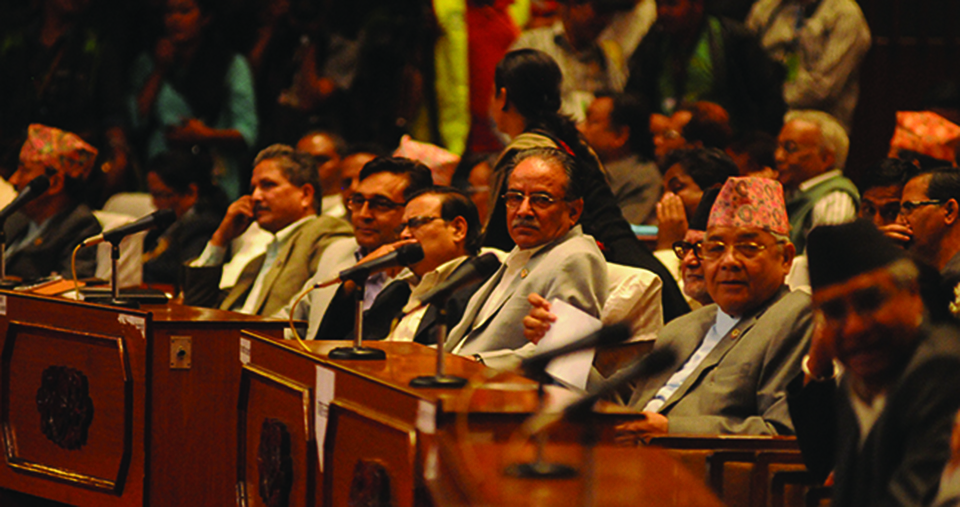 Save for few, it is hard to find a parliamentarian who speaks on behalf of people and the country in Nepal

Nepal has tried and tested parliamentary representative democracy for almost three decades. This system places popularly elected parliament at the center stage of country’s legislation, policy making and governance. Parliament is not only a sovereign deliberative lawmaking institution, but a forum where civic voice, interests and aspirations are effectively articulated, aggregated and highlighted.

A parliament is tasked to carry out three functions: representing the electorate,   making laws, and overseeing the government through hearings and inquiries. These functions are executed effectively only when the parliamentarians have integrity of purpose and have commitment, knowledge and skills to present proper argument and deliberation on public issues.

The great English politician and historian Edmund Burke has called the parliament a deliberative assembly of one nation, with one interest, which should be guided not by local purposes and local prejudices, but the general good.

A member of parliament is chosen, according to him, not as a member of a certain constituency but as the member of the nation. For him the difference between the real and honest parliamentarian and ordinary ineffective parliamentarian is that the former sees into the future, while the latter regards only the present, lives by the day, and acts upon expediency. The former acts on enduring principles for lasting impact.  The democracies like India, Australia and Canada have followed British model of parliamentary democracy where the role of the parliament and parliamentarians is crucial and critical in ensuring effective performance of democratic system.

How parliamentarians raise and articulate the issues of wider national concern and the efficacy with which they  participate in the debates and  deliberations in  the parliament is watched carefully and critically not only by the constituents they represent,  but also by wider political, intellectual and public community. Those who speak on behalf of the people and make effective representation of the communities commit to meaningfully participate in the policy debates.

Such parliamentarians become popular among the electorate and make a mark in the national politics.  In the nineteenth and twentieth century British politics Benjamin Disraeli, William Ewart Gladstone and Winston Churchill rose as distinguished, effective and eloquent speakers in the British House of Commons and later rose to become the prime ministers of the country. Countless other parliamentarians played key roles in bringing the British parliamentary democracy to the current stage of maturity. These veterans were, among others, Richard Cobden, the great exponent of free trade, William Wilberforce, who fought for the abolition of slavery, and John Bright, one of the most ardent and vociferous voices of political reform.

Young leaders like Tony Blair rose to power and became the prime minister thrice owing to, among other things, his brilliant speeches and substantive deliberation as a lawmaker in the Parliament. In neighboring India, parliamentarians like Hiren Mukherjee, Bhupesh Gupta and socialist leaders like Dr Ram Manohar Lohia, Madhu Limaya and BJP leader and former prime minister Atal Bihari Vajpayee are known as brilliant speakers.

Vajpayee was known for his upright factual and gripping speeches. Raj Narain, who had defeated Indira Gandhi in the post-emergency elections, was known for for his rhetoric and thought-provoking speeches. The best performing members of Parliament in India are honored with Sansad Ratna award. The performance of parliament members is generally calculated based on the number of debates they participate in, the number of questions they raise and the number of bills they introduce, and quality and substance of deliberation in the Parliament.

In Nepal, parliamentary democracy and legislative deliberation started only after 1990 when the multiparty democracy was restored.  Since then we have come across at least six parliamentary elections including two Constituent Assembly elections. The constituent assemblies had featured inclusive and comprehensive representation of the people rarely seen in the assemblies and parliaments of this type.

But if we are to assess these parliaments using the measure of quality and contents of deliberations, it is difficult to identify the effective and venerated parliamentarians who have made a mark as a topnotch discussant. One can count only few names. Likes of Gagan Thapa and Pradip Giri have been heard with attention in the parliament and outside. Baburam Bhattarai—former prime minister and coordinator of Nayashakti Party—steals limelight due to his thorough, resourceful and substantive deliberation. His presentations and deliberations offering counterpoints and constructive insights into policy statement, budgetary policies, social issues and problems often catch the attention of media and the public.

But save for these three or four names, it is hard to find a parliamentarian who really speaks on behalf people and the country, who provides quality inputs on deliberations of bills and offers clear direction for the country.

This is the reason our parliament has not been able to generate hopes among the people. We need sincere, erudite and committed parliamentarians to make parliamentary democracy successful.

The author specializes on participatory democracy and local governance

Cabinet meeting underway in Baluwatar, likely to endorse recommendations made by CCMC to contain spread of COVID-19
13 hours ago