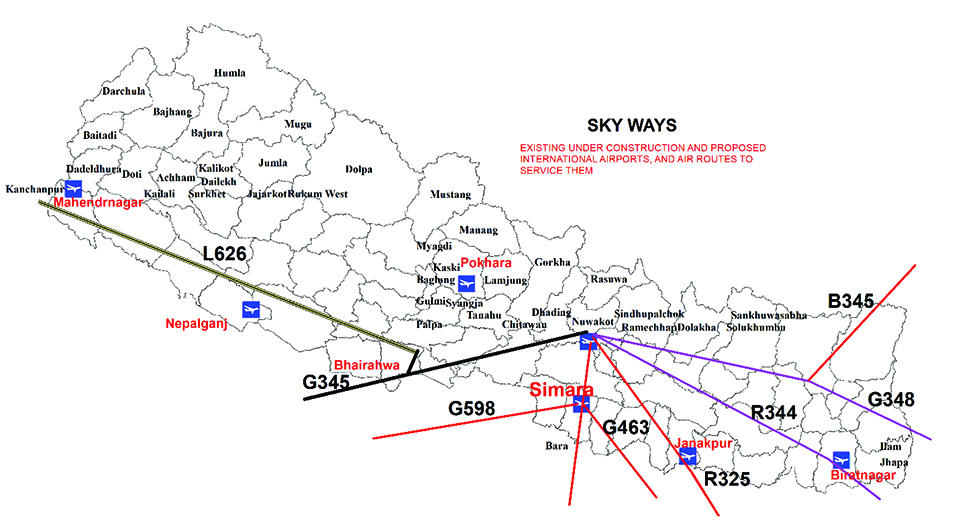 The contributor for Republica.
bhattarai@ucmo.edu

If at all Nepal wants to become an air transit hub of Asia, Gautam Buddha International Airport will help us become one

The proposed Nijgadh International Airport (NIA) is in the news and there have been debates both in its favor and against. I have a great interest in biogeography and ecology of Bara forest because of my PhD research association with this area. This write-up is an attempt to provide real information that I know about NIA construction site. I believe the current government does not like to spend money without detailed research on any area that might end up without any meaningful results. Nepal’s Civil Aviation Minister Rabindra Adhikari is very cautious not to let any development go astray. In his book Road to Prosperity he writes “approving the proposals …without serious study is like taking a leap into the darkness”. I don’t doubt his development vision, but offering some information might help him and others make the informed decision.

In what follows I present four different arguments.

Argument 1: Nijgadh is the only place in Nepal (“a gift from nature”) between Pashaha and Lal Bakaiya rivers that allows holding Nepali plane on the sky for 15-16 minutes no matter from which direction a plane enters into the Nepali sky (See the graphic). Currently, India has allowed only limited routes to Nepal, despite previously agreeing to provide four routes. Probably, if the current Nepali government and Indian government clear some misunderstandings, additional air routes also may be available to Nepal.  If Nepal gets additional air routes through the Indian sky, and if the condition of 100 nautical miles is needed to get to 29,000 ft cruise height within the Nepali sky, instead of proposed Nijgadh airport Gautam Buddha International Airport in Bhairahwa would be the ideal center from geospatial perspective. This applies to all the airplanes no matter through which routes they enter the Nepali sky. Nepal’s west-east extension is 80-88 degree longitudes that cover 818 km length, and Gautam Buddha International Airport is almost 409 km from west and east of Nepal.

Argument 3: It is said that almost all the indigenous trees of the proposed Nijgadh airport site were cut down during the Rana regime. The existing vegetation of the proposed site is in the sapling and pole of secondary vegetation status.

I worked at Tarai Community Forestry Project under the World Bank, establishing Agro-forestry Project at Nijgadh and drilling water tube wells at various places in Bara forests to establish plantation nurseries. I have been familiar with the ecology of this area. The truth of the matter is the area receives very heavy rainfall and biogeochemical cycle is very rapid in this area.

During my PhD research one of the oldest persons at his 90s told me “Jilla me Bara, Subba me Tara” (meaning both stand second to none in Nepal). His logic was that Bara district is good in productivity and it is as efficient as Tara, the government official, who served very efficiently during the Rana period.

Besides, there are thousands of over 100 years old trees including Bhim Sakhuwa that represent the oldest ecology of the proposed NIA.  In fact, the vegetation of the proposed airport site is no less in quality than the vegetation of Parsa National Park. Forest condition of Murtiya is very poor. Murtiya is one of the sites that environmentalists have proposed for the construction of new airport. No huge investment is needed to clear the forest in Murtiya to construct an airport as in Nijgadh. Likewise, if Simara is chosen for expansion of the airport, felling only 70,000 trees would allow us to have an airport that meets the standard of Saudi Arabia, US and UK and it will also meet ICAO’s standard of 29,000 ft cruise height within 100 nautical miles.

Argument 4: The site between Pashaha Khola and Lal Bakaiya, where NIA has been proposed, offers the only gifted site all over Nepal because of drainage facilities. The proposed NIA site has higher water table (water close to the earth surface), which increases the chances of arsenic contamination at the downstream overtime as the air businesses increase. I have observed that in Louisiana, Oklahoma and Florida of the US, no basements are allowed in private and public houses to avoid water contamination and disruptions from higher water table.

I am concerned if high water table will impact landing of heavy airplanes and trigger throughputs contamination once the operation starts. Downstream population living in various villages might have to face arsenic problems. Additionally, this biodiversity rich area has a record of receiving 217 ml rainfall in 24 hours (July 2002). When all natural forest is converted into impervious surface it might inundate 6,260 hectare of farmlands of downward community affecting over 435,312 people living there.

We need to become realistic while making decision to construct the largest airport, if we want to make it a game changer of our economy. We waited for so long to start Arun III just to monitor the ecological niche of eel fishes. Let’s be patient, collect more information and make informed decisions so that development becomes sustainable. If at all, Nepal wants to become an air transit hub of Asia, Gautam Buddha International Airport will help us become one. Over the past 250 years, Nepal has not made any strides in producing lighter goods only to be exportable by air, and no promising businesses in Nepal are in existence to attract international trade.

Just dreaming of making Nijgadh a transit hub of Asia without conducting proper survey of international air services might make us a development victim. At this point, it would be too ambitious for Nepal to aspire to become Asian air hub, even while two recently brought wide-body airplanes have not found their needed destinations.

Let us cut our coat according to our clothes, without being too ambitious.

The author is a professor of Geography at University of Central Missouri, US

Nepal appears to be poised for a heedless jump into the thick of nuclear research reactors and nuclear fuel cycle... Read More...