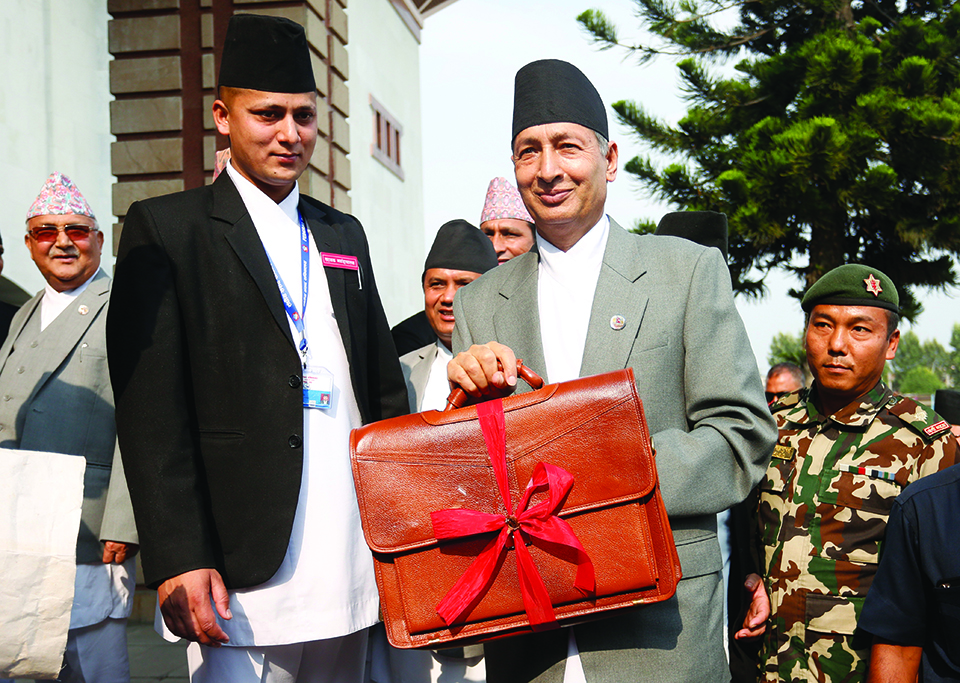 Government has decided to set up model agriculture farms in all seven provinces. Will these farms be established and operated in time?

Finance Minister Yubaraj Khatiwada presented the details of income and expenditure estimated for the fiscal year 2018/19 on May 29 budget speech. The total amount of the federal budget is Rs 1,315 billion with a major focus on education and infrastructure. The budget targets to achieve eight percent economic growth and aims to create new jobs for 500,000 individuals. Priority on education and infrastructure building in the budget cannot be questioned from the point of achieving a sustainable growth. However, the allocation of budget in agriculture has raised some doubts whether eight percent economic growth could be achieved because our growth is heavily based on agricultural production. For the agriculture sector, which includes agriculture, livestock, land management and cooperative, the allocated budget for this fiscal year is Rs 40.14 billion—that is 3.05 percent of the total budget. This budget is not significant in increase as compared to the budget of last fiscal year. The budgetary allocation shows that the agriculture is not in the priority list of the government.

Agricultural output, which is slightly less than one-third of the country’s GDP, is targeted to double in five years. The agricultural growth target for the fiscal 2018/19 is 4.5 percent. Several such targets made in the past were never met. This is another ambitious target as growth has slowed miserably in the recent years. Farm output has doubled only over the period of a decade in the recent past. The total agricultural output in 2008/09 was Rs 414 billion and is expected to reach close to Rs 1,000 billion in the current fiscal year.

In order to achieve the agricultural target and double the agricultural output in five years, the government claims to promote agro industries, encourage use of technology in agriculture and run the Prime Minister’s Agriculture Modernization Project in full swing. But agricultural experts are of the opinion that without addressing three major production constraints of agriculture—irrigation, input supply and use of modern technology—these targets will never be met.

We all know that irrigation is a key sector for agriculture development. It can induce a tangible increase in production only when its interventions are harmonized with agriculture. But intra-sectoral coordination between irrigation and agriculture is very weak. Furthermore, it is also not integrated with agriculture in our federal system. Therefore, we are unlikely to achieve target of doubling agricultural output in the next five years without addressing these major challenging issues.

Although the budget has announced various incentives for better use of production inputs, there is no program for making the supply system reliable. The provision made in the budget to establish factories for producing fertilizers, plant protection chemicals and agro-machineries may take two to three years to come into operation. The viability of these factories, especially fertilizer plant, will be another issue. Studies of the past have questioned the sustainability of fertilizer plant due to high cost of production. The budget has not brought any alternative for smooth supply of fertilizer.

The budget says fertilizers, seeds, agro-machinery and other necessary services will be provided by the local level agriculture service centers. But it is not yet clear how many such service centers will be there in the local levels and what their structural composition will be like. Thus implementing this program is likely to be very difficult this fiscal year.

Where are the details?

Provision has been made to provide subsidy for the planting materials of tea, coffee, large cardamom, areca nut, potato, banana and lime through Prime Minister Agriculture Modernization Program (PMAMP). Interestingly, fruit crops of national importance such as mandarin orange, Junar, kiwifruit, mango, litchi and apple are taken out from the subsidy list, while minor fruit like areca nut is included. The total budget allocated for the implementation of this program is Rs. 4.77 billion, which is same as for this fiscal year. The PMAMP is said to be implemented in revised format. But there are no details of this revised format.

The budget has made a provision of providing 25 percent grant to farmers’ cooperatives for purchasing equipment for processing milk, meat, fruits and vegetables, and similar amount of grant will be provided for establishing factories of silk, cotton and wool. But there is no substantial support program to increase production of these commodities.

Sugarcane growers will get grants based on production. The government has proposed the minimum support price of major crops—paddy, wheat and sugarcane—but lacks necessary storage facilities. We do not know how this target will be met. The government is going to bear 75 percent of insurance premium on agriculture, livestock and fishery. As in the past, the federal budget has allocated Rs 5 billion for subsidizing interest in agriculture credit.

In terms of modern technology, establishment of Agriculture Knowledge Centers (AKC) at all local levels will be helpful provided they are adequately equipped with necessary human resources and technologies. They also need to be supported technically by the research centers. Realizing this fact, the government has decided to set up model agriculture farms in all seven provinces. But the question is: Will these farms be established and operated in time?

As a matter of fact, this year’s budget has not given adequate priority to agriculture. In the ministry-wise budget allocation, Ministry of Agriculture, Land Management and Cooperatives is in the ninth position. There is no program to make fertilizer supply system reliable. Another crucial issue is rapid urbanization of fertile lands. The budget has kept the Agriculture Development Strategy (ADS) at low profile which is at its second year of implementation. The budget has discouraged private sector to invest in agriculture.

Based on this, it can be said that target of doubling agricultural output in half a decade is unrealistic. It was expected that new budget would be a path-breaker for agriculture development, but it came in a normal fashion. This budget cannot take agro-economy on faster gear to achieve the target of an eight percent growth.

Although agriculture is a prioritized sector in policy document and donors are involved in its development, it stands at seventh... Read More...

Oli accuses police of failing to give security to party cadres

KATHMANDU, May 10: CPN-UML Chairman KP Sharma Oli has accused the police administration of failing to intervene in incidents of physical... Read More...

Agriculture Fair on Saturday and Sunday

BHAKTAPUR, March 31: The 2nd edition of the 'Agriculture Fair and Exhibition 2073' is being held in Bhaktapur district. ... Read More...