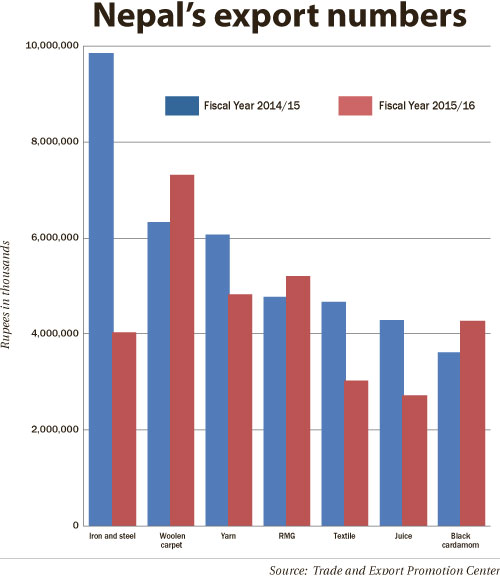 KATHAMNDU, July 2: Export of woolen carpet, Ready Made Garment (RMG) and cardamom improved in the first 11 months of Fiscal Year 2015/16, while export of iron and steel suffered in the same period compared to figures of the same period of the past fiscal year.

According to figures released by Trade and Export Promotion Center (TEPC), the country exported Rs 7.3 billion worth of woolen carpets in the review period, up from Rs 6.31 billion in the same period of 2014/15.

Woolen carpet was the country's largest export in terms of monetary value in the review period. It was in the second position in the country's top exports list in the same period of 2014/15.

Export of iron and steel, however, plummeted by 60 percent to Rs 4.02 billion in the review period compared to export figures of the first 11 months of 2014/15.

According to TEPC, export of yarns and textiles saw a decline of 27 percent and 36 percent, respectively, to Rs 4.82 billion and Rs 3.02 billion. Likewise, export of juice fell by 36 percent to Rs 2.72 billion only.

However, there was not much drop in imports in the review period despite nearly 20-week Indian blockade. The country imported goods worth Rs 680 billion in the first 11 months of 2015/16, compared to Rs 707 billion in the same period of 2014/15.

“Import was not affected much despite the blockade as demands were met by bringing more finished goods,” Pandey.

Remittance in-flow was more or less at the same level in the review period. Similarly, revenue collection is closer to the target set by the government because import was not affected much despite the blockade.

KATHMANDU, Sept 4: Carpet producers have urged the government to do the needful for increasing export of Nepali hand-knotted carpet. Read More...

A press conference organized by Label STEP and Jan Kath was held on Thursday at Hotel Yak and Yeti, Durbar... Read More...