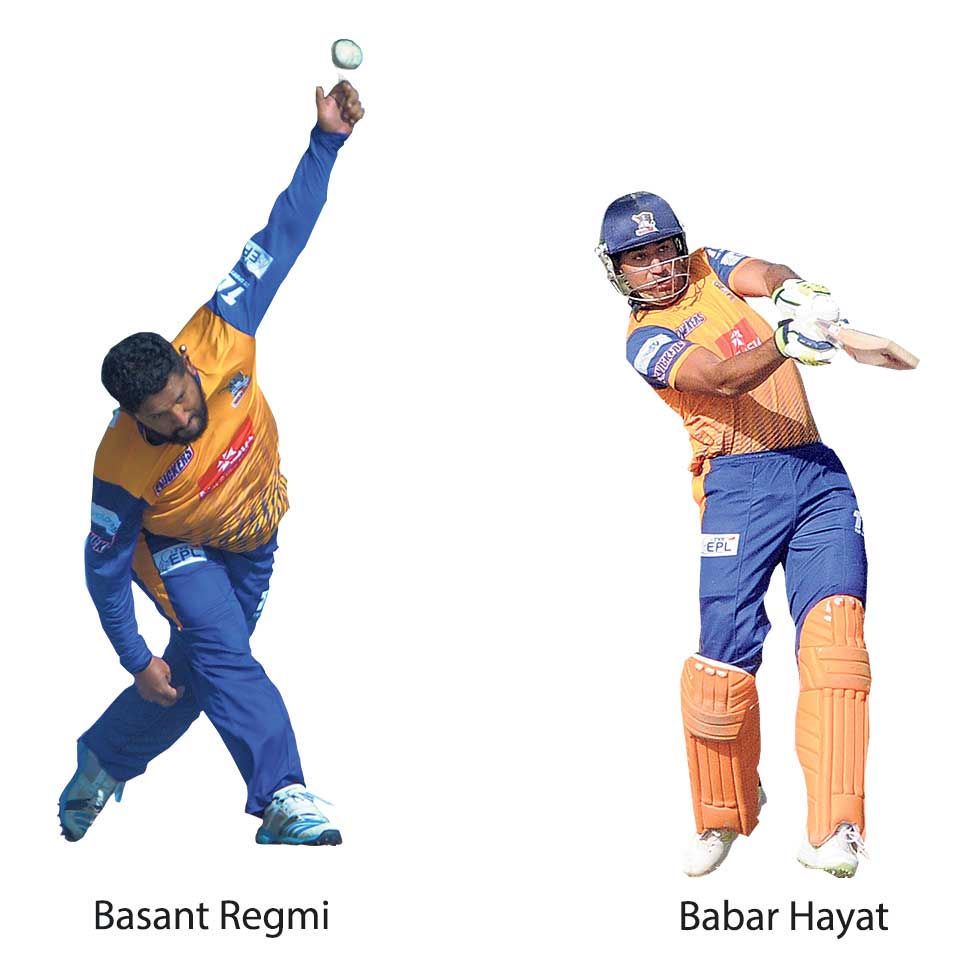 KATHMANDU, Dec 6: The second edition of the Everest Premier League (EPL) concluded on December 30, with Paras Khadka-led Biratnagar Warriors clinching the title by a run over Sharad Vesawakar’s Bhairahawa Gladiators at the TU Cricket Ground in Kirtipur.
Here are some impressive performance as well as forgettable stats of the players in different departments:

Batting Hits
Foreign
Babar Hayat (Matches: 7, Runs: 313, SR: 139.11)
Warriors’ Babar Hayat was the standout player of the tournament with the Hong Kongese captain amassing the most runs.
He scored the highest total by a player with 81 runs off 42 balls which included five boundaries and six maximums against Chitwan Tigers in the league phase. The right-handed batsman scored two more fifties against Kathmandu Kings XI and Gladiators.
Hayat, who registered a total of 25 fours and 17 sixes in the premier league, was awarded with the man-of-the-series.
Anshuman Rath (Matches: 7, Runs: 271, SR: 101.11)
Anshuman Rath, who is also a member of Warriors and Hong Kong national cricket team finished as the second highest run-getter in the EPL.
His highest run in a single match was 60 runs off 61 balls comprising six fours and two sixes against Pokhara Rhinos. His second 50 came against Gladiators.
Rath played second fiddle to Babar scoring 31 boundaries and four sixes in the premier event.
Jaykishan Kolsawala (Matches: 7, Runs: 227, SR: 109.13)
Lalitpur Patriots’ Indian recruit Jaykishan Kolsawala scored his only fifty against Pokhara Rhinos scoring 56 runs off 45 balls including four boundaries and three sixes. He consistently impressed the crowd with his cameos at the top of the batting order for Patriots on his route to hit 24 boundaries and eight sixes.
Nepal
Aarif Sheikh (Matches: 8, Runs: 187, SR: 117.61)
The most impressive Nepali batsman in the tournament was Aarif Sheikh as he piled up most runs for Gladiators. He smashed 11 fours and 10 sixes throughout the EPL. He missed his fifty by two runs against Pokhara Rhinos in which he hit three fours and three sixes.
Paras Khadka (Matches: 7, Runs: 175, SR: 123.23)
Skipper of Nepal’s national cricket team and Biratnagar Warriors Paras Khadka lit the TU ground with his fireworks smashing four boundaries and whopping 13 maximums in the marquee event.
His best of 42 runs off 24 balls came in the first qualifier smashing four sixes against Gladiators.
Sunil Dhamala (Matches: 6, Runs: 171, SR: 93.44)
Pokhara Rhinos’ shining star Sunil Dhamala was the most impressive Nepali opening batsman of the tournament.
He registered the second-highest individual score in the tournament with his unbeaten 70 runs off 62 deliveries including five maximums against Lalitpur Patriots in the last league match.

Flops
Foreign
Sagar Kumar (Matches: 5, Runs: 71, SR: 93.42)
Indian recruit for Kathmandu Kings XI Sagar Kumar was one of the flop batsmen of the tournament as he could not provide justice to the much coveted foreign quota.
He could not manage a single six for Kings XI and had the highest score of just 28 runs.
Sabez Khan (Matches: 5, Runs: 46, SR: 79.31)
Chitwan Tigers’ Indian batsman Sabez Khan had more torrid times with his bat and his team could not even challenge for playoffs.
He struggled to score any boundaries in the premier league but he registered three sixes.
Akshu Fernando (Matches: 5, Runs: 36, SR: 87.80)
Sri Lankan batsman Akshu Fernando failed to get runs out of his bat and was one of the flops of the event.
He hit just two boundaries in the tournament and his highest score was mere 15 runs.
Nepal
Binod Bhandari (Matches: 6, Runs: 22, SR: 104.76)
Right-hand middle order batsman desperately failed to create an impact for Pokhara Rhinos hitting only three boundaries throughout the tournament, with the highest of just 12 runs. He is not even in the list of top 50 run-getters in the tournament.
Aasif Sheikh (Matches: 7, Runs: 35, SR: 60.34)
Despite winning the tournament and playing all the matches for Warriors opening the batting, Aasif Sheikh could not get going in any match.
He hit five boundaries and failed to register any six, with his high score being just 21 runs.
Pradeep Airee (Matches: 7, Runs: 35, SR: 56.45)
Gladiators’ Pradeep Airee could not make any amends with the bat despite playing in different batting positions for Gladiators in EPL.

Flops
Foreign
Farveez Maharoof (Matches: 5, Wickets: 4, Eco: 4.69)
Three of the four wickets for Kathmandu Kings XI’s Sri Lankan captain Farveez Maharoof came in a match. He struggled with his fitness throughout the EPL.
Sahan Adeesha Appuhami (Matches: 5, Wickets: 3, Eco: 7.90)
Another Sri Lankan player, another injury prone seamer, another flop. Sahan Adeesha had disastrous bowling figures as he gave away 112 runs in his 14.1 overs throughout the tournament. He could only deliver a bowl in the final of the EPL before getting injured.

Dipesh Bhandari (Matches: 3, Wickets: 2, Eco: 7.42)
Lalitpur’s late Indian recruit Dipesh Bhandari was one of the poor bowlers in the tournament. He conceded 13 runs against Rohit Poudel in the final over of the second qualifier.

Nepal
Jitendra Mukhiya (Matches: 3, Wickets: 1, Eco: 6.51)
Kathmandu Kings XI’s Jitendra Mukhiya was arguably the worst Nepali bowler of the tournament as he conceded 63 runs in his 9.4 overs.
Mehboob Alam (Matches: 3, Wickets: 2, Eco: 7)
Patriots’ Mehboob Alam also had disastrous bowling performances as he gave away 77 runs in 11 overs. He also was in the receiving end of another Rohit Poudel special.
Sompal Kami (Matches: 5, Wickets: 4, Eco: 6.60)
Blame his team, or his captain, but one of the best talents currently in Nepali cricket, Sompal Kami simply failed to impress the crowd with his bowling. He conceded 121 runs in his total 18.2-over span.

Wicket-keeping
Hit
Chitwan Tigers might have failed to impress the crowd with their bowling or batting performances, but wicket-keeper Dilip Nath surely did not. Nath dismissed 11 batsmen in his five matches with four catches and seven stumpings in the tournament.

KATHMANDU, April 15: Team Chauraha Dhangadhi retained its title with a 21-run win over Kathmandu Goldens on Friday in the second... Read More...