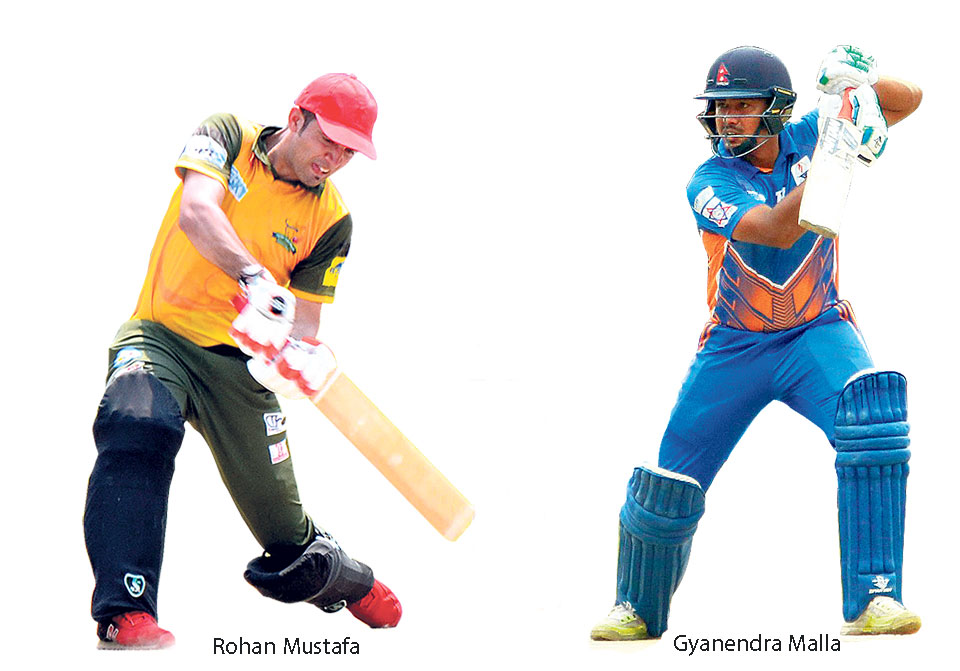 KATHMANDU, April 15: Team Chauraha Dhangadhi retained its title with a 21-run win over Kathmandu Goldens on Friday in the second edition of the Dhangadhi Premier League (DPL) played at the Seti Zone Police Cricket Ground in Dhangadhi.

The Sompal Kami-led Chauraha had finished second in the league phase with three wins and two defeats and accumulated six points, while Gyanendra Malla’s Kathmandu had topped the league with nine points comprising four wins out of the five matches it played.

Chauraha and Kathmandu faced each other three times in the tournament in which the former won two and lost a game. Kathmandu beat Chauraha by seven wickets in the first match, while Chauraha won the qualifier one with a wicket.

There were incredible batting and bowling displays by the local and foreign players, while there were forgettable performances as well in the tournament.

Here are few hits and misses of the tournament:
Batting hits

Foreign
1) Rohan Mustafa (Team Chauraha Dhangadhi)
The Pakistan-born United Arab Emirates captain for Chauraha Rohan Mustafa was the best foreign batsman in the tournament as he helped his team register its second consecutive title with his impressive batting figures.

Mustafa hit a total of 198 runs in the six matches he played in the tournament with a strike rate of 121.47 which included 11 sixes and 10 fours.

He had the highest score of 60 runs off 42 deliveries including four sixes and four boundaries against Kathmandu in the final which was one of the major reasons behind Chauraha securing the title.

Mustafa was named the best player of the tournament and was rewarded with a 200 CC Bajaj motorcycle.

2) Babar Hayat (Biratnagar Kings)
The Hong Kongese captain for Biratnagar Kings, who could not make the playoffs finishing fifth with four points with two wins out of five, was one of the top five batsmen and the second best foreign batsman in the tournament.

Even though his team failed to qualify to the playoffs, his 186 runs in the five matches he played made some impact for Biratnagar which included two fifties as well. He hit 17 maximums and 12 boundaries and had a strike rate of 200, the best in the tournament.

He had the highest score of 67 runs off 33 balls including seven sixes and three fours in a five-wicket loss at the hands of Kathmandu on April 6.

He scored a total of 178 runs in the six matches he contested in which included 10 sixes and 14 boundaries with a strike rate of 140.15.

He had the highest score of 58 runs off 42 deliveries including four sixes and four fours in a five-wicket defeat at the hands of Kathmandu in the qualifier two match on Thursday.

Nepal
1) Gyanendra Malla (Kathmandu Goldens)
National team vice captain and Kathmandu captain Gyanendra Malla was the standout batsman of the tournament, but failed to get his team win the title.

He scored the highest 248 runs in eight matches he played in the tournament which included 15 maximums and 14 fours with a strike rate of 131.91.

He was one of only five players to hit two fifties in the tournament as his highest score of 68 not out off 40 deliveries which included four sixes and five fours in a five-wicket win against Biratnagar on April 6.

2) Amit Shrestha (Kathmandu Goldens)
Amit Shrestha of Kathmandu was by far the second best player of the tournament and was only six runs behind the total runs of Malla.

He was also among the batsmen who hit two fifties and his highest score was 81 not out off 65 balls which included four sixes and nine fours in the curtain-raiser when Kathmandu defeated Chauraha by seven wickets.

3) Sunil Dhamala (Team Chauraha Dhangadhi)
Sunil Dhamala was among the three most run getters of the tournament as he was also one of the integral members of Chauraha in title winning campaign.

Dhamala hit a total of 229 runs which included seven sixes and 24 boundaries and had a strike rate of 106.51 in the seven matches he featured in.

He had the highest score of 78 runs off 63 balls including three maximums and eight fours in the final win over Kathmandu.

Paudel hit a total of 30 runs in the six matches he played including two maximums and a four. His highest was 11 runs with a strike rate of 115.38.

2) Sufyan Mehmood (Rupandehi Challengers/Oman)
Oman national team player Sufyan Mehmood was one of the poor batting performers of the tournament as he could not help his team Rupandehi escape the last place in the league phase.

He hit a total of 43 runs including three sixes and a four and had a strike rate of 89.58 in the five matches he played in. His highest was unbeaten 20 runs.

3) Ashfaq Ahmed (Team Chauraha Dhangadhi/UAE)
As Mustafa proved to be a promising player in both batting and bowling, his national teammate Ashfaq Ahmed just could not shine in batting.

Ahmed scored a total of 67 runs in the six matches he played which included three sixes and eight boundaries. His highest was 30 runs with a strike rate of 111.66.

Airee scored a total of 75 runs in the five matches he played in the tournament hitting four sixes and a boundary. His highest was 27 runs with a strike rate of 89.28.

Bowling hits
Foreign
1) Sunny Patel (Kathmandu Goldens)
Indian recruit Sunny Patel was the best foreign bowler and the second best bowler of the tournament and guided his team Kathmandu to the final with his impressive bowling figures.

Patel picked up 13 wickets in the eight matches he played in giving away 130 runs in the 29 overs he bowled in the tournament with an economy of 4.48.

He had the best bowling figure of the tournament with 10/6 in a five-wicket win over Mahendranagar in qualifier two on Thursday which included a maiden over.

2) Rohan Mustafa (Team Chauraha Dhangadhi)
Mustafa was just as good with the bowling as he was with his batting. He was one of the top six most wicket takers of the tournament and helped his team in defending the target in many occasion as well.

Mustafa took a total of nine wickets in the six matches he played in conceding 158 runs in 22 overs with an economy of 7.18.

3) Suboth Bhati (Kathmandu Goldens)
India’s Suboth Bhati was crucial in guiding Kathmandu reach the final with his impressive bowling stats as he took just a wicket less than Mustafa.

Bhati claimed eight wickets in the seven matches he featured in giving away 129 runs in the 23 overs he bowled in the tournament.

With an economy of 5.60, he had the best bowling figure of 10/3 in an 11-run win over CYC Attariya including a maiden over on April 4.

He took a total of 14 wickets in the seven matches he played in giving away 185 runs in the 26 overs he bowled.

With an economy of 7.11, he had the best bowling figure of 37/4 in an eight-wicket win over Mahendranagar United on April 3.

2) Rashid Khan (Kathmandu Goldens)
He became the third highest wicket taker of the tournament finishing only behind Patel and Bhandari. His crucial bowling helped Kathmandu finish as runner-up in the tournament.

Khan pocketed 11 wickets in the eight matches he contested giving away 216 runs in the 25.3 overs he bowled with an economy of 8.47.

He maintained the best bowling figure of 6/4 in a 63-run victory over Rupandehi Challengers on April 2.

3) Shuvankar Urao (CYC Attariya)
Shuvankar Urao became one of the only four bowlers who managed to take their wicket tallies to double digits in the tournament, but couldn’t help his team avoid a defeat in the eliminator match against Mahendranagar.

Urao nicked 10 wickets in five matches giving away 57 runs in 13.2 overs with an economy of 4.27, the best in the tournament.
He had the best bowling figure of 7/3 in a nine-wicket win over Rupandehi on April 1.

Bowling flops
1) Karan KC (Mahendranagar United/Nepal)
Karan KC failed to provide innovation to Mahendranagar with his bowling as he simply failed to capitalize on his opportunities for the team.

KC picked up just a wicket in six matches he played in conceding 123 runs and with a poor economy of 10.85.

Gauchan pocketed just a wicket in five matches he played in giving away 99 runs with an economy of 7.61.

He picked up just a wicket conceding 82 runs in his nine-over spell with an economy of 9.11.

4) Sufyan Mehmood (Rupandehi Challengers/Oman)
Sufyan Mehmood was just as poor with the bowling as he was with his batting and could not prevent his team from getting knocked out of the tournament from the league phase.

He nicked three wickets in the 10 overs he bowled giving away 98 runs with an economy of 9.80.

KATHMANDU, March 22: The Ruslan Dhangadhi Premier League has unveiled the tie-sheet for the second edition of the tournament amidst a... Read More...