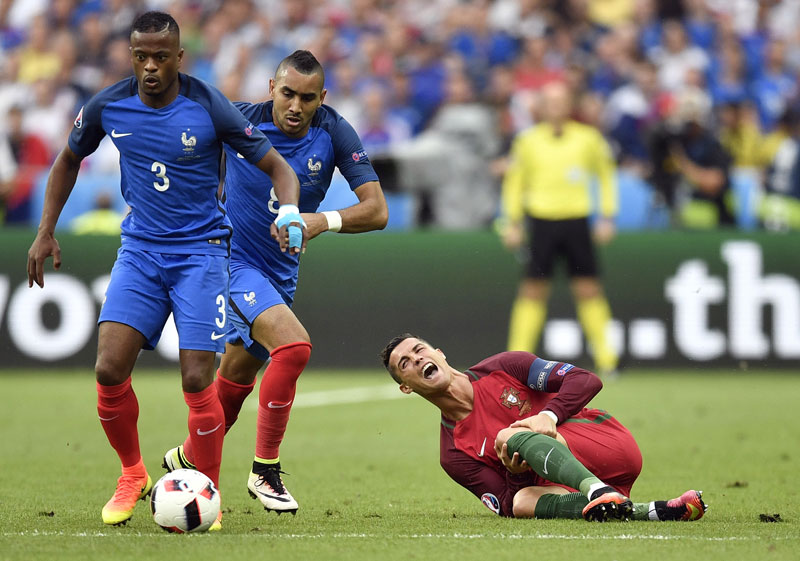 SAINT-DENIS, France, July 11: Football is a cruel game. Sometimes even for its winners.
Cruel because Cristiano Ronaldo had to watch the victory of his life — at least one of them — from the sidelines.

Portugal's name, for the first time, is now engraved on a major trophy. But one of the enduring memories of the European Championship final will be that Ronaldo played too small a part in the 1-0 win against France for him to deserve being anointed as world player of the year for a fourth time. Truth is, Portugal played better without him.

And cruel because France lost in the very stadium that suicide bombers attacked last November. After that horror there was a solid argument to be made that the French would have been more endearing winners, that a pick-me-up trophy could have helped speed their recovery from the trauma.

And also cruel because in six games before they lost their scoring touch in the all-important seventh match, the French on balance played better football at Euro 2016 than Portugal.

Wales, in the semifinals, was the only team the Portuguese beat inside of 90 minutes. Against France, it took them 109 minutes for Eder to burst through Les Bleus' defenses, with a stunning strike.

Let's also not forget that, in Portugal, Europe has a champion that didn't win any of its group-stage games and only squeezed into the knockout stages, with just three points, thanks to the more forgiving format adopted for this expanded first tournament with 24 teams. Critics who feel that the new system's addition of eight teams has come at the expense of footballing quality will doubtless argue that Portugal's victory proves them right.

But, as the French themselves say, "c'est la vie" — or, as English speakers would say, "that's football." Because football's stubborn refusal to follow the script is what makes it so compelling, this final again offering strong evidence of that.

Who, after all, would have penned only a cameo role for Ronaldo, now the proud owner of one type of winner's medal that Lionel Messi doesn't have, in Portugal's Hollywood moment?

As at Euro 2004, we again saw Ronaldo cry — this time after his left knee buckled in a scrap for the ball in the 9th minute with Dimitri Payet. Normally, the French winger tends not to bother himself with the grunt work of tackling and defending. But Payet and his teammates were combative, even borderline aggressive, in the opening half where they quickly swarmed over Portugal's defenses. France, a team that used to be bullied, most infamously in losing a 1982 World Cup semifinal to Germany, was the more physical side.
To be fair to Payet, the injury to Ronaldo wasn't malicious, but rather just one of those things that can happen when one man clatters into another at an awkward angle.

Portugal's captain tried soldiering on. When he sat down on the field, distraught, in need of treatment, a moth settled on his right eye, as if coming to dry his tears. With the knee strapped up, a sprint up field that finished in a hobble made it clear that Ronaldo couldn't continue. Referee Mark Clattenburg called on the stretcher bearers and that was it. Ronaldo's final was over, after just 25 minutes.

Liberated of their attention-grabbing superstar, no longer at the beck and call of his demands to give him the ball, his teammates played better, sharing the workload, getting into France's box in numbers and giving French goalkeeper Hugo Lloris more to think about.

For the French, this will be remembered as another final they should have won, like the 2006 World Cup final unhinged when Zinedine Zidane head-butted Marco Materazzi. Euro 2016 top scorer Antoine Griezmann twice came close to winning it. And Andre-Pierre Gignac saw what would have been a certain match-winner rebound off the post in injury time before the game went to extra time.

But, with time, the if and buts will perhaps matter less than the fact that reaching this final was proof that France is now out of the long trough that followed its 2006 World Cup loss to Italy, with the nadir being a strike by French players at the 2010 World Cup in South Africa.

Going forward, France again has a team it can be proud of. All but one of its starting 11 against Portugal either play abroad or, in the case of Barcelona-bound Samuel Umtiti, are on their way overseas. The French domestic league's bleeding of players to foreign shores proved to be Les Bleus' gain at Euro 2016. Their street-wise football and their handling of the heavy weight of host-nation expectations owed no small debt to the experience and expanded world view players have picked up on their travels. Eder, Portugal's match-winner, also plays overseas, for Lille in France.

From France, football will now look, with some trepidation, eastward to Russia, host of the sport's next major tournament, the 2018 World Cup. Then will come Euro 2020, which will be spread confetti-like across 12 host countries, followed by the 2022 World Cup in Qatar.

All present logistical challenges for traveling fans. Although the quality of the football at Euro 2016 wasn't always much to shout about, it will be fondly remembered for easy French pleasures and for France's security measures that helped keep the 31-day tournament safe from the threat of more terror attacks without souring the mood.
For that, we can all be grateful.

MADRID, May 4: Atletico Madrid striker Diego Costa haunted Arsenal again by firing his side to a 1-0 win in Thursday’s... Read More...

RIO DE JANEIRO, Aug 6: The hooliganism at the European Championship in France could affect the availability of alcohol at... Read More...

Madrasa education to be included in government curriculum
19 hours ago