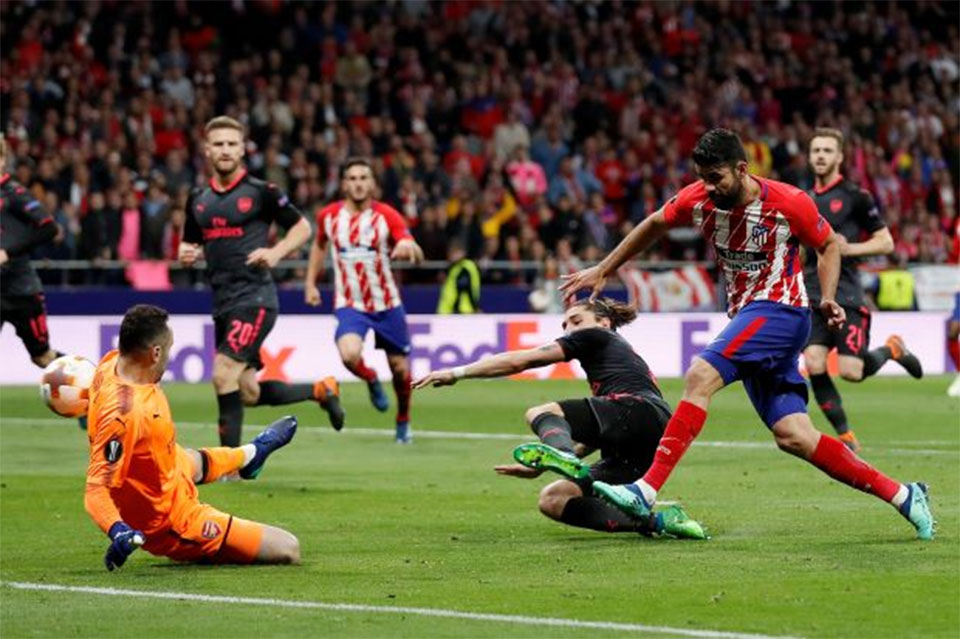 MADRID, May 4: Atletico Madrid striker Diego Costa haunted Arsenal again by firing his side to a 1-0 win in Thursday’s Europa League semi-final second leg to send the Spaniards into the final and deny Arsene Wenger a dream end to his long reign as Arsenal coach.

Atletico won the tie 2-1 on aggregate and will meet Olympique de Marseille in the final in Lyon on May 16.

Costa proved a handful for Arsenal when he played for Chelsea and the Spain striker broke the deadlock in a tight, tense game at the Wanda Metropolitano, striking in first-half stoppage-time after being played in by Antoine Griezmann.

“We knew that we would have an extra man on our side as we were playing at home with our supporters,” Costa said. “You can feel it on the pitch, it gives you a real boost.

“It was very important to get there because Atletico are a great club and need to play in finals. I always get excited playing against Arsenal, they really motivated me a lot when I played in England.”

Arsenal defender Laurent Koscielny was carried off on a stretcher early in the first half with a suspected torn Achilles tendon which threatens to rule the France international out of the World Cup.

Without Koscielny, Arsenal struggled to cope with Costa’s power and the flair of his attacking partner Griezmann, who scored a late equaliser in the 1-1 first-leg draw after Atletico had played most of the game with 10 men following Sime Vrsjalko’s red card.

Vrsjalko’s suspension forced midfielder Thomas Partey to deputise at right back but he did a superb job keeping Arsenal at bay.

Atletico coach Diego Simeone was banned following his foul-mouthed rant at the Emirates Stadium but his fellow Argentine assistant German ‘Mono’ Burgos made up for his absence by whipping up the home side’s famously passionate fans from the touchline.

Wenger’s team were blunt in attack against a typically resilient Atletico defence and they only had one shot on target, a distance strike from Granit Xhaka which was not enough to beat goalkeeper Jan Oblak.

Atletico did not create many chances but they always looked in control and kept a remarkable 12th consecutive clean sheet in all competitions at their Wanda Metropolitano stadium to reach a fifth European final since 2010.

Arsenal, meanwhile, were left to reflect on how they failed to capitalise on their man advantage in the first leg and Wenger will leave the club he has been at for 22 years without winning a European trophy, having lost the finals of the 2000 UEFA Cup and 2006 Champions League.

The English side were also denied a route into next season’s Champions League, which means they have failed to qualify for Europe’s top competition two years in a row after previously playing in it for 19 successive seasons.