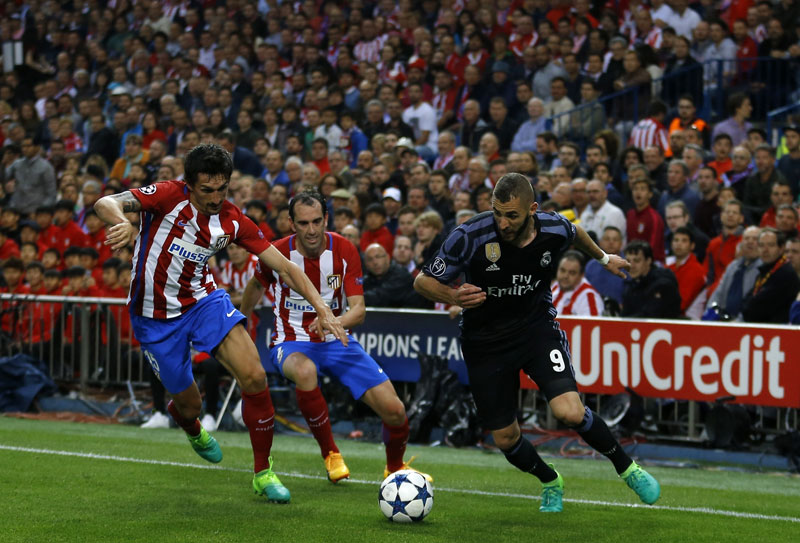 MADRID, May 11: Atletico Madrid gave its passionate fans hope early on, but in the end it was city rival Real Madrid that celebrated a return to the Champions League final.

Madrid withstood an early onslaught by Atletico to reach a third Champions League final in four years despite a 2-1 loss on Wednesday.

Atletico, which trailed 3-0 after the first leg, scored twice in the first 16 minutes at the Vicente Calderon Stadium to move within a goal of sending the semifinal, second-leg into extra time. But Francisco "Isco" Alarcon netted a crucial away goal for Madrid before halftime to secure a 4-2 victory on aggregate and a spot in the final against Juventus on June 3 in Cardiff.

"We knew we were going to suffer, but we are extremely happy to have made it to the final," Madrid coach Zinedine Zidane said. "It's been a very long road and it hasn't been easy. And to do it for the second year in a row, we need to congratulate everyone in this club."

Atletico ends its Champions League campaign without a shot at the title and with its fourth straight elimination to its powerful Spanish rival. Madrid defeated Atletico in the final last year and in 2014, and also eliminated the crosstown opponent in the quarterfinals in 2015.

"I'm happy and proud to have shown what we are all about," Atletico coach Diego Simeone said. "When we said we believed in a comeback, a lot of people didn't take it seriously. The first 30, 35 minutes we played will remain in the fans' memory for a long time. But we were playing against a great rival and they took advantage of our mistake in defense."

Madrid will try to become the first team to win back-to-back titles since the competition's new format was created in 1992. It will be the first team to have a chance to defend its title since Manchester United made it to consecutive finals in 2008-09.

Atletico kept its hopes alive on Wednesday by scoring two early goals to ignite the crowd at the packed Calderon.

Saul Niguez netted the first goal with a header off a corner in the 12th minute, and Antoine Griezmann added to the lead four minutes later by converting a penalty after Fernando Torres was tripped by defender Raphael Varane. Griezmann, who had missed a penalty in last year's final against Madrid, slipped slightly just as he was taking the shot. Madrid goalkeeper Keylor Navas got his glove to the ball, but couldn't keep it out.

"They started strongly but eventually we were able to find our game," Zidane said. "In the second half, we were much better."

The early goals gave Atletico real hope of causing an upset, but Simeone's team was unable to keep pressuring as it did in the opening minutes.

The match was evenly-balanced when Karim Benzema came up with a spectacular move to set up Isco's goal. The French striker was surrounded by three Atletico defenders at the byline, but somehow found a way past all of them with a pair of quick touches. He sped into the area and sent a backward pass to Toni Kroos, whose shot was parried by goalkeeper Jan Oblak. But Isco pounced on the rebound to score from close range.

"It was difficult to maintain that same rhythm, and against a team like Madrid your first mistake will be costly, and that's what happened," Simeone said. "Our first half was nearly perfect but that great play by Benzema cost us."

Zidane was unable to shed any light on the French forward's inspired piece of skill.

"After the game, I asked Benzema how he was able to do that. But he didn't know either," the Madrid coach said.

The goal all but ended Atletico's hopes of advancing, and the second half was played at a much calmer pace, with few significant scoring opportunities for both teams.

"This performance was the least that we could have done," Atletico captain Gabi said. "I thought we were excellent in the first half. A moment of genius from Benzema ended our dream but we never stopped fighting and I'm proud of everyone."

Navas had to make a fine double-save in the 66th minute to block a shot by Yannick Carrasco and a header by Kevin Gameiro, while Cristiano Ronaldo had a goal disallowed for offside at the other end in the 69th.

Before the game, Atletico fans displayed huge banners that read, "proud not to be like you," a response to Madrid's message before the first leg.

The banners at the Bernabeu last week read "tell me how it feels," along with an image of the Champions League trophy and the words "Milan" and "Lisbon," the cities which hosted the finals where Madrid defeated Atletico in 2014 and 2016.

Atletico was upset by the banners and provoked Madrid in the run-up to the second leg. The club sent a series of tweets that praised its fans for having unconditional love for the team despite the results, accompanied by the hashtag "they can't understand."

The Atletico crowd stayed on to cheer their team long after the final whistle, while the players returned from the changing rooms several minutes after the game to greet the fans. Simeone was loudly cheered. He was still asking for the crowd's support in second-half stoppage time.

Madrid players also returned to thanks their own supporters, and many Atletico fans threw objects toward them.

It was the final European game at the Calderon before Atletico moves into a new venue next season.

MADRID, Sept 13: Real Madrid is relying on the successful formula of a year ago as it attempts to become... Read More...