Wales progress into quarterfinals at Euro 2016 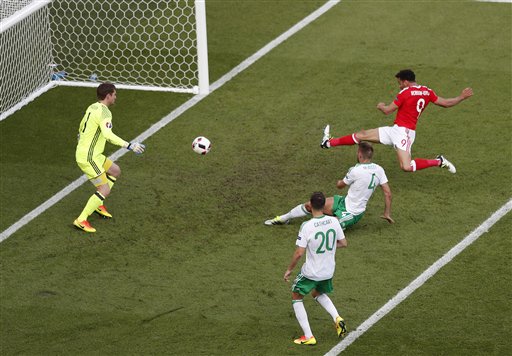 PARIS, June 25: It's largely thanks to Bale that the first tournament appearance by Wales in 58 years is going to last at least another week after a cagey 1-0 win over British rival Northern Ireland on Saturday put the Welsh in the quarterfinals.

There was no fourth goal of Euro 2016 for Bale, but his contribution for the game's only score — a Northern Ireland own-goal — was invaluable.

The forward whipped in a cross in the 75th minute that was aimed at teammate Hal Robson-Kanu, but it was inadvertently turned into the net by Northern Ireland defender Gareth McAuley.

"We knew it was going to be a difficult game for the attacks especially to get space," Bale said. "But the team as a whole worked incredibly well and we spoke before the game about moving the ball, making them tired and ultimately they would make mistakes.
"We had the one moment of quality and forced them into a mistake and that won us the game."

The Welsh will surely have to pose more of an attacking danger against either Hungary or Belgium in the quarterfinals in Lille on Friday.

It will be the first time Wales will contest a quarterfinal match since the 1958 World Cup.

"We have turned up and we have shown our team spirit, our passion," Bale said. "We just have to keep riding this wave."

For much of Saturday's game, Northern Ireland successfully nullified Bale. The only goal threat by the Welsh before the slightly fortuitous breakthrough came from a free kick from the world's most expensive player and the tournament's co-leading scorer with three goals.

Instead, it was the Northern Irish looking more likely to break the drab deadlock in the first half of their first major tournament since the 1986 World Cup.

The teams looked like the first-time European tournament finalists they are, with little quality in an encounter more suited to the lower leagues of English soccer.

But Northern Ireland, which won plaudits for frustrating Germany in a 1-0 loss to the world champions earlier this week, certainly made the Welsh work hard for their first-ever tournament knockout stage win.

"It's devastating really," Northern Ireland coach Michael O'Neill said. "To lose as we did, the nature of the goal is very disappointing."

4.4 million doses of Vero Cell vaccines arrive in Nepal on Friday
6 minutes ago