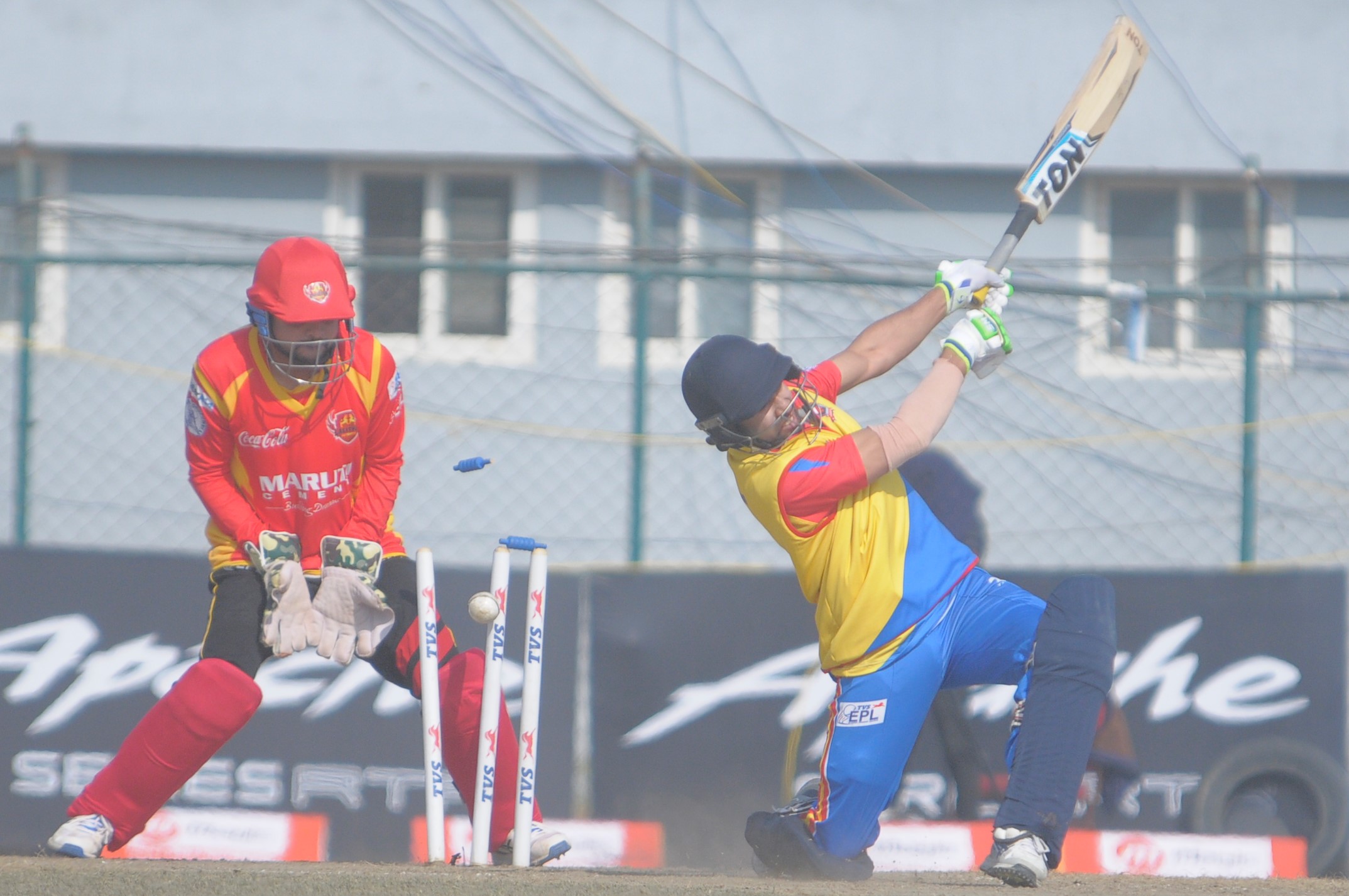 Sharad’s team
Sharad Vesawkar is most successful captain in the history of Nepali premier league cricket. He has won two and was defeated by Paras Khadka led Team Chauraha in his third final. In the ongoing tournament, Sharad’s team looked on the weaker side in comparison to other teams on paper. They were also the last team to submit the list of their foreign players. But the way Sharad has evolved as a captain he seems to instill belief and confidence in whatever set of players he is provided with. Asking Hari Shankar Shah to bowl in powerplay against Kathmandu Kings XI and today opening with Dipesh Shrestha and Krishna Karki. In fact, no spinners were used up until 7 overs against Lalitpur Patriots. Later on, we saw how Rohit Poudel (more on him later) played one of the most amazing innings in our recent memory in Nepali cricket. Sharad Vesawkar is not only a captain who thinks on his feet and responds according to the situations but also a shrewd leader who somehow manages the youngsters to bring best out of them.

When Malla challenged Airee
Pradeep Airee was given nick-name of ‘Boom Boom Airee’ for his exploits as an opener. He was also on the national team two years ago which started the WCLC in Scotland. Since then his stakes has fallen down. Even playing an opening for Sharad’s team has not helped him. While chasing the target set by Lalitpur, Gyanendra Malla had three slips and a third man for Pradeep Airee. Lalitpur skipper was inviting Airee to go for his shots which never happened. Just like in the previous match, Airee struggled to get going and was dismissed LBW off Yogesh Nagar playing 11 deliveries and only hitting one run. He now has only two runs in 22 deliveries in two matches. Talk about reading the situation and player by the veteran of the game Gyanendra Malla.

The desperation of Yogesh Nagar
The Delhi batsman was trying to muscle every ball out of the ground but thanks to the slowness of the pitch he was struggling to connect it as he would have liked. He hadn’t done much wrong, in fact, ended up scoring his first fifty of the tournament, but this innings could have been much better than it is now. He may not be the best batsman in the tournament but he sure looked in monstrous touch to score big hits at will only succumbing to poor timing due to two-paced pitch. Be it spinners or pace bowlers, he kept smacking them but couldn’t find the right timing. He still got three fours and a six. At the press conference, Malla did agree that pitch is a bit two-paced in the morning, gets better at the afternoon, then again cracks up at the evening. The pitch is not helping batsmen in this EPL for sure.

Rohit puts up a class for Alam
Most of us still remember how Mehboob Alam struggled to clear the fences when Lalitpur lost a close match against Biratnagar Warriors. A Mehboob Alam of old would not have but times have changed. The baton has to be passed. Lalitpur’s third game this morning had similar finish when Mehboob Alam found himself again in the middle of all the action. Rohit Poudel smashed four, six and a four in consecutive deliveries to send Bhairahwa Gladiators home in another cliff-hanger of a match. Lalitpur looked home at one stage when Rohit missed an attempted scoop shot against Alam. Rohit yelled in despair. Next ball smashes it over long off for a six and holds a pose for the photographers. He followed with two fours and eventually sealed the match for Gladiators.

Fighter Farveez
Maharoof has been criticized for not using Sagar Pun and Sompal Kami appropriately in last two matches as they lost both. Come day four of EPL, starting from the toss, Maharoof was vocal about changing his strategies in the match. He opened the bowling with Sagar Pun, he responded with one wicket and three catches standing at short mid-off and mid-on. Pun used to be deployed at the boundary in previous matches. The only wicket he took was also caught off his own bowling. He also promoted Sompal Kami at number 5. Didn’t work as he was dismissed run out bit intent was there. The more natural number for him in domestic cricket, anyway. Similarly, he was seen hobbling on the field, holding his leg every time he had to field a ball. He also bowled with a reduced run-up, so much that it was less than when he measured his run up in the last match. Despite all that, he stayed on the field for full 20 overs, completed his full quota of overs and picked up three wickets including that of Dipendra Singh Airee, Praveen Gupta, and Anil Mandal. He later promoted himself to bat at number three and scored 39 runs including three sixes. Sure he has not been at his best with his captaincy or fitness or form, but he sure is fighting with everything he has left in him. He chuckled when he said he is getting old in the post-match presentation.

Mandatory Amit Shrestha Talking Point
Yes, another day, and another cameo by Amit Shrestha. The tournament is still fresh but this lad from the eastern part of Nepal is already leading the run charts of EPL 2017 without even hitting a single fifty. He is an enormous talent with shots all around the ground. He definitely is match fit all he needs is to convert those starts to big innings. There aren’t many batsmen in Nepal who are as confident as Amit while opening the innings. He looks home at that position. He needs to show the hunger for long innings and prove his further fitness.

Dipendra Airee’s Paras Khadka touch
Dipendra Sing Airee has so many things common with Nepal cricket’s current skipper Paras Khadka. They both are captaining their side in EPL. They both have the best record in batting at number four. They both can bowl seam ups in required and spin if the situation arises. It doesn’t end there. In today’s 2nd match of the day, towards the end overs, Dipendra Airee took the ball and decided to bowl the penultimate over of the match. They didn’t have much to defend with only 9 runs in hand with 12 deliveries to go. He dismissed the Kings XI batsman Raju Rijal and had conceded only 3 runs up until the last ball of the over which was dispatched to four by Sri Lankan Akshu Fernando. He almost gave an outside chance to win the match for Chitwan. Airee has that knack for making crucial contributions when the team needs it most just like Paras Khadka. This sure is good news for Nepal cricket.

President did not follow rules and procedures: General Secy Gurung
19 minutes ago