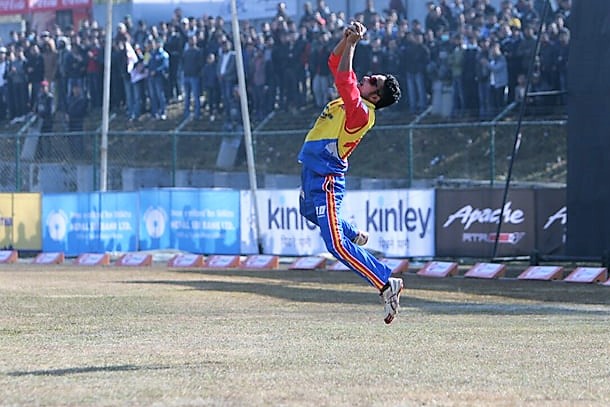 Biratnagar Warriors is a dream Nepal team
Paras Khadka is leading the team. Basant Regmi is your main spinner. Sahan Adeesha is spearheading the pace department similar to Sompal Kami along with Avinash Karn and Karan KC. Anil Sah is your newcomer in the team. And Aasif probably is your second option to be wicket-keeper in the team if not Dilip Nath. These all sounds very similar to Nepal’s national team. The two places that the national team struggle is Sagar Pun, opening the batting, and Binod Bhandari, as a finisher, in the middle overs. Anshuman Rath and Babar Hayat plug that holes. This is something Paras Khadka as a captain, fans and experts want national team to be. Paras’ captaincy looks ten folds better than his recent struggles in national colors. Biratnagar is everything Nepal fans’ want in their national team.

The crazy crowd for domestic tournament
A crowd of thousands making the sounds of  ‘oohs’ and ‘aahs’ in the same chorus is the pinnacle of every sports ground or stadium. This happened on TU ground today. The crowd was clapping every shot played by Dipendra Airee and Praveen Gupta during the end overs of their chase. People came to see Rath and Hayat in the morning; they stayed and enjoyed the treat of a partnership that was Airee and Gupta at the evening. Yes, the public holiday helped but the love of cricket in Nepal is something one would not argue with. There is every chance the house will be full for the final which also happens on Saturday.

Just Binod Das things
A Nepali cricket follower needs no introduction of Binod Das. His contributions for Nepali cricket as a player and now as a coach are immense. As a player, a captain, a coach, and director of cricket, peoples have seen him in defining roles for Nepali cricket but it doesn’t end there. He is also a very successful Tournament Director hosting stuffs like EPL. He now has taken a new role altogether of a commentator. One shouldn’t be surprised if he is so good at it. The in-depth knowledge of the game, the experience, stories and the professionalism is the best that has ever seen in Nepali cricket's live broadcasting. So, the question rise, is there anything Binod Das can't do?

Biratnagar Warriors breaks another record
Biratnagar Warriors has become first team to win the 9:00 AM match after batting first. Pokhara, Lalitpur, Chitwan, and Kathmandu, had all lost their respective 9:00 matches after they were asked to bat first. Biratnagar has finally broken that pattern. They look unbeatable. In another match of the day, Lalitpur Patriots became the first team to lose two matches after winning the toss. They batted first in one match and chased in the other. They lost both matches. Today, they won the toss and elected to bat first against Chitwan and lost the match by 5 wickets. This was Chitwan’s first win the tournament.

The curious case of Pawan Sarraf
First up, Pawan was/is a bowling all-rounder who was asked to bat for Lalitpur Patriots. In fact, he opened the innings for Lalitpur. He responded with a fifty but was dropped in the fourth match. He was replaced by Shankar Rana, who himself had a miserable time in the middle struggling for 37 deliveries and scoring 27 runs. There has been no official confirmation if he is injured. Sarraf is one of the most rapidly improving youngsters who could have contributed easily with bat and ball. He is also someone who is very sharp in the field.

Best catching day
EPL hasn’t been great in fielding standards. Misfield and drop catch can be seen almost every day. But today it was different. There were three great catches that should make the highlight reel for the best catches in EPL 2017. Bhuwan Karki picked a blinder to dismiss Paras Khadka with both feet above the ground when he completed the catch at deep mid-off region. Anil Kumar Sah the youngster, arguably, pulled off the catch of the season when he dived on his wrong side to hold onto a ripper of a catch. Praveen Gupta also managed a one-handed worldie at the short third man to dismiss Lalitpur batsman. In all three cases, the ball was traveling. The boundary looked imminent. But the fielders timed their jump to perfection to complete all the catches. Sure the fielding is not up to the mark in EPL 2017 but they had their moments. And it has been brilliant ones.

Plenty of records were broken in the match between Chitwan Tigers and Biratnagar Warriors. Tigers were at the receiving end... Read More...