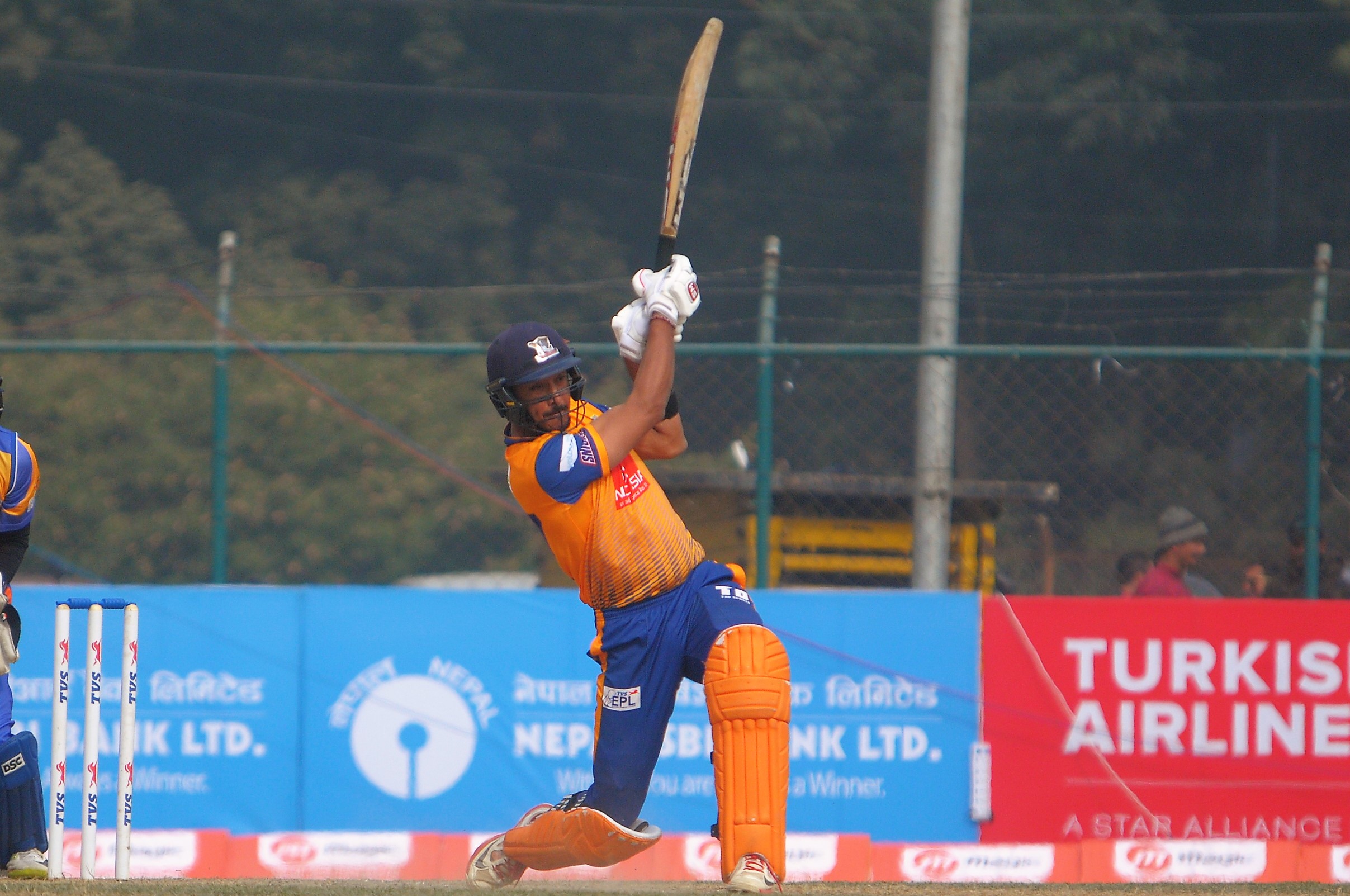 Records galore in Warriors vs Tigers
Plenty of records were broken in the match between Biratnagar Warriors and Chitwan Tigers. Tigers were at the receiving end of most of them. Ten records that were made in that match are:

How strong is Biratnagar Warriors
-Aasif Sheikh is the only player to have a century in Everest Premier League. He achieved that feat in final last year. He recently smashed Bangladesh U-19 bowlers to score the fastest half-century for a Nepali player as an opener.
-Anshuman Rath is a Middlesex contracted left-handed Hong Kong opening batsman who topped the ICC WCLC run-scoring charts.
-Babar Hayat is one of the most aggressive batsmen in the current Associate scenario. He just completed his maiden double century in the Intercontinental Cup.
-Paras Khadka is a synonym to Nepali cricket. The biggest match-winner Nepal ever produced.
-Basant Regmi is one of, if not the, best spinner to ever emerge in Associate cricket.
-Sahan Adeesha is easily among the fastest pace spearheads in the tournament.
-Anil Sah is rapidly growing youngster in Nepal. He recently made it to National camp. He had scored fifty against Afghanistan U-19 team who were crowned champions of Asia.
-Karan KC, Pushpa Thapa, and Avinash Karn have some reputation too.

I leave it to you.

The team winning the toss at 9:00 AM matches has 100% win record. And except against Biratnagar, all the teams chasing have won their respective match.

Bottomline: The toss has been a deciding factor in this tournament.


The problem with Nepali batting
After struggling his way through to 28 deliveries, Raju Rijal decided to step out, for no apparent reasons, I can’t even say if there was enough intent to hit the delivery out of the park, he was stumped, quite comfortably, only scoring 17 runs, in a T20 match, a score not even acceptable for F50 (one-day) cricket. In the 10th over Kathmandu Kings XI was 37/3. Sagar Pun struggling at the other end wasn’t helping either. There needs to be certain technique or strategy in such conditions. But it can’t be seen from batsmen like Raju Rijal or Sagar Pun, not today for sure. Merely surviving at the crease is not going to serve your team well in T20 cricket when there are other capable batsmen in the team. If a batsman can play 28 deliveries at the crease one expects him to at least carry-on and cover his earlier dot balls by ending his innings by at least run-a-ball. Struggling, playing dot balls, not getting the boundaries often will only put your team in more trouble with all the unnecessary pressure comes from such batting. There are no such things as settling in a certain kind of pitch with Nepali batsmen. Acclimatizing the conditions and making your innings work in response to the pitch can’t be seen. Even for someone like Sagar Pun who is an experienced bloke played almost 20 overs and 45 deliveries but he was still struggling to clear the inner circle of a short loose delivery by the pacer.

The urge to step out in this slow pitch
Sunil Dhamala was playing very calculated innings. Pokhara looked all good to win another match by 10 wickets given how assured Israrullah once again was on the pitch. Dhamala had just scored six just a couple of deliveries ago simply from his stance. But all of a sudden he had this urge to step out and hit Sagar Pun for another six. This time he tried an ugly hoick over long on area. In a pitch that is too slow to even think about playing early, Dhamala stepped out. He lost his composure, missed it completely and lost his stumps to Sagar Pun. He was clean-bowled. An opening was provided to Kings XI to come back in the match.

Basant Regmi for Yo-Yo test
The Crisis-Man bowled well today. He picked up four wickets. He did his job. But is that it. Most will remember how he missed two catches in same over of Sahan Adeesha. The Sri Lankan bowler was livid. Sahan couldn’t believe his eyes and constantly looked at his skipper Paras Khadka on how Regmi could drop two catches in same over. The first one of which was a straightforward catch but the later one was a bit difficult which Regmi did well to reach for the catch and dived but spilled it when he hit the ground. Just couldn’t control his momentum. We all know how Regmi is struggling for fitness from some time now, T20 tests him. Whilst, the world is looking for yo-yo test first and form a second criterion for selection of national players, I wonder if Nepal or any associate nation can have that luxury to do that in current context and scenario. Nevertheless, fitness is going to be crucial in rapidly evolving modern cricket demands.

Avinash Karn loading
A starlet who was lost in the shuffle due to injuries is back again. It is not about how well he bowled today picking up two wickets but the way he appears has changed dynamically in this year’s EPL. He is no more the sissy teenager but a well-built guy with proper height for a fast bowler, at least in Nepal’s context. For a moment, I was pleasantly surprised to miss read him as Sahan Adeesha in the field. He looks every bit fiery fast bowler we always thought him to be. He just might be the left-hand bowler who can deliver match winnings spells for Nepal in the international arena which he promised to be when he first came in the reckoning. He is a little low on pace but that can be worked. The prodigal son has returned.

One can predict the playing XI and batting order for Warriors tomorrow but it can't be said same for Gladiators.... Read More...

The Everest Premier League’s second season is underway promising to be more exciting and entertaining than previous one. The opening... Read More...