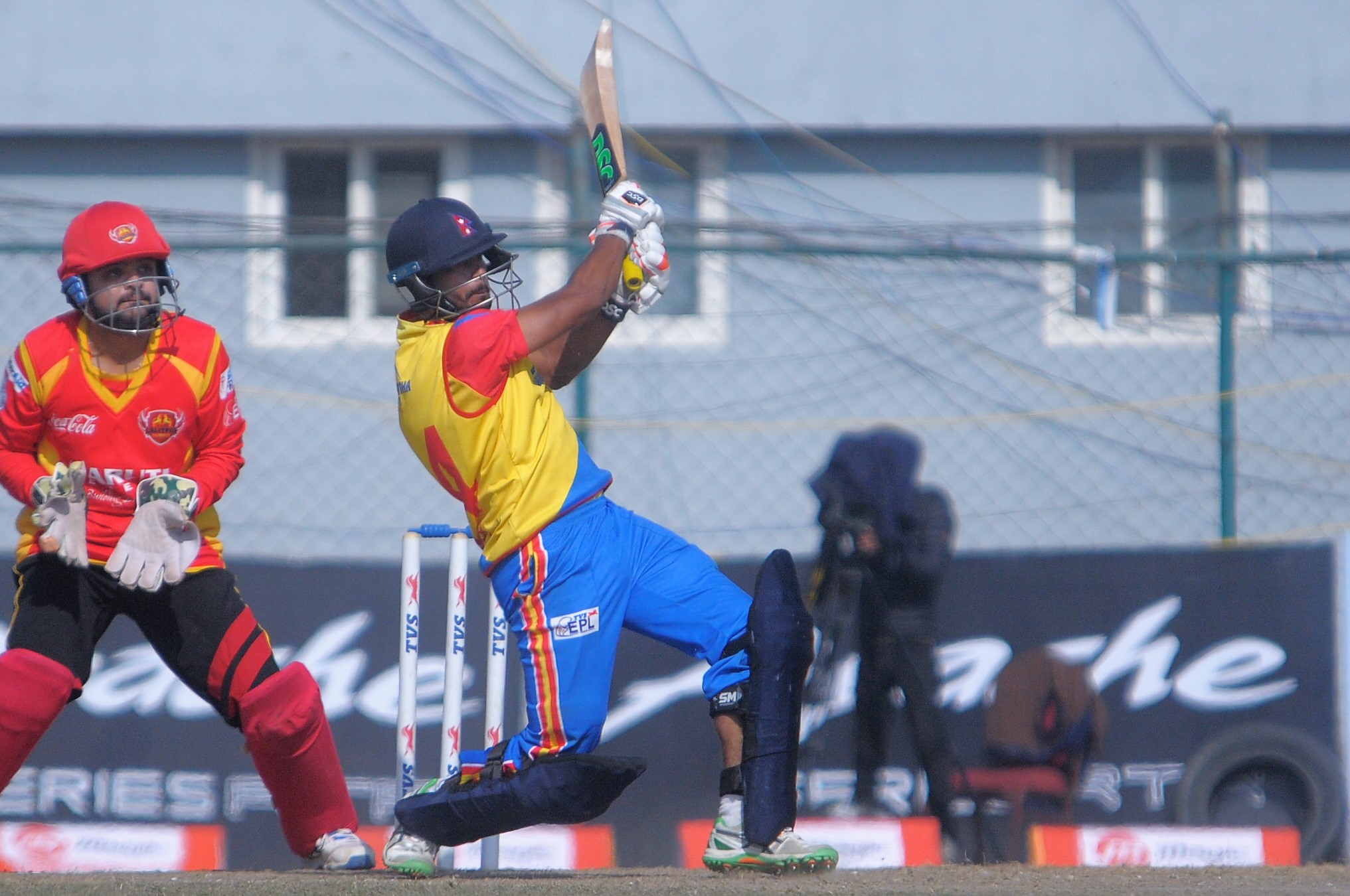 The contests within contest
Conqueror Hayat: Sagar Pun is a skillful bowler. Most times than not he does the job for his captain. If not picking wickets he delivers economical overs. However, in his only over of the match for Kathmandu Kings XI against Biratnagar Warriors, Babar Hayat hit him for two sixes. He came round the wicket and bowled a couple of short pitch deliveries which was comfortably put away for sixes in the legside by the man in ultimate form Babar Hayat.

Max’s moments: Jeetendra Mukhiya is known for delivering Yorkers. However, he has been more on the shorter side in this tournament. He delivered an over of short-pitch stuff to Paras Khadka. The Biratnagar Warriors captain struggled to time the ball. In next Mukhiya over, he smacked him for a six off a full-pitch delivery. For some reasons, Mukhiya reverted to successful short stuff to Yorker length deliveries. Khadka was finally dismissed by Sompal Kami after he went for a pull, but the ball stayed low, from just short of length and he lost his stumps.

Sagar’s weak spot: Paras Khadka has played with Sagar Pun for many years. He will know where to bowl at Sagar Pun. The Kathmandu Kings XI opener doesn’t have the best wrists to maneuver deliveries for singles. Khadka knew his weak spot. He delivered a quicker one at his legs. Sagar Pun was caught and bowled subsequently.

The Siddhant Lohani Factor
The Kings XI batsman achieved more in his short stay against Biratnagar Warriors that Binod Bhandari couldn’t in his any recent outings. The crowd was with Lohani when he scored two at the end of the improbable chase against Warriors. He had Warriors on toes. There was every possibility that he could have made Kings XI first team to defeat Warriors in the tournament. The pressure was so much that the bowler Ram Naresh Giri even bowled a wide bringing the equation down to 11 runs in 3 balls at the end. He was caught at long-on boundary in the very next delivery. Even Paras Khadka accepted in the post-match press conference that Lohani relishes this kind of situations and Warriors could only breathe a sigh of relief after seeing his back.

Dhamala dazzles
Sunil Dhamala’s first shot of the day was a perfectly timed square drive. He picked up three runs from that. He looks calm and composed at the crease. Sure, having an experienced senior like Israrullah at the other end has helped. He looks a different batsman altogether from his days when he represented Nepal. He, in fact, outplayed Israr in first two overs of the match. Connecting every ball and timing them brilliantly. He managed a straight drive boundary against Dipesh Shrestha, arguably the best Nepali pace bowler of the tournament so far. It is not always about runs or strike rates. Sometimes, intent and application should be rewarded too.

Glorious Gladiators
One can say Sharad Vesawkar has that Midas touch. Everything he touches to turns into gold. He called up seven different bowlers against Pokhara Rhinos in their match today which was a must-win encounter to secure a place in playoffs or even qualifier first. Each one of them picked up a wicket. Pratham Salunke, Sharad Vesawkar, Puneet Mehera, Aarif Sheikh, Dipesh Shrestha, Hari Shankar Shah and Krishna Karki all picked up at least a wicket each in the match. Bhuvan Karki didn’t even bowl today. This might be some kind of record in EPL itself. Similarly, they continue to punch above their weight as they are the second team to reach the playoffs ahead of much stronger (on paper) Pokhara Rhinos or Lalitpur Patriots side.

India versus Pakistan: Episode 1
Rhinos Pakistani fast bowler Taaj Wali clean bowled Gladiators’ Indian opening batsman Pratham Salunke. But only after Salunke had dispatched Sob for 5 fours in an innings. Taaj celebrated aggressively in his face and may have uttered some not so pleasing words (which cannot be confirmed from Media box view). Pratham marched towards him to have a word only to be intervened by the umpire. Things got heated between the two players from India and Pakistan.

Affable Aarif
The low target did help but it required a level of performance from both Sharad Vesawkar and Aarif Sheikh to negotiate the most successful bowling attack of Everest Premier League 2017. Aarif Sheikh came to bat when Pokhara had ample chance to come back in the match and strangulate the match. Both Sharad and Aarif decided to take few overs to calm things down. Sharad is an experienced customer in such kind of situations but the way Aarif constructed his innings speaks volume of maturity level he has attained in recent times. At one point he was on 19 from 31 deliveries. Clearly took his time which was available anyway. But then he simply didn’t throw it which we see with most of Nepal batsman. He scored unbeaten 48 runs and finished with a strike rate of more than 100. He smashed three sixes in the match and three fours. He came, stayed and slew the bowling attack accordingly. He took over the charge from his captain and successfully completed the chase sharing an unbeaten 70 runs partnership with Sharad. It was a matured performance by a youngster who is struggling to hold his place in the national team's playing XI.

Skipper Farveez Maharoof needs to revisit his strategies if Kings XI has any chance of coming back in the tournament... Read More...

The Everest Premier League’s second season is underway promising to be more exciting and entertaining than previous one. The opening... Read More...

Myagdi district is self-sufficient in oxygen
17 hours ago