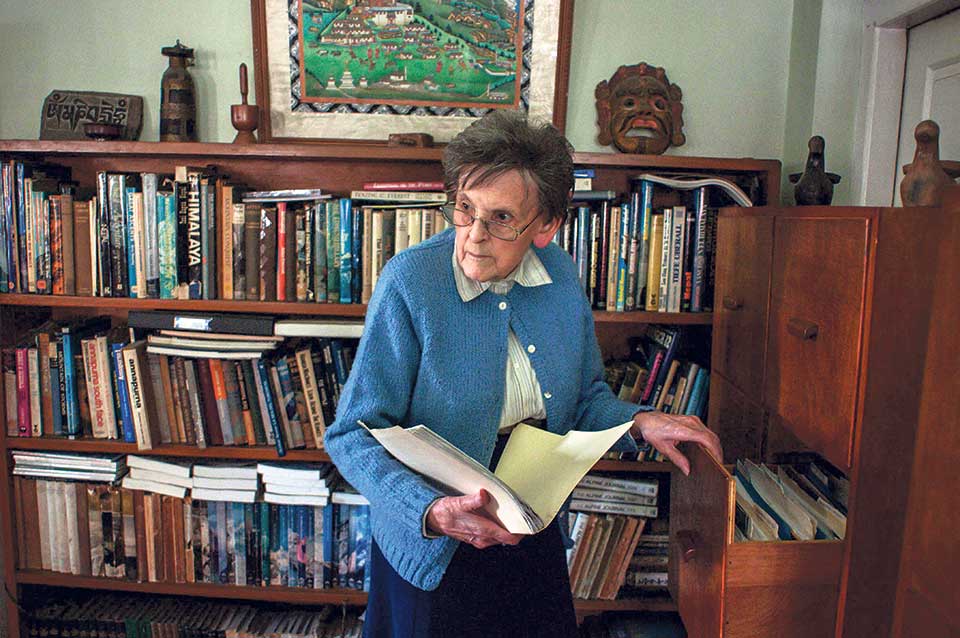 In this photograph taken on May 9, 2014, US journalist and Kathmandu-based mountaineering expert Elizabeth Hawley holds files as she speaks during an interview with AFP in Kathmandu. American journalist Elizabeth Hawley, whose fifty years chronicling summits and tragedies in the Himalayas earned her the moniker ‘the Sherlock Holmes of the mountaineering world’, died January 26 aged 94. Hawley built a reputation as one of the most authoritative voices on Himalayan mountaineering after moving to Nepal in 1959 as a journalist, where she continued to live up to her death. Photo: AFP Files/Rss

KATHMANDU, Jan 27: Elizabeth Hawley, a noted expert of mountain expeditions, passed away in Kathmandu at 2:30 am on Friday.

She died at CIWEC Clinic Travel Medicine Center in Kathmandu, where she was admitted last week. She was 94 and was suffering from pneumonia.

Hawley is best remembered for chronicling mountain expeditions in Nepal. The US-born journalist had first come to Nepal in 1960 to cover the then King Mahendra’s coronation for Fortune magazine. She later made Nepal her second home and lived here till her last breath.

Leaving her home and job in the US, Hawley started working for Reuters as a correspondent from Nepal in 1962. During those days she reported on Everest expeditions, for which she had to meet all the climbers and interview them for details of their mountaineering experience.

While reporting for Everest expedition, she eventually compiled a huge record of all the details of climbers.

She interviewed all the teams before and after they climbed the mountain, recalled Jeevan Shrestha, one of the members of The Himalayan Database team. The Himalayan Database is a compilation of records of all expedition teams that climb Nepal’s mountains. “She compiled all the details of mountaineers, such as their experience of climbing, their successful summits and attempts, failures and all other tiny details,” Shrestha recalled. “She started working on Himalayan database when nobody had even thought of keeping record of mountains.”

Working with Hawley for the last two decades, Shrestha said that she was the only one who kept all the information related to mountain expedition. “We didn’t have Google or any other medium to obtain such information,” Shrestha said. “So for those who wanted to know about Nepal’s mountains and mountaineers, she was like the Google.”

However, as time passed, expedition activities increased. So, she hired assistants to help her. “I started working with her since 1997 and since then I have witnessed how hard she worked to keep the records,” Shrestha added.

Nobody had assigned her for this work. However, she became a living resource with such huge archive of mountaineering facts, Shrestha added. “She had never stepped on a mountain, but she became a legend of Nepali mountains,” Shrestha told Republica.

Hawley retired from her self-assigned work in 2016 when she became physically weak.

“I have always admired her for being an inspiration. And we will give our best to continue the work she had begun six decades ago for mountain tourism,” Shrestha said.

According to Ang Tshering Sherpa, former president of Nepal Mountaineering Association, Hawley was the only mountain expert in Nepal after Harka Bahadur Gurung. “I first met her in 1969 when I had just passed SLC exam,’ Sherpa recalled. “She used to inspire us to work on mountain tourism in Nepal.” “It’s been 43 years that I am working on mountain tourism, and she is my inspiration,” Sherpa added.

Hawley’s family members will arrive in Kathmandu on Saturday.

It is still uncertain where her funeral will take place. “Her death has greatly affected the entire mountaineering sector of Nepal,” Sherpa said.

In recognition of her contribution for Nepal’s mountain tourism, the Government of Nepal had named a mountain after her -- Peak Hawley --
in 2011.

India, 'pharmacy of the world', starts COVID vaccine shipments to neighbours
8 hours ago
Govt prepares to inoculate health and sanitation workers in the first phase
19 hours ago

Advocates asked to present their arguments within half an hour
13 hours ago
Nepali Congress to organize protest programs in all 6,743 wards against House dissolution on Thursday
9 hours ago