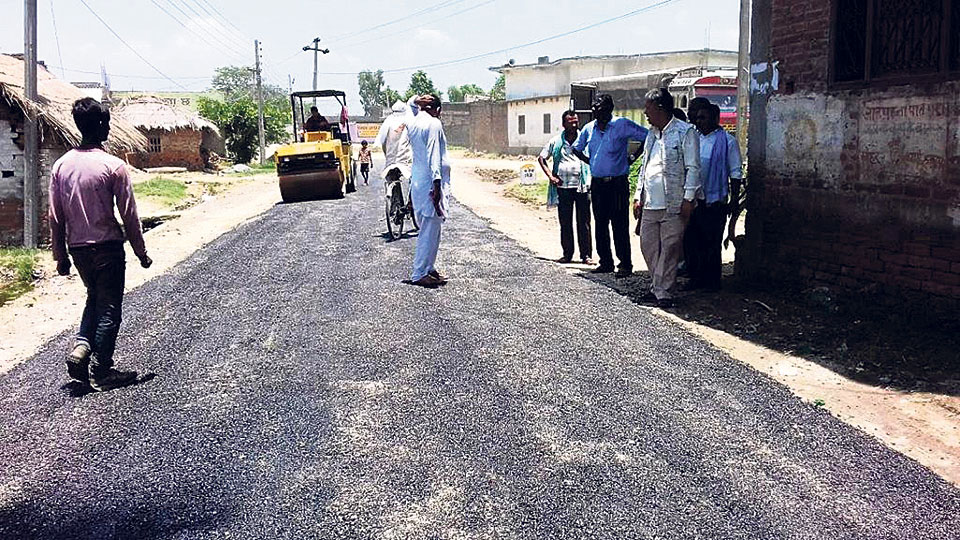 BARA, June 28: Ibrahim Miya describes himself as a person who is not much interested in politics but says that he tries his best to cast his vote, when the elections come around. “If you elect the right people to power, most of the time they will do the right things”, he believes. Sticking to his long-held belief, during the local level elections he cast his vote. Nearly after a year the local government came into being, Miya feels that he was cast his vote in favor of the right candidate. Thanks to the fast changing face of the towns and villages in his district, Miya is elated and hopeful of seeing more developments in the district in the days ahead.

“I do not know about the development made in other parts of the country. But, I have heard that people are not happy. But here it is not the case,” he stated. A resident of the Kalaiya Sub-Metropolitan City, he added that most of the road tracks in villages and towns have been graveled and blacktopped. Similarly, new community buildings, proper sewages, electric pole, drinking water systems are either repaired or newly constructed.

Miya is not exaggerating. The local government has indeed delivered tangible results. Investing the budget meant for physical infrastructure the government has brought about changes in almost all of the 28 wards of the sub-metro.

“We were so much fed up with the poor conditions of the road and sewage systems that when they came asking for votes during the elections, we had only asked them to fix them. We had made it clear to them that the first things we want in our area are good roads,” narrates Miya. “Since, it is a tradition among the elected leaders to disappear after the elections, we were not sure if they would keep their promise. Accessing the results now, I can tell you confidently that they kept their promises,” he added.

The sub-metropolitan has been constructing new roads and repairing existing roads as part of its Town and Ward Level Development Project. It has invested around Rs 4 million alone in Basantpur for developing various infrastructures.

Miya shared that he felt districts like Bara and Rautahat in Tarai region had been historically neglected even though the country got several new governments. Despite political changes, poor people in rural areas of these districts were not to get respite. “However, we are seeing some real changes in our community and city.  We are very happy that roads have been repaired and black topped. Along with that much needed physical infrastructures are now in place,” he said. “Monsoon did not scare us as much as it did in the past. We have nice roads. Earlier, it would be extremely pathetic to commute during the monsoon,” he added.

According to the office of the sub metropolis, there are many more projects in the pipeline. Projects scheduled to complete within the past year, have now completed, it said. “There were priority projects which we were working on. Not they are completed. Our first priority was to provide immediate relief to the neediest people,” explained Rajesh Raya Yadav, mayor of the sub metropolis.

He claimed that governments in the last five decades did not do the tasks that his team accomplished in the past year. “In the last few decades, people only fought for changes, no development was ever done,” said Yadav. “This has indeed given relief to people, they have seen new changes, they are really sensing that something good is happening,” he added.

The sub metropolis has boasted of gaining ‘magical’ changes and shared commitment to continue doing so in the years ahead. Mayor Yadav terms it as ‘sensible, smart development’.

“It needs both will and idea to bring changes, we are doing our best,” he said.

According to Yadav, Rs 350 million rupees have already been spent for physical infrastructure this fiscal year. Such an amount of budget was not allocated for development in the local level in the past, he said.

Yadav further said that long and short-term projects on road, sewage and drinking water systems and other facilities are presently underway. He added that his office would increase funding for such projects after accessing their relevance.

Meanwhile, chief administrative officer at the sub metropolis Tokaraj Panday added that cleanliness, tourism, infrastructures are top most priorities of the governemnt. “We have been trying to make people more and more interested in such activities. Cleanliness is very important, we are planning to start ‘Clean Kalaiya’ drive,” he said.

For the new fiscal year, the sub metropolis has unveiled a budget of Rs 1.1 billion. The budget aims to build new physical infrastructure and systems that would support the development of tourism sector in towns and villages, Panday said.

Bhaktapur voters cry for water with their elected representatives

Elected representatives yet to submit their expenditure detail

SURKHET, July 14: Newly-elected local representatives will not be able to contest for the position of District Coordination Committee if they... Read More...

RAMPUR, June 11: Just like in other local units, four bureaucrats were transferred to Rampur Municipality of Palpa as executive officers... Read More...