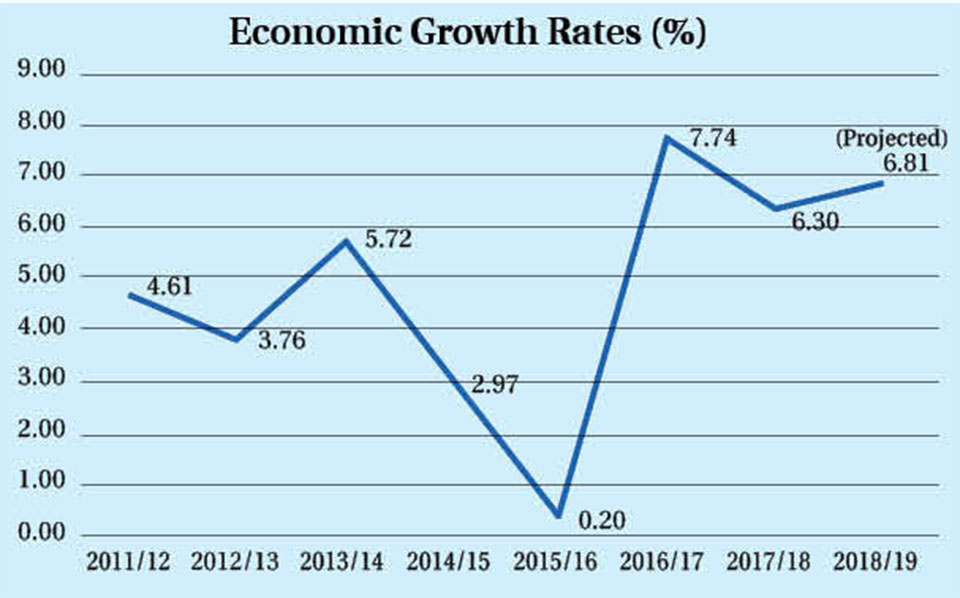 KATHMANDU, April 27: The country's economic output is projected to grow by 6.81 percent in the current fiscal year and reach worth Rs 3,464 billion. This is the third consecutive fiscal year with an economic growth rate of over six percent.

A robust growth in agricultural output, particularly paddy production which grew by nine percent compared to the previous fiscal year, and other crops, contributed to this, according to the Central Bureau of Statistics (CBS), which unveiled its forecast for the current fiscal year on Friday.

Despite these high figures of growth, the economy is still dependent on the secondary sector or service and trade rather than the primary sector including agriculture, mining and manufacturing.

Economists are, however, upbeat about the growth "as it is a positive signal for the economy", which registered an average 4 per cent growth rate for years before 2015.

Economist Keshav Acharya expressed happiness over the projected economic growth rate which has continuously grown by over six percent for the past few years. The largest growth in the gross domestic product (GDP) was 7.74 percent in 2016/17, the year following the earthquake damage of 2015. The government, in its budget and policies and programs, had set a growth rate target of eight percent for the year.

Acharya further explained, “There is a flaw in our economy which creates a situation wherein the growth in the service and trade sector surpasses that in agriculture, manufacturing and mining, or the primary sector."

But economists are still hopeful of a better growth in manufacturing saying that several manufacturing units, including large-scale cement factories, are being established in the country and they will soon start production.

There are also some other positive indicators to note . For example, though the hydropower sector does not have a big share in the GDP, it has been growing continuously, with the growth in the current fiscal year projected to be 12 percent.

CBS Director General Suman Raj Aryal hopes this sector will gain a higher weight in the economic size. Each Nepali is to save Rs 20 out of their each annual Rs 100 earning, according to the statistics of CBS.

The gross domestic savings will increase by 20 percent of the GDP in this fiscal year and it is a very positive indication for the economy, economists say. These savings range from the farmers' produce to deposits in the banks, among others. Such savings were only 17 percent in the previous fiscal year.

Economist Acharya said that higher saving makes the economy self-dependent and that the people's behavior has slowly shifted to savings from consumption only. “This higher saving is a result of low inflation, higher interest rates on deposits in banks and financial institutions and all other savings of the government agencies,” explained Acharya.

KATHMANDU, Nov 12: The Central Bureau of Statistics (CBS) organized an interaction on Monday with experts and sought their suggestions... Read More...

KATHMANDU, April 26: The Central Bureau of Statistics (CBS) has projected the national economy to grow by 6.94 percent for the... Read More...

Hugs and tears punctuated the final taping of 'The Big Bang Theory,' a lovefest for its stars, crew and audience alike.... Read More...