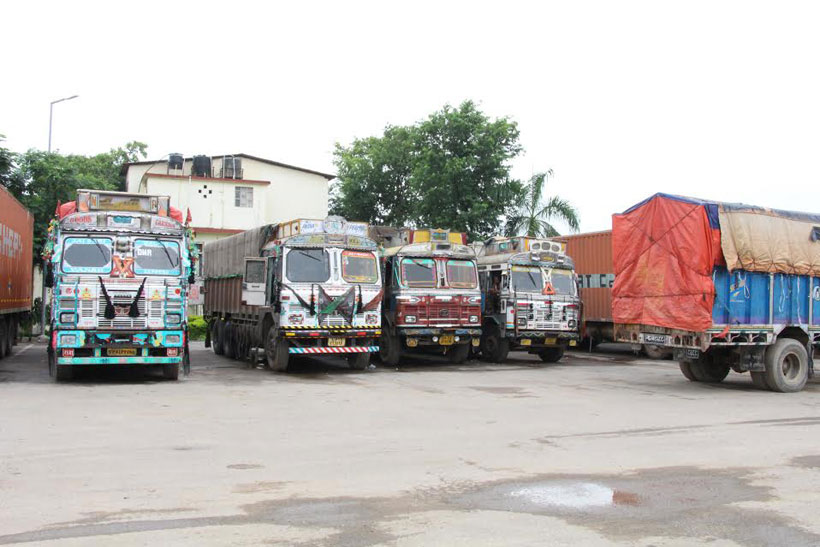 Inland Clearance Depot has made life easier for traders who suffered from disorganized cargo transfers and other hassles
Shahanawaz, 37, from Delhi, India, claims he is more Nepali than Indian. He backs his statement with a smile and shares that he spends more time in Nepal than in India: “I am a truck driver, and I come to Bhairahawa’s Sunauli border four times every year.” His chatty nature makes it easier for him to make new friends during his frequent journeys to Nepal. Fellow Nepali truckers exchange songs with him and joke about his youthful charm. However, the rapport between them was not always this harmonious.

Before 2002, the chaotic conditions at the border post led to confusion, misunderstanding and sometimes irate encounters. “Before, there was no proper parking space for the import trucks. We used to park haphazardly and that created a lot of confusion. We used to fight for parking slots but after the introduction of Inland Clearance Depot (ICD), life has been easier,” says the seasoned driver. He points to the long line of rested trucks from India in the Bhairahawa ICD. More than 80 large, colorful trucks carrying imported goods from India are parked safely in the ICD yard, each truck with an individual identification number.

The drivers submit the required import documents at the customs office and crane the goods from Indian to Nepali trucks. As he unloads the boxes of chocolates from his truck, Shahanawaz says, “The ICD is systematic. They have excellent workers to help truckers lift and transfer goods. Before it used to take 5 to 6 hours to move goods but now it takes less time.” Better drainage, good roads and hygienic environment inside ICD have also created a meaningful difference in the lives of transporters.

Development of ICDs is a key element of the Government of Nepal’s strategy to reduce transport time and logistics costs. Nepal faces among the highest transport costs in the world, severely eroding the competitiveness of Nepali exports and increasing the prices of consumer goods (including imported goods) for Nepali citizens. Given the imbalance between import and export volumes, with the former greatly exceeding the latter, cargo consolidation strategies such as ICDs are important part of the architecture of country’s logistics systems.

The ICDs make life easier for traders who complained about disorganized cargo transfers from India to Nepal, and the hassle of documentation and procedural works. The ICD in Bhairahawa, spread across 28,600 square kilometer, acts as a mediator between the transporters and the customs office. Also known as dry ports these ICDs are properly equipped for handling temporary storage of containerized and general cargo.

Similarly, ICD at Birgunj has helped reduce transit and transport cost of goods moving to and from Nepal. It handles containers, tank wagons for liquid cargo and flat wagons for bilateral break-bulk cargo. “The Birgunj ICD is the only dry port in Nepal that is linked to rail. It has a 12 km rail link to the ICD from the Raxaul railroad near the border with India.

The ICD shed that hosts import good only covers 400 meters of the total 700-meter length of the train. Therefore, the Nepal Government with support from World Bank under the Nepal-India Regional Trade and Transport Project (NIRTTP) is expanding the warehouse to ensure that no goods brought inside the ICD is damaged,” says Rabindra Pokharel, an engineer with the Nepal Intermodal Transport Development Board (NITDB). One of the best features of the ICD is the insurance facility to all the goods, people and equipment in the ICD yard. This method further protects traders from financial damages. The NITDB has instructed the ICD management company to provide best services to the transporters and ensure their safety and security.

The efficient management of ICD in Birgunj has also helped carriers to lessen the cargo exchange time. “Due to lack of infrastructure to host the cargo containers, and inadequate coordination between the customs officers and the traders, the containers used to have more than 20 days of turnaround time. Traders had to pay high demurrage charges to the shipping lines due to delay in returning the containers.

“Now that the ICD facilitates all import and export services, traders do not need to pay hefty rent for the cargo,” says Pokharel. NITDB is also exploring ways to further reduce cargo transport time. It has put in place a corridor monitoring system—capturing cargoes by road and by rail—from Kolkata port to ICD Birgunj to reduce the turnaround time of containers. Similarly, NITDB is also managing ICDs in Biratnagar and Kakarvitta, and in the process of building two additional ICDs in northern borders at Arniko Highway and Rasuwa.

Unfortunately, these best practices of ICDs at the border are yet to materialize in Kathmandu valley, due to various delays. The World Bank Group under NIRTTP has provided support worth US $15.5 million to Ministry of Commerce and Supplies’ Nepal Intermodal Transport Development Board for the development of ICD at Chovar on the way to Daksinkali. However, the bank voiced concern in a recent project status report over the delay in ICD establishment in Kathmandu, even after the completion of the land acquisition of then Himal Cement Factory. The bank report indicates that the ICD component in Kathmandu could be cancelled should the delays persist. Delay in the call for tender and unclear vision of detailed design poses a threat to ICD development. This has frustrated many local transporters.

Absence of parking or warehouse facilities for trucks carrying goods to and from Kathmandu has placed a significant burden on traders, freight forwarders, transporters/truckers, and increasing further time and cost of transport. Furthermore, it has also led to heavy traffic congestion and safety issues on busy arterial roads. Many truckers end up parking on the side of the ring road, which is illegal. They have no option but to take that risk and wait for traders to call them into the city for on-loading and offloading.

“It will take another two or three years to complete the ICD proposed for Kathmandu,” says Hemendra Mohan Shahi, Manager at the NITDB. That is only if there are no further delays in dismantling and clearance of the Himal Cement Factory site. The proposed ICD in Kathmandu will not only support trade transactions but also strengthen the customs system. If the Kathmandu ICD materializes, goods imported from India can be transported directly to customs in Kathmandu, which will be a boon for the local transporters.

The author is a development communicator ayushjoshi4@gmail.com

KATHMANDU, Nov 10: The government has not made any serious efforts for getting exchange facility for demonetized Indian banknotes held by... Read More...