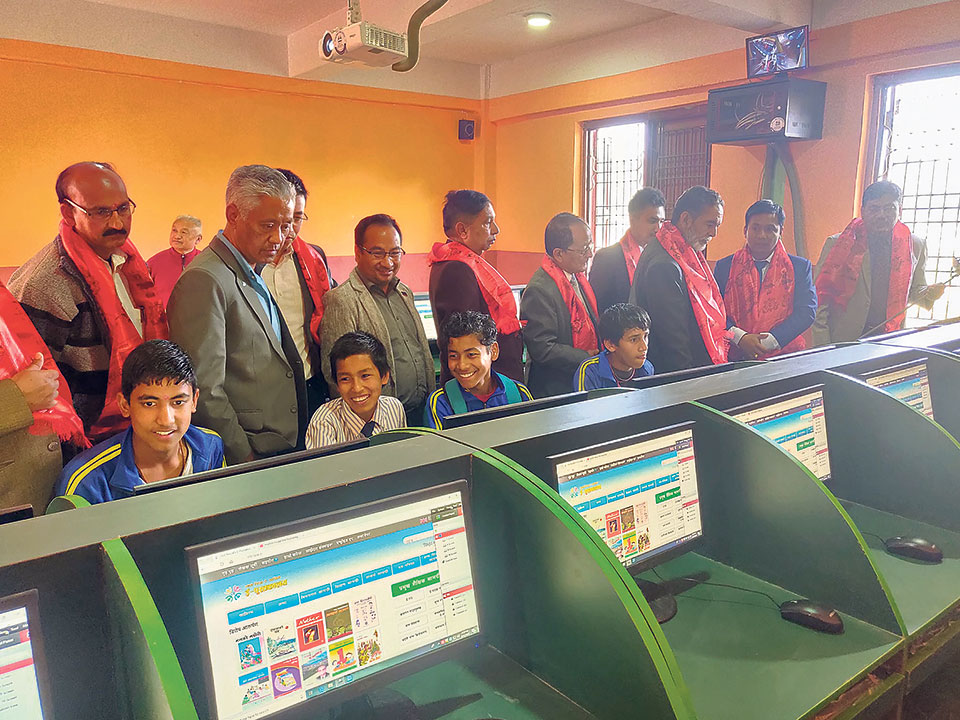 BANEPA, March 26: E-learning is common in private schools. However, it draws headlines when this happens in community schools. There are a very few community schools in the country to offer this facility and schools of Panauti Municipality have recently made into this list. With the support of donors, the municipality has installed computers and other necessary tools in two schools of Banepa while 10 other schools are in the row to go digital.

The first community school in the municipality to have e-learning center for students is the Shree Sharada Secondary School of Panauti – 9. The school has planned to attract more students by advertising the same facility in the new academic session.

“Community schools are struggling to retain their students. We have been losing students to private schools for a very long time. Students are attracted to private schools for various reasons, and e-learning is supposed to be one of them,” said Raghunath Humagain, a teacher in the school. “By availing e-learning facility at our school, we intend to deliver an attractive message to students and their parents,” he added.

Humagain said that the standard of education in the community and private schools is generalized rather than evaluating them individually.  Irrespective of the quality of education, a private school is easily preferred by parents while community schools are not trusted even though their students have been producing excellent results.

“These days, it’s not just about academics. In the digital era, parents make sure that their children are learning modern skills too, and computer literacy has become very important,” he said. “Now, this session, our school has planned to impress students and parents by showing our computer labs.”

The school was ‘top’ choice of residents until a few decades ago. Even a decade earlier it was excessively crowded. In the years that followed, students left for other schools gradually.

“I still remember those days when we had to say sorry to some students due to lack of seats in the class. That was how many students we used to get in those days. But with time, that craze faded,” he said.

Now with the installation of a computer lab, the school hopes to claim back that glory. In the last few weeks alone, a significant number of locals have visited the school to congratulate the school management for the feat.

“To let the parents know about the newly available facility at the school, we advertised the establishment of the computer center. They visited and also observed the computer lab. They seem to have been impressed by the lab and other facilities at the school,” Humagain said.

Some NGOs had provided the school with computers even in the past. But unlike now, it did not have a dedicated e-learning center established at the time.

“We had received computers even earlier. But those were not sufficient. This time, it’s a different thing,” Humagain said.

Rotary Club of Panauti also has a role in persuading the schools to have e-learning centers. The club has helped in installing projector, furniture, internet and other facilities in those schools.

“There is a difference between just having a computer and having a proper e-learning center. Several bodies have helped in making this happen,” Humagain noted.

The school now has 30 sets of new computers, two sets of hi-tech servers, CCTV, e-library software and 50 sets of furniture at its e-learning center.

According to Tirthaman Shakya, former Chief Secretary and president of Literacy Mission of Rotary Nepal, vocational human resource is essential in this age. E-learning centers in community schools can provide great learning opportunities even to children from a humble economic background. “And their skills ultimately benefit the country,” he said. He added that not just students but also every teacher must be given IT training.

“Our schools must be changed into ‘smart schools’. This will happen once all teachers and students get IT training,” he stated.

Meanwhile, Neupane said that several other programs and projects are on the way to improve the quality education provided the schools of the municipality. Within a few years, the results will be visible, he claimed.

“Lack of monitoring of school activities was the main reason behind the poor performance of community schools. That will happen no more. We are developing a system that allows us to monitor the school activities right from our office,” he said.

Neupane stated that his office is also open to discussing problems schools are undergoing. All possible help will be provided to the schools.

“The only thing is, schools should give good results. We are ready to support them and avail all the resources possible,” Neupane said adding that the ‘lazy’ mentality of teachers in community schools will no more be tolerated.

Schools and airport shut in Bara due to cold weather