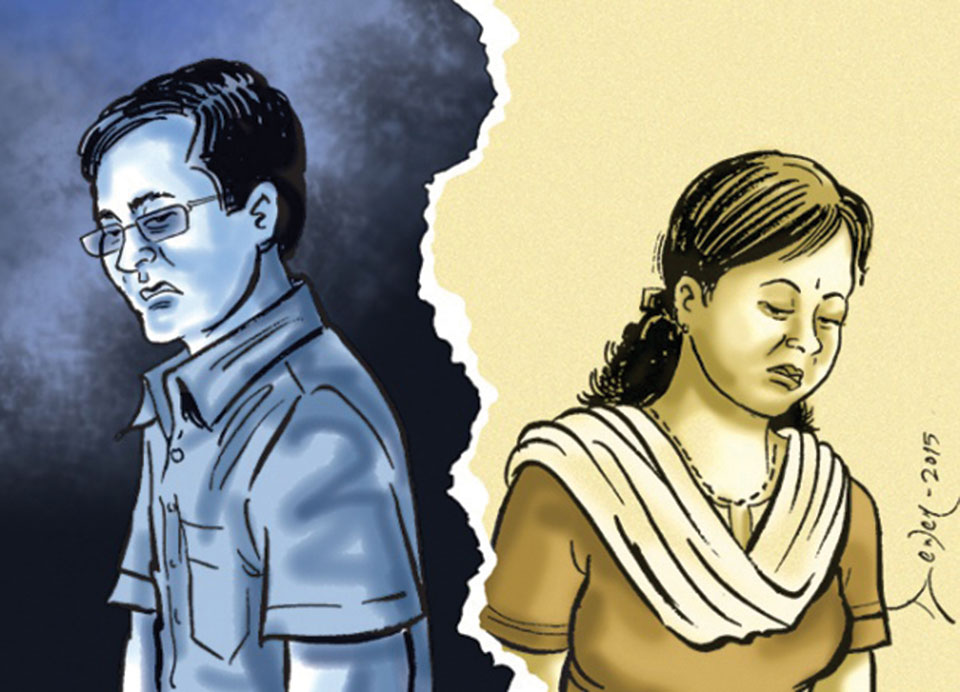 BHAIRAHAWA, Sept 25: In the past women used to initiate for divorce more than men did.  However, with the new law in practice, a number of men seeking divorce have increased suddenly. Against the average 40 to 45 divorce appeals filed per month in the past, this month the volume of such appeals reached 74 the district court of Rupandehi during the month of Bhadra. Experts ascribe the sudden surge to the newly enacted law.

“Earlier, even if they were victimized by wives, or were unhappy for some reasons, they would hardly get divorce. The law was unequal,” said sociologist Umesh Rijal. “Now, men can directly go to court and file for divorce,” he said.

Records at the district court back Rijal’s claim. While men filed negligible number of divorce appeals in the past, last month the ratio of male and female filing for divorces were close. Of the 74 divorce appeals filed at the court, men filed 33.

“This is surprising,” notes a record keeper at the court, Sanjeeb Pokharel. “It must be due to the rights given to men by the new law. Earlier, men could not come to the court directly,” he added.

Before the amendment, men seeking divorce had to go to municipality or VDC office. After one year of cooling period in the office, the case would be transferred to the court. And even in the court, men would need very strong basis for getting the ruling in their favor; while it was not the same for women, he shared.

Due to their social and economic dependency on men, women were given more liberal choices regarding divorce, says senior advocate Meera Dhungana. Laws were made considering women as the possible victims. “Laws related to marriage and divorces were made considering women as the weaker one and men as powerful. Over the time even when things gradually changed, the laws remained the same,” says Dhungana. “Now, as men can directly go to court, the numbers of divorce cases are going to rise,” she added.

Marriage and divorce laws were not reviewed for a long time. On the other hand, multiple factors have changed people’s perception and stability of marriage. A huge population working abroad was another factor why marriage with partner back home was failing. Men were raising voice that they should also have an easy exit from marriage just like women. Stories of men being victims at the hand of women were rife. In many cases, the women would move away with new husband but take away the money and property earned by the first husband. This issue had created a huge debate.

Family disintegration, management of children of parted parents and so on continues to be a matter of serious debate. However, the law has become equally liberal towards men. If they can prove that, they have shared property fairly and living away from wife, men can get divorced now. Earlier, only women had easy exit from marriage.

“In the case of women, their marriage would be over if they quit it, or elope with other man. Automatically, the marriage with the first husband comes to an end in that case, even now. But in the case of men, until the wife wanted, it was nearly impossible for men to end the relationship,” explained Dhungana.

The new Muluki codes were enacted starting 17 August. Court officials state that the change seen within a month is massive and is indicative of how desperately men were waiting for this law.

According to sociologist Rijal, divorce is fine in dysfunctional marriages. But, it is better to save marriage if it is likely to work. As per the court records, couples from 20 to 35 age group are generally the ones who seek divorce. There are few cases of elders and much younger couples as well.  “There are all types of cases, all age groups of people seek divorce. But most of them are between 20 to 35 years old,” Pokharel said.

While appealing for divorce, men can cite reasons like being neglected, abused or not taken care of by wife. Women often cite lack of support and abuse while seeking divorce. According to Pokharel, couples in nuclear families and migrant workers are more likely to seek divorce than those who are living in extended family. In some cases, there are serious reasons behind man or woman seeking divorce, but in some cases even a small matter triggers the end of the relationship. “You cannot generalize things. It could be any reason. Sometimes, even a very small matter has led to the end of a marriage,” said Pokharel.

Rijal stated that both marriage and divorce should be handled in a healthy way. Marrying in a whim often leads to hassles, he noted.

“Cases of divorces are rising in the society; it is a matter of concern. If possible, marriages should be saved. But if there are serious differences, then divorce might be fine. But in either case, matter should be handled maturely,” he said. “Unhealthy marriage is not good. Neither is it good to end a marriage recklessly,” he added.