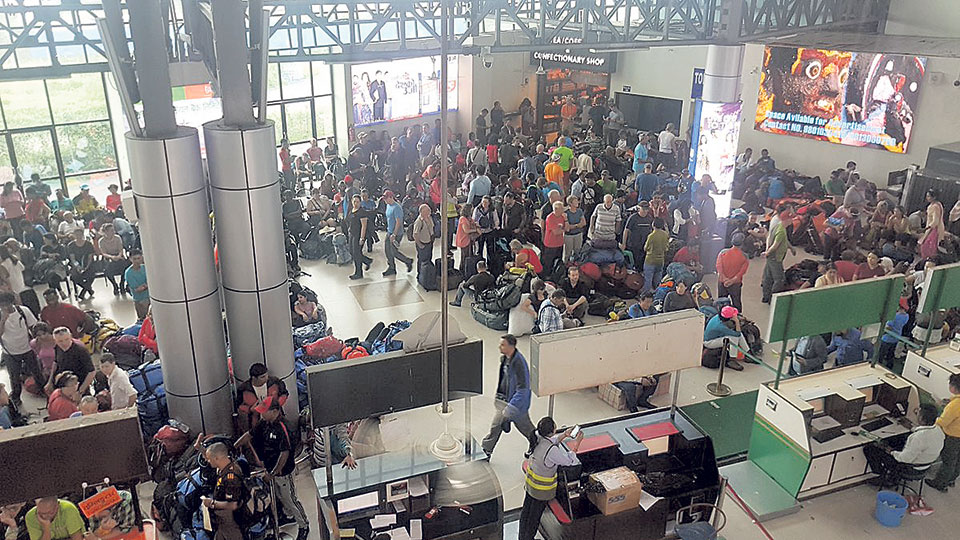 Crowds at the domestic terminal of Tribhuvan International Airport, Kathmandu, in this photo by Dr Mingmar Sherpa. (Republica)

KATHMANDU, Oct 13: With the rise in the number of air travelers in domestic routes, the domestic terminal of Tribhuvan International Airport (TIA) is overcrowded these days. However, the facilities have not improved accordingly.

Passengers hardly find any space to sit down while waiting for flights. Travelers say that they find the terminal suffocating while they are waiting for planes. According to a TIA official, the number of air travelers has increased due to major Nepali festivals and start of the tourist season.
The passengers have to wait for hours, in congested and suffocating lounge of the airport, for flights that are often delayed.

Dr Mingmar Sherpa, a passenger who was travelling from Kathmandu to Dhangadi two weeks ago, had a really bad experience at the airport.

“I was going to Dhangadi from Kathmandu on October 4. My flight was delayed for two hours,” Sherpa said, “I find difficult to wait inside the terminal. It was really congested with a big crowd. There was not even a proper space to sit.”

He said it was hard to breath in the suffocating air in the waiting area.

Sherpa said that the passengers, many foreign nationals among them, had to sit here and there on the floor. They were even sleeping on the floor, he added.

When Dr. Sherpa returned to Kathmandu on October 11, he tweeted “Hell in a Cell- No place to sit, no place to stand, no fresh air to breathe, TIA Airport Domestic terminal-Kathmandu."

According to TIA officials, around 400 domestic flights operate from the airport every day. Though the terminal was expanded to meet the need for increasing number of flights, it is still not enough to accommodate the huge number of passengers, said Prem Nath Thakur spokesperson for TIA.
“We are trying our best to resolve this problem,” Thakur said: “Airlines are increasing their flights, which ultimately increases the number of passengers. Indeed this is a tourist season. The festive season too has increased the crowd.”

Lack of space is already a problem for the passengers waiting in the terminal. Frequent delay of flights make matters worse for them.

Januka Lamichhane, a traveler flying to Bhairahawa from Kathmandu, said: “Our flight was scheduled for 5 pm on Wednesday evening, but it took off only at 5:40 pm. Not only ours, five flights of different airlines were also delayed on the same day.”

She added that the flight delays caused a huge crowd in the small space of domestic terminal. Kesav Lama, a traveler returning from Dhangadi on Thursday afternoon, said that he often had to stand for long in the waiting area of the domestic terminal.

“We travel frequently, and we always have to face this problem,” Lama said: “There are not enough seats in the waiting area. We find it hard to get a place to sit even on the floor.”
According to TIA officials, air traffic is the major reason for flight delays.